In 1953 the family Car Cruiser, with a new bay window, was lavishly decorated for the Coronation celebrations 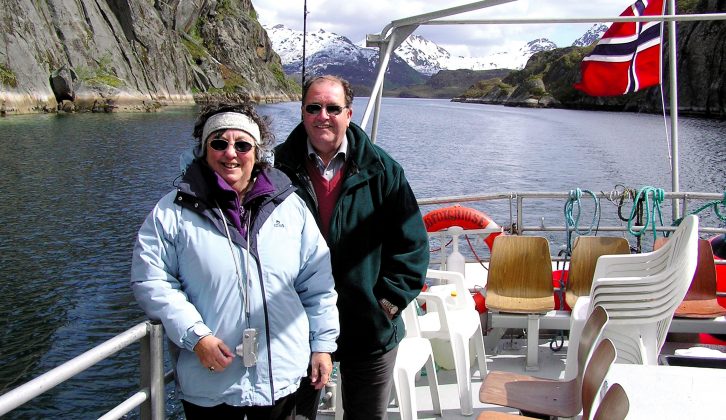 A helicopter landed nearby as the couple were admiring a viewpoint! The icy approach to the Arctic Circle Jack at the Nordkapp at midnight on their Arctic adventure

Last year marked Jack and Anne Hartley’s 57th wedding anniversary, but they also have another unending love – life with a caravan.

We all know the appeal, travelling and seeing the world with all the creature comforts of your home from home, and these two certainly know how to make the most of it.

Jack’s and Anne’s families were regular rally-goers as they grew up, with the pair fatefully meeting at a Christmas rally at Jimmy Nelson’s Sports Club in 1954.

“We were all part of a ‘gang’ of teenagers who met up at rallies. We got engaged in 1958, again at a Christmas rally, and married in September 1960,” Anne says.

To continue their caravanning traditions, their 57th wedding anniversary was celebrated at a Vanmaster meet in the Lake District. They have plenty more adventures up their sleeves, and plenty of miles behind them.

Anne was introduced to the touring lifestyle at just three months old, in March 1941, when her parents took her on her first caravan holiday – the first of many, as it turned out.

The family had an old Armstrong Siddeley, towing a fairly new Car Cruiser, a caravan that Anne still thinks of very fondly.

However, life in Britain as Anne grew up wasn’t quite as conducive to touring as it is now. Her family spent the summer holidays not far from home.

“My parents took us away in the caravan to Cleveleys, near Blackpool, for summers by the seaside. We only lived in Bury, Lancashire, so it wasn’t far, but it was the war years and petrol was rationed, so long-distance touring, as we do now, was not really possible until I was five years old.”

In the intervening years, though, the pair have ventured much farther afield – even winning the European Tourer of the Year award in 2005 – and don’t intend to stop doing so any time soon.

“We just love the caravan, because it enables us to go where we want, do what we want, eat and sleep when we want, meet like-minded people, and see all the wonderful sights of the countryside across Europe.”

It was never just about their adventures, however.

The pair have helped countless others to enjoy caravanning holidays during the 23 years that they owned and ran Fell End Caravan Park, near Milnthorpe.

By the time they stepped down in 1993, they had achieved a Calor Gas ‘Best Park in England’ award and two ‘England for Excellence’ silver awards from the tourist board.

Now it was definitely time to take their hard-earned retirement and fulfil their own travel dreams!

The best of British

Jack and Anne are not daunted by long journeys or remote locations, and have a confidence that comes from years of experience.

Even before retirement, they were making the most of their ability to travel. And the list of countries they have visited is enormous, but they’ve also spent a lot of time touring the UK.

One of the first trips that Anne remembers from childhood was to Cornwall, in a time before the advent of the motorways.

“It was exciting to travel so far then. I can remember once staying overnight on a car park at Lichfield and meeting a group of Romanies, who showed us around their super caravans with cut crystal, Capodimonte figures and a silver-plated water carrier. It was a great adventure.”

Another favourite over the years was at the Festival of Britain, when Anne and her family stayed on a temporary site in Elstree and caught the tube into London for the 1951 celebrations.

“Most of our touring has been in various caravans, but we’ve also hired a motorhome to see both North and South islands of New Zealand.

“Perhaps our most memorable tour, though, was the 5000-mile trip to the North Cape of Norway. For that, we won European Tourer of the Year (presented by the Caravan Club and sponsored by Explorer Group).”

This is an accolade that Jack and Anne are, quite rightly, very proud of.

The Norway tour wasn’t all sunshine and rainbows, though…

“The floor of the van, water heater, and so on collapsed, opening up the bottom half of the caravan. We were about 200 miles north of the Arctic Circle and help was not at hand. However, with ingenuity, plenty of screws and duct tape, we managed to put it back together and complete the trip, ready for the manufacturer to carry out an excellent repair.”

With so much experience behind them, have they perfected the art of caravanning?

“We have been retired now for 23 years and spend, on average, 150 nights a year in our caravan. We bought a Land Rover Discovery for our retirement present to ourselves, and it was so good for towing, we’ve stuck with Land Rovers since. Our current caravan, a Vanmaster, was built to our own specification to have exactly what we require.”

After decades of touring, they know exactly what they want in a caravan. That hasn’t always come easily, though.

“We have had some bad moments – about the worst experience was when our one-year old caravan was written off by a fully-loaded 40-ton lorry, that crashed into us as we waited to pay at the Dartford Crossing. We missed out on our planned four-week trip to France and lost the caravan.”

The pair are happy to share their knowledge of touring, although choosing favourite sites and places to visit is inevitably difficult.

“We have been to so many good ones, it’s difficult to choose, but in England, we’d recommend Lucksall Park near Hereford. Camp Alpin, in Seefeld, Austria, and Hillerød in Denmark, take a lot of beating. And Achiltibuie in the Highlands of Scotland – the approach on mountainous single-track roads is not for the faint-hearted, but it’s well worth the effort.”

If you’re feeling inspired by this adventurous couple, why not begin planning? Anne’s suggestions are certainly a good place to start.

The pair have helped countless others enjoy caravanning holidays