Fairholme Products, based in Cardiff, had been making caravans since WW2 and had a good reputation for quality, spec and value for money Our original order form shows the breakdown of our costs 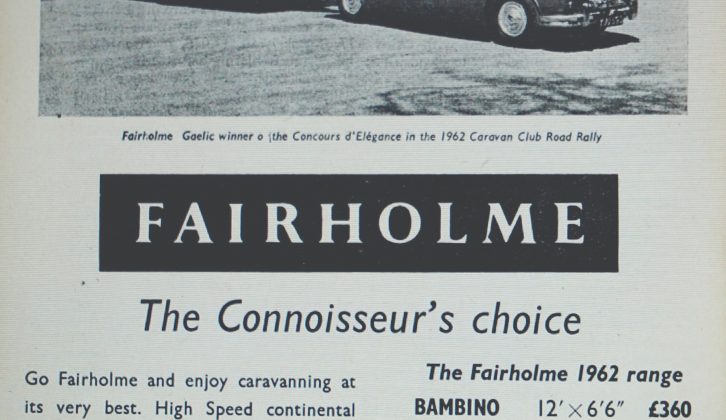 It has always been a mystery to me that cars, for valid environmental and economic reasons, have been getting lighter, while caravans have put on weight, owing to increasing size and higher equipment levels. This has probably resulted in more caravanners choosing large 4x4s for towing. Currently, apart from a couple of specialised ‘sports’ vans and a clutch of niche micro-tourers, there is a very restricted choice of conventional caravans in the 10ft to 13ft (3.05m to 3.96m) body length.

We have reached the point where anyone who appreciates a small van that’s straightforward to tow and easy to store will struggle to find one in which compromises, such as a compact toilet/shower space, have been made to save on size and weight. From our experience, we know how much enjoyment can be gained from a level of caravan simplicity. Each to their own, but we still find a lot of satisfaction in a van that is just big enough to meet our needs!

Like the Lunar Stellar, for example. Recently, while I was in the process of purchasing my well-specified Stellar Ultima dealer special, I found myself reminiscing about the first caravan we bought, a Fairholme 10-and-a-half footer, back in 1964. Did we appreciate it as much as our recent acquisition?

By today’s standards, it was woefully ill-equipped, but after years of tent camping, it seemed a palace to us. There were four 1964 vans on our shortlist, all 10ft (3.05m) or 10ft 6in (3.2m) four-berths with toilet compartments, in anticipation of the birth of our first child later in the year. These would all be compatible with our MG 1100 tow car and small enough to negotiate our narrow, sloping drive.

The 580kg Fairholme Babette T64 stood out because unlike the others, its double bed was sited lengthways, allowing part of my long frame to overhang at the end – more comfortable than sleeping crosswise in other caravans of the same 6ft (1.83m) exterior width.

The order, with Yorkshire Caravans of Bawtry, included as an extra a Whale handpump, and with the delivery charge cost just over £403, which at around £8000 in today’s prices sounds quite good value. Fairholme Products, based in Cardiff, had been making caravans since the war and had an excellent reputation.

During the three-month waiting period, we paved the back garden and converted a downpipe to be removable, to make the full width of the drive available. We fitted a towbar to our car, which involved drilling holes for the fixing bolts and strengthening plates, including in the spare wheel well in the boot floor. The road light electrics were wired in parallel with the road light supplies in the car’s rear. There was no relay or indicator to show the caravan flashers were working, but the extra electrical load resulted in the flashers operating at twice the normal speed, leaving the driver in no doubt that all was well.

The T64’s 10ft 6in x 6ft 6in (3.2 x 1.98m) body was a softwood glued and screwed frame, clad with hardboard inside and 20 gauge aluminium sheet on the outside. Before the arrival of pre-painted sheeting, the interior was hand-sprayed in pink and the exterior in Fairholme blue, with a Morocco brown waist flash and wheel spats, following assembly. Another indication of quality was the boat-shaped roof, which gave good standing headroom down the centre line, added strength and reduced the frontal area, lowering wind resistance. The windows were aluminium-framed, single-glazed glass. Walls and roof had 25mm glass fibre insulation, but the rot-proofed plywood floor was uninsulated. The one-piece door was fitted with chromed domestic door handles and a low-security lock.

Fairholme resisted the trend towards independent suspension, so the van ran on a painted B & B chassis with beam axle and semi-elliptical leaf springs, using 5.20 x 13 tyres with 8in (200mm) rod-operated, spring-damped overrun brakes. A screw jockey wheel and four wind-down legs were also provided, both not dissimilar to those of today.

Imaginatively squeezed in were a rear single dinette with tubular canvas bunk above, provided with a privacy curtain. We found this top bunk could also be hung vertically from its front support clips, to form a convenient cot. Next to this dinette on the rear offside was a wardrobe with rail, hooks, drawer and a large mirror. The kitchen was on the nearside. In the front offside corner was a pull-out settee with large dining table, forming the 6ft x 3ft 10in (1.83 x 1.17m) double bed, and on the nearside, a shallow toilet compartment, just deep enough for a bucket-and-chuck-it toilet container, with some storage space either side. The bi-fold door opened across the entrance doorway against a full-height bulkhead at the end of the kitchen, for privacy. This was a highly efficient use of space in a small van and worked well, provided nobody needed to enter or leave while the toilet was in use! Handbasins in caravan toilets were not considered necessary.

Situating the kitchen in the centre, rather than the rear, allowed for lower rear windows, improving the view through. However, owing to the lowness of our MG 1100, the view was still very limited – as you can see in the photograph above, a Retrovisor was mounted with suction cups at the front of the car roof. This periscope gave a good view of the following traffic. The kitchen itself was equipped with a surface-mounted, enamel, two-burner hotplate and grill, and a white Perspex sink and Whale handpump. This pump, with its downpipe, was an extra that cost £3.12, or £95 at today’s prices. Under the laminated plastic split worktop were two cupboards.

Two gaslights, the only means of illumination, provided plenty of light and a gentle warmth, very welcome in spring and autumn.  Spare mantles were carried because great care was needed when lighting them, to avoid the match touching the mantle and causing its disintegration. The gas bottle (always butane at this time), complete with regulator, travelled in the towing vehicle and was connected to the gas stub near the draw-bar on arrival. A gas tap was fitted on the floor by the wardrobe, for the portable gas fire. Something of a safety hazard in this small space, it had to be watched constantly.

The furniture was good quality plywood, finished in a natural wood, cross-cut-end-grain veneer, hand-sprayed with gloss varnish. This was hardwearing, apart from the matching self-adhesive edge banding, which had a tendency to curl up over time, particularly when exposed to sunlight. All drawers had a lift-and-pull action for security in transit and furniture handles were avoided in the interests of streamlining. Comfortable 5in (127mm) polyurethane foam mattresses were upholstered in blue moquette and the fitted carpet had a felt underlay.

Of the long list of minor changes and improvements that I made over my three years with this caravan, I recall several in detail. Mains hook-up was far in the future, but I always thought it was a pity that the gaslights, somewhat inconvenient if you were woken at dead of night by the young family, were not supplemented by some electric lighting. The permanent 12V live and earth in the 5-pin socket offered the possibility of achieving this, so a long two-core lead with a matching 5-pin plug was wired to the van, so it would reach the car parked next to it.

Small lights were wired in over the beds and the cooker, and in the toilet. A cigarette lighter socket was also installed, but apart from a portable reading light – a plastic 35mm film pot containing a small bulb on a long lead – there was little at the time to power from 12V. Well before 12V fluorescent tubes and LEDs, low-voltage bulbs were restricted to car bayonet-type side light bulbs and dashboard illuminating 12V torch-sized screw-in bulbs. In fact I discovered that the cream, translucent, screw-on plastic drinking cups from the top of Thermos vacuum flasks made ideal lampshades to soften the light from these car bulbs.

At that time, cars parked on the road had to use side lights between ‘lighting up time’ and dawn, risking a flat battery in the morning. However, a recent concession allowed a ‘parking light’ to be substituted and as we sometimes camped where other vehicles had access, it seemed a good idea to fit one to the van. Consisting of a torch-sized 12V bulb in a small casing, showing a white lens to the front and a red one to the rear, this was fitted to the offside of the van. Entertainment was limited to a portable radio, which I had built from a kit by the firm Heathkit, but which did not like operating inside the van on its pull-out aerial. I fitted a car radio aerial to the roof to solve the problem.

Our MG, a front-wheel drive, transverse engine, was then very modern and not well suited to the substantial noseweight built into caravans at that time. To reduce this, the space at floor level in the dinette was used to accommodate a large plywood drawer, in which we stored tinned food, drinks and other heavy items. This balanced the caravan for the MG, allowing much better grip for the front, driving wheels.