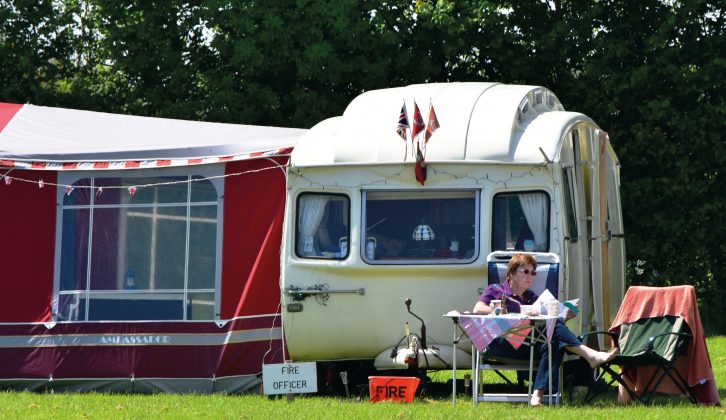 Cheltenham rallies are very relaxed and cater for all ages Tim and Shirley had wanted to downsize to a smaller Cheltenham, but retain the excellent rear-end kitchen, so the Sable fitted the bill. Tim and Shirley love the Cheltenhams’ classic lines, and the club’s friendly atmosphere Roy Fox sitting outside his 1958 Cheltenham Sable, a model that was made just two years after the first glassfibre moulds were used by the company. Roy bought the van some years ago, and gave it a touch of TLC; he also added some mod-cons, such as 12-volt strip lights, new seating and an extra locker. The original Whale hand-operated water pump and the cooker both remained in use, too The youngest Cheltenham owner at the rally was Elizabeth Salter. This was her first long tow with her Ford Fiesta and 1967 Cheltenham Fawn, which had been garaged from new Although Elizabeth Salter had “gone off caravanning” at the age of 16, she became a Cheltenham owner at 21; her parents also own one of the marque’s models. Elizabeth told us that she loves her caravan’s looks Jack and Jill Salter own this Sable, one of the last caravans built by the reborn Cheltenham company in 1980. Jack hopes to get his Sable’s Primus heating system working soon, but says that they weren’t reliable even when new! Jack and Jill Salter are pictured in their Cheltenham Sable. They are the parents of Elizabeth,  who has a Fawn, and became Cheltenham converts after owning several  modern tourers in the 1990s When the first Cheltenham Owners Rally was held in September 1955, Cecil Gardener collected all of the new-members’ fees in a hat. Although he is no longer caravanning, Cecil still takes an interest in the Cheltenham Owners’ Club, and does the odd talk on the marque for ralliers John and Tina Bradley began refurbishing Cheltenhams in the 1980s; the couple turned their bungalow and outbuildings into a Cheltenham Centre, conducting sales and repairs for the brand. They are both retired but are still active caravanners in their 1973 Fawn model; they also own a 10-year-old Vanmaster luxury tourer Jon Howard owns a Cheltenham Sable Super from 1974; it’s one of the original marque’s final vans. The Super came with certain extras fitted as standard, such as a full oven, fridge, glazed stable door and pair of chrome side strips. John has had his Sable for many years, and is the Cheltenham Owners’ Club secretary

If you’d mentioned the phrase ‘Cheltenham Caravans’ to a group of caravan enthusiasts more than 40 years ago, the room would have almost fallen silent – that’s because Cheltenham vans were once regarded as some of the best-quality tourers available on the UK luxury-caravan market. Their profile was well known by many, and owning one gave the impression that you were someone who knew their onions when it came to caravan choice.

Founded as the Summerfield Caravan Co in 1921, Cheltenham owners Arthur and Joy Gardener produced some very early motorhomes – the first in 1919, which was converted from an old ambulance – but the couple soon moved into tourers. They also changed the name of the business to Cheltenham Caravans, after the town in which they were based.

Known for the quality and light weight of its vans, by the late 1930s the company was a strong choice in what was a very crowded market of small manufacturers. Cheltenham’s models – including the Gazelle and Eland – became acclaimed in caravanning circles and, with touring growing even more popular after World War II, the brand garnered quite a following.

In 1950 the Gardeners, along with son Cecil, invited the owners of every Cheltenham to their house, Southfield Manor Farm. A marquee was set up in the grounds, and 55 Cheltenham models were brought to the event. The rally was a great success, despite the first half of the weekend being somewhat wet to say the least – some of the caravans had to be towed on by Cecil’s Land Rover!

Attendees included Ralph Lee, whose daughter Pat married Cecil Gardener some years later. Ralph was to become a long-time owner of Cheltenhams over the years, and in 1999 was awarded the OBE for his services to caravanning.

The evolution of Cheltenham Caravans

The 1960s proved hugely successful for Cheltenham, with around 300 units a year being produced. The company’s models always featured a distinctive profile, and the shape never changed.

In 1972 Cheltenham launched its less well-known Explorer range of quality, lower-priced tourers. However, the UK’s economic downturn during 1973-1974 caused Cheltenham to end production.

As a result, the name and moulds were sold to another luxury maker, Stirling Caravans of Cirencester. But just one prototype was built for the Earls Court Show, before Stirling dropped the idea and sold the moulds on to Fernden Caravans, a dealership in Kent.

From 1978 the company built models to order, kitting them out with wet central heating, electrical systems and other luxury details. However, by the early 1980s production stopped again.

Fortunately, a couple named John and Tina Bradley began renovating existing vans, and continued to do so for many years – something that helped save the Cheltenham name.

Today Cheltenham Caravans remain popular among classic-car owners and collectors, and the brand is sought-after on the classic-caravanning scene. (Take a look at our forum posts on vintage caravans.)

That’s reflected in the continuing popularity of the Cheltenham Owners’ Club, which this year celebrated its 65th anniversary. The celebration event – held at Harbury Rugby Club near Warwick – attracted almost 50 Cheltenham caravans, the same amount as during the very first rally in 1950!

Owners today are as enthusiastic as they were all those years ago, with many telling stories of their beloved Cheltenham tourers. Many vans have been restored (see ‘An evergreen classic‘, our blog about a restored 1948 Cheltenham), while others were barn-finds and simply needed a little sprucing up.

Cecil Gardener visited the club for the afternoon as part of the celebrations; he’s remained strongly linked with the group since its formation. He’s always made himself available to owners, and talks of the days when the factory was in full production, exporting caravans around the globe.

He also reminisces about the success of the Cheltenham brand in the British Caravan Road Rally event from 1954 until the mid-1970s.

During his visit, Cecil related an occasion when a customer’s new van was only finished the day that he arrived to collect it. The owner took it away on tour for a few weeks, before bringing it back to the factory for a couple of minor points to be sorted. A few hours after its arrival, a crash was heard outside – a delivery lorry had reversed straight into the caravan, writing it off!

Cecil also told us that the company considered changing the distinctive shape of its models in the early 1970s. He and his team looked at the existing outline and sketched other profiles, but kept returning to the original. And the distinctive shape only goes to increase the models’ classic status: Cheltenhams continue to attract those who love the design.

Seeing 45-plus Cheltenham models on a rally field really is a sight to behold; it takes you straight back to a time when caravanning was very different and, in many ways, still pioneering.

With its members possessing so much enthusiasm for the brand, this owners’ club certainly looks set to thrive for many years to come.