Dealer specials often start as entry-level caravans, then evolve – like this 2007 Compass Rambler The Corona had a BPW chassis, but this Rambler got a Winterhoff hitch stabiliser as well One of the exterior upgrades was a full-height GRP panel at the rear, but check for cracking near the grabhandles Upgraded upholstery graced the 2007 Ramblers, as did alarm systems and radio/CD players Check the edging along the kitchen worktop, since that is susceptible to damage 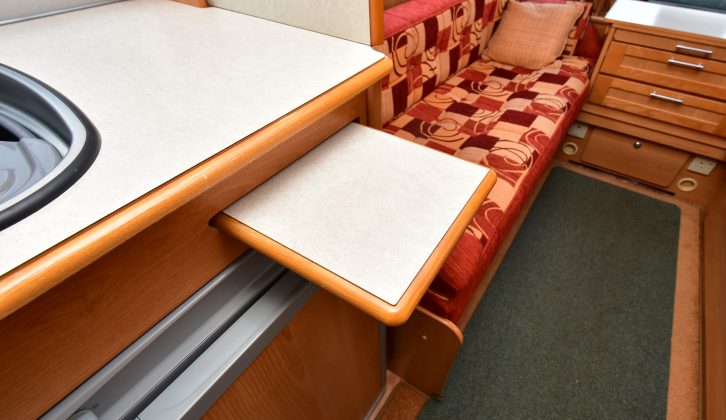 The kitchen unit has a handy worktop extension The stainless-steel sink came with a clip-on drainer Press down on the floor around the kitchen to detect delamination Check the rooflight for any sign of tree damage or leaks The central washroom in the Compass Rambler 17/5 had an ABS shower and sink, plus a manual-flush toilet The Compass Corona was a popular base for dealer specials, pretty much from the introduction of the range in 2001. One example was the Rambler line-up from Wandahome in Knottingley, West Yorkshire, which lifted the original specification of these tourers by a few notches.

In this used caravan buyer’s guide we’ll focus on the Corona-based 2007 Compass Rambler. This version came with a host of upgrades including a Winterhoff hitch stabiliser, an awning warmer, alarm system, exterior mains and gas points, alloy wheels, a wet locker and stainless-steel grabhandles. The Coronas were already built on BPW chassis and fitted with full-height GRP rear panels.

Inside, the range was equipped with radio/ CD players and upgraded upholstery above and beyond the standard Corona kit list provided by the Explorer Group, of which Compass is part.

When you go to see used caravans for sale, either at a caravan dealership or at a private home, make sure you go armed with a checklist of any known problems to look out for with that range of caravans. So, if you’re going to see a used Compass Rambler for sale, you’ll need to check the rear panel for cracks, repairs and replacements. The end panels are prone to cracking near the grabhandles. Make a note of the condition and age of the caravan tyres, too.

When you step inside a used Compass Rambler, take a good look at the cabinets, checking for peeling veneer and wear and tear on the edging strips, in case they have chunks missing or are detaching themselves. The kitchen worktop edging is the most likely to suffer damage. Press down on the floor around the kitchen to detect any sign of delamination.

Read more advice from our experts on checking the interior as well as general advice on buying used caravans before you arrange a viewing.

The Compass marque was introduced in 1979 by Siddle Cook, the founder of another brand to which he’d given a backwards form of his own name: Elddis. He started with two ranges and focused on developing a reputation for high-quality tourers at reasonable prices.

In 1998, Compass was brought under the umbrella of the Explorer Group, which already included Elddis. Four years later, it began to be used for dealer specials.

From the Compass Ramblers’ 2002 debut, they were steadily upgraded. An example of how far they had progressed can be seen in the 2007 Compass Rambler 17/5 featured here; when new, it would have cost £12,300.

Compass remained a strong brand into the first decade of this century, but the last models were for the 2010 model year, built in late 2009. Explorer Group dropped Compass a year after the economic crash of 2008. Thereafter, the Ramblers were based on the Elddis Avanté, though the Compass range was revived for 2014.

The Compass Rambler offered an aspirational specification and the prices still reflect this, so don’t expect to land a 2007 model on the cheap. The upgraded soft furnishings offer extra comfort and all the layouts are practical, including the twin-axle Rambler 20/6, which is great for large families but is hard to find. They are solidly built, but make sure you do all the checks you would when considering any other nine-year-old touring caravans for sale.

The 2007 Compass Rambler 17/5 shown here has five berths. We viewed it at Albion Caravans in Leeds Road, Idle, Bradford, West Yorkshire. Here are some quick, at-a-glance figures for it.

Consider a used Swift Charisma 540 as a possible alternative choice. This boasts the same floorplan as our featured Compass Rambler. We saw a 2006 Swift Charisma for sale at £6995; it was not as well-specified as the Rambler, but was still reasonable.

The 2007 Ramblers came with a host of upgrades including a Winterhoff hitch stabiliser, an awning warmer, alarm system, exterior mains and gas points and more