The Pegasus 554 was a less-popular layout when new, but transverse beds are now in fashion The lounge’s wraparound seating is comfortable and supportive. The last owner added handles to the lockers The transverse bed folds away and is flanked by wardrobes — all very nice, but it can’t be used as daytime seating The handbasin in the offside-corner washroom is quite large. Inspect the seal around the shower tray for gaps Alloy wheels are standard fit. This example had a mover included for the price Test the LEDs built into the grabhandles front and rear Bailey had always been a forward-thinking company, and it kicked off the biggest revolution in caravan construction with the introduction of its Alu-Tech system.

The first range built using the technique was named Pegasus, and its design was unlike that of any other tourers bearing the Bailey badge: it had a tiny front locker, fewer curves in its profile and more contemporary interiors than ever before.

Despite the gasps its looks provoked, the specification did not disappoint, starting with anti-snaking ATC and Al-Ko stabiliser, one-piece aluminium sidewalls, external gas and mains points and LED-lit grabhandles. Inside, atop the separate oven and grill, was a four-burner gas hob, a fridge/freezer and a microwave. An alarm system, radio/CD player, blown-air heating and thick, supportive seating also featured.

The layouts extended from the two-berth Bailey Pegasus 462 to the twin-axle Pegasus 624. The Pegasus 554, the company’s first transverse-bed layout, was not successful and was dropped early on. The bed was a combi-type fold-away; it would have been better had it been usable as a settee during the day.

Deep lockers, wipe-clean GRP wallboard and a well-equipped end washroom all contribute to the model’s desirability.

When you go to see caravans for sale, it’s handy to have a list of any potential problem areas to check. Starting with the exterior of the 2010 Bailey Pegasus, ensure that the LED lights built into the grabhandles work. Inspect the plastic stone guards on the front panel for fading. Take a look at the tyres – have they ever been replaced? Now look for dents in the sidewalls and make sure the exterior plastic moulding trim inserts are intact.

Now step inside to admire the interior. The floor of this Alu-Tech van can be damaged by water ingress, so keep that in mind when you view used Pegasus caravans for sale. If you feel any sponginess beneath your feet as you walk around, look under the carpet and check that the floor is sound.

Now check the plastic struts in the roof lockers, because these are prone to warping. The locker catches sometimes stick, too, so check them all.

Bailey kept the wraps on the Pegasus until its September 2009 launch; the timber-free, one-piece roof and front panel, and bolted corners impressed veteran caravanners.

What caught everyone’s attention was the 10-year warranty. As a condition, the bolts had to be checked every 12 months but, after 18 months, Bailey scrapped the procedure. The first-generation Pegasus lasted over a year.

The Pegasus 554 may have been the least popular van in the line-up; it didn’t appear in Mk2. The upside is that prices for pre-owned examples are reasonable. The other Mk1 models are plentiful on used forecourts. Its drawbacks are obvious, such as the lack of a large front locker and clumsy access to seat bases. The 554 we looked was in good condition but the last owner added handles to all the lockers.

Before you visit forecourts, why not browse through the used Bailey Pegasus caravans for sale online to get an even better idea of what’s on offer.

The Pegasus range isn’t the best-looking and its interiors feel dated now, but there are loads about, so look for the best deal. The Pegasus is distinctive and the 554’s transverse fixed bed is now trendy. The interior lighting could be better, but LED strip and spotlights are used. The seating is supportive, the kitchen is well-appointed and the storage is generous. Prices can be very reasonable.

The 2010 Bailey Pegasus 554 shown here has four berths. We viewed it at Ribble Valley Caravans and Campers in Clitheroe, Burnley Lancashire. Here are some quick at-a-glance figures for it.

Consider a 2009 Abbey Spectrum 418, which has a fixed bed, a corner washroom, great spec and high-quality cabinet work.

Or, how about a 2008 Sterling Eccles Jewel? This would costs around £9500, but it boasts a contemporary interior. Still, it is not as well-specified as the Pegasus. 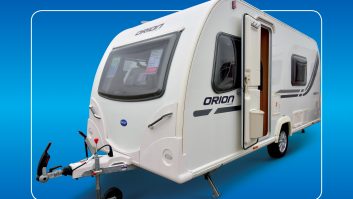