Saab’s 2.2-litre TiD engine was replaced by the 1.9, in various states of tune 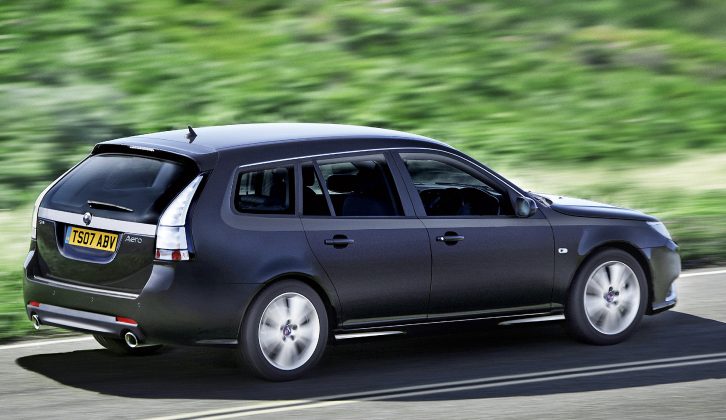 The Saab 9-3 was sold in saloon, estate and convertible form

When Saab went bust a few years ago, secondhand car prices took a hit. People were worried about their long-term viability, despite the fact that most of the parts are shared with GM.

However, the Swedish government got behind an initiative to ensure both a worldwide parts supply and a network of authorised Saab service centres. Head online to find your nearest. This frees us to start looking at the second-generation Saab 9-3.

The good news is this one isn’t based on the old car’s ancient Vauxhall Cavalier floorpan, but the all-new Epsilon developed by Saab and GM that is twice as rigid as the old unit. Suspension was optimised for ride comfort and steering response, most of the transmissions were new, and the petrol engines were lightweight aluminium chain-cam units, so there are no timing belts to worry about. Traction control, electronic brakeforce distribution and other advanced systems joined the standard equipment list.

The traditionally understated style is still there, and this more recent version takes a lot of cues from its 9-5 big brother.

The only versions sold here in the UK at first were the saloon and, from 2003, the convertible; we had to wait until 2005 for the instantly popular Sportwagon estate. Linear trim was offered from 2002, giving climate control, 15in alloys, a CD stereo, heated mirrors and a leather steering wheel. The Arc trim line added 16in alloys, leather upholstery, cruise control, an on-board computer and a chilled glovebox. The range-topping Vector got 17in alloys, colour-coded body mouldings, sports seats and metal-look interior trim. Sport Aero is like Vector but with five-spoke alloys, a rear spoiler and gutsier engine options.

Arc was dropped in 2004 and a Sport option offered on both Linear and Vector instead. A revamp in 2007 changed the trim names to (in ascending order): Airflow, Linear SE, Vector Sport and Aero, which got heated seats, xenon headlamps and restyled bumpers.

We’re sorry to report that the engine you think you want for towing duties – the 1.9 diesel in any of its forms – is the one that has the most trouble and is more likely to need expensive repairs.

Many owners have still been happy with them, but others can rattle off long lists of problems. They include: seized or broken inlet manifold swirl flaps, sooty exhaust gas recirculation valves, diesel particulate filter issues, seized water pumps that throw the timing belt off, and failed turbos and dual-mass flywheels.

Each can cost hundreds of pounds to remedy. If you must have a diesel, only buy one with a rock-solid service history and few past owners, reducing the risk of even short-term neglect.

Nevertheless, check for excess smoke, uneven running or driveline clonks. If it has an automatic gearbox, check the radiator coolant for traces of oil and the transmission dipstick for traces of water – this is because the heat exchanger between the two in the radiator can fail, leading to gearbox contamination.

Petrol units wear a halo in comparison, but have one weakness: a tendency to sludge up a too-narrow oil feed to the balancer shaft. To avoid this, change the oil and filter every 6000 miles, and have the engine flushed at every full service and as soon after you buy the car as possible. Never use a thicker- than-recommended oil either.

On early models, try rocking the steering wheel and listen for any noise as you turn the wheel. There have been failures of the upper shaft bearing; the whole steering column then has to be replaced at a cost of £900.

For once we’re not defaulting to the diesel option – any fuel savings could be wiped out by one repair bill. The petrol engines are pretty fuel efficient and there are enough higher-powered versions to make towing your caravan a doddle. The Sportwagon option gets extra points for being better-looking than the saloon and, although they cost a little more, you’ll never have trouble selling it later.

Our pick of the range is the Saab 9-3 2.0T Aero Sportwagon. Hang the extra cost and slight speed-hump vulnerability. They’re muscular, roomy and brilliant! Get a post-September 2007 model and you’ll squeeze five miles more from a gallon.

However, we’d avoid the 9-3 1.8i, a bargain-basement fleet-car special aimed at drivers who wanted to look more sophisticated than the Vectra owner next door. Even that idea didn’t net many sales.

Even the best, late, low-mile, one-owner Sportwagon is just over the £11,000 mark now, with saloons about £1000 cheaper, like for like. At the other end of the scale, scruffy, troubled and all-but-used-up saloons can be found for under £1000. For anything worth buying with a service history, you’ll need at least £1500, which still looks cheap. Add £1000 to those figures for a Sportwagon, and expect to pay a 20-50% premium on saloon prices for a convertible. There’s also a premium of 20-30% for anything with the Aero badge, though thirsty 2.8Ts can be had for little more than 2.0T models.

If you’re wondering what tow car potential the Saab 9-3 has, you’ll also want to know what it will cost to fit a towball. According to quotes we got from PF Jones, a Witter flange towbar will be £95 and a Bosal detachable towbar £166 (fitting extra). And going by quotes supplied by Servicing Stop, an interim service will come to £130, while a full service will set you back £205.

For once we’re not defaulting to the diesel option