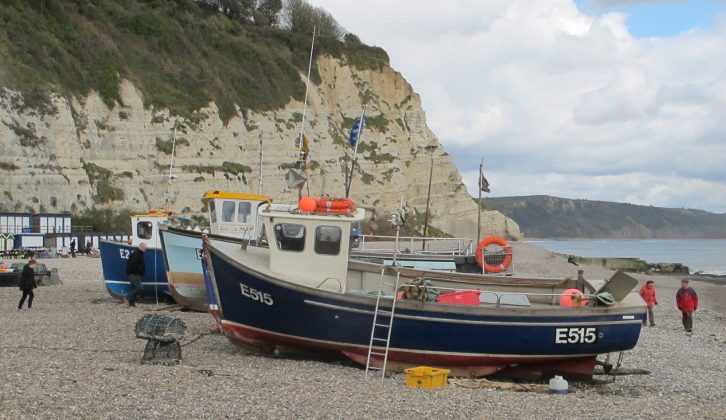 Devon’s north coast is stunning and the perfect destination for caravan holidays in the West Country, says Practical Caravan When you visit Devon, indulge yourself with a genuine cream tea Be at one with nature on your motorhome holidays in Devon, but remember that the ponies on Exmoor and Dartmoor are wild animals Enjoy the fabulous beaches when you visit Devon in your ‘van, such as Saunton Sands

Visit Dartmoor and try your hand at Letterboxing, a popular treasure-hunt pastime on Dartmoor. Collect stamps along the way to fill your logbook and leave your own trace in the visitor’s book. Or look out for the Dartmoor ponies and watch the ‘pony drifts’, where the animals are rounded up annually for a health check and foaling. Alternatively, go in search of film locations – Dartmoor was used as the location for Steven Spielberg’s film, ‘War Horse’, in addition to being the setting for Conan Doyle’s novel, ‘Hound of the Baskervilles’.

Go cycling in Devon. Hop on the saddle and take a leisurely traffic-free cycle ride along the whole or section of the 180-mile Tarka Trail, a figure of eight route based around Barnstaple and using old railway lines. Or cycle the Devon Coast to Coast cycle route from Ilfracombe to Plymouth.

Try watersports in Devon. Explore the spectacular coastline of the UNESCO English Riviera Geopark on a group canoe trip, searching coves, looking at marine wildlife and geology. Other activities in the Geopark include coasteering, rock climbing, kayaking and kite surfing.

Celebrate British maritime history. Follow the trail of Sir Francis Drake, one of England’s most celebrated maritime heroes, by visiting his former home of Buckland Abbey, and various locations around Plymouth.

Visit Agatha Christie’s house and haunts. Follow the literary trail across Devon discovering the inspirations for more than twenty of her novels, take part in the annual Agatha Christie Festival on the English Riviera, walk the Agatha Christie Mile, visit her former home Greenway, where several of her thrillers were set and even be transported there by vintage bus from Torquay – but keep an eye on the passenger behind you!

The Devon County Show kicks things off in May to get everyone involved with rural activities, while in June it is time for Croyde’s annual GoldCoast Oceanfest, celebrating music and watersports. June also sees the Lord Mayor’s Day in Plymouth, when a carnival atmosphere comes to town.

The skies above Tiverton are filled with hot air in July as the Balloon and Music Festival brings celestial colour, while September offers cerebral matter in the form of the Ocean City Festival in Plymouth, which links the city’s maritime heritage to the arts. Also taking place in September is Torquay’s International Agatha Christie Festival, celebrating the town’s association with the crime writer, as well as the Appledore Book Festival on the north coast. In October, it’s the turn of the south coast with the Plymouth International Book Festival.

Finally, for some classic English eccentricity, head to Ottery St Mary on 5 November, where you’ll find burning barrels of tar hoisted aloft through the streets in the annual Tar Barrel Rolling contest!

Naturally, the most popular time to visit Devon is the school summer holidays when weekend roads can become heavily congested.

All of Devon can be accessed using Exeter as a gateway, with the M5, junction 31 connecting with the A38 to South Devon, Plymouth and the southern areas of Dartmoor, the A380 towards the English Riviera and the A30 for the northern areas of Dartmoor. All of these sections of road are dual-carriageway, perfect if you’re towing a caravan.

From the east, the A303 linking to the A30 gives access to the east of Devon and the Jurassic Coast, in addition to connecting with the M5 at junction 29. This is a restricted junction, with access onto the M5 westbound only from the A30.

For North Devon, use the A361 off the M5 junction 27. Parts of this are dual-carriageway, with many speed cameras. There can be traffic delays as the road funnels to a single-lane at Tiverton and also when crossing the River Taw at Barnstaple. The A39 (junction 24 on M5) to North Devon is not recommended for caravans, with steep hills at Porlock (1:4 – although a small, but twisty toll road avoiding the hill runs alongside), Countisbury (1:4) and Barbrook (1:4) – and its fair share of hairpin bends! That said, the A39 is one of the best roads for stunning views of the North Devon coastline and Exmoor when exploring by car without towing.

Roads that run north to south in Devon – even the A-roads – are far from straight and often include steep hills, so if you’re towing a caravan, you have been warned! Devon’s minor roads are beautiful, but hedges are high and the lanes can be single-track, so campsites may have recommended arrival and departure times, so make sure you check prior to travel. Minor roads to the beaches are best avoided on Friday evenings and Sunday evenings, when possible.