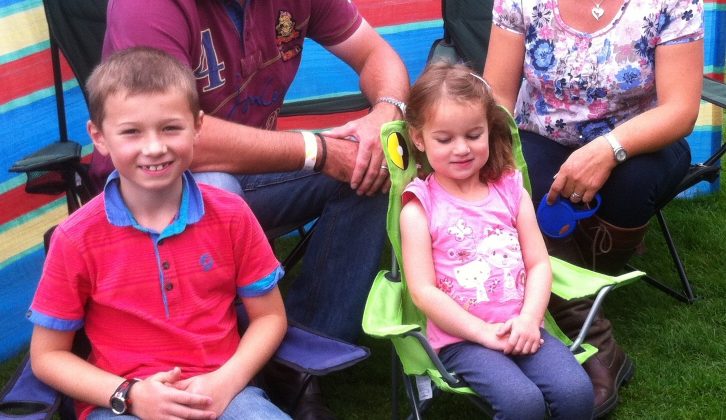 Carr’s Hill CL came in second place in the CL of the Year 2014 awards, run by the Turnbull family who live on site Coming in second, Carr’s Hill CL’s spectacular views were highly rated – what a pretty place for your caravan holidays Paul and Helen Clarke’s own dogs tested out the dog walk on site, to make sure Brunette Cottage Caravan Park CL was a great place for dog owners to stay Third place joint winners of 2014’s Sites in Bloom, Tewkesbury Abbey, had a wonderful display in front of the campsite reception

At an awards ceremony in Westminster yesterday, the winners and runners up for The Caravan Club CL of the Year 2014 were announced, followed by the Sites in Bloom 2014 awards.

The winners were announced by Grenville Chamberlain, Caravan Club Chairman, and presented by the Right Honourable Sajid Javid, Secretary of State for Culture, Media and Sport.

The Certificated Location of the Year 2014 first prize winner was Poole Farm CL, owned and run by David Hunter and Diana Smith.

Poole Farm CL is set in beautiful rolling countryside on the border between Devon and Cornwall, adjacent to the river Tamar. It’s a great place to stay if you want to visit Dartmoor National Park, Bodmin Moor and the North Cornwall Heritage Coast on your caravan holidays.

As an adult-only site, it offers a peaceful place to relax and is popular with dog owners who like to make use of the winding dog walk through the orchard and wildflower paddock. The quaint countryside theme is continued with bird feeding stations on each pitch.

David and Diana have been visiting Caravan Club CLs for years before they opened their own, incorporating their own ideas. “It is so rewarding to receive positive comments and see returning visitors,” they said, “many of whom have become friends.” Visit Devon and this CL to understand why this site deserved its prize.

Second prize for Certificated Location of the Year went to Carr’s Hill CL, owned by Grant and Gillian Turnbull. They have run the CL for four years, on 12 acres of farmland near Stirling where they built their own family home, and decided to open a CL after seeing an article in the Caravan Club’s magazine in 2009.

The Turnbulls enjoy meeting their visitors and hearing about their travels. “We believe we provide a quiet, well presented CL that offers more than minimal requirements,” explained Grant. “Since 2010 the CL has blossomed beyond belief. Both Gillian and I love meeting visitors, we try to personally meet as many on arrival as we can.” Visit Scotland on tour and pitch at Carr’s Hill CL to find out for yourself.

Third place in the Certificated Location of the Year 2014 awards went to Brunette Cottage Caravan Park CL in Ty Broughton, Shropshire, Central England. This CL was opened by Paul and Helen Clarke in 2012, and has easy access to both countryside walks and the main road network, perfect for exploring Shropshire and Cheshire, as well as being a super base for when you next visit North Wales.

“Our local knowledge ensures everyone’s stay meets their needs and interests, and we enjoy welcoming a diverse range of visitors and sharing the beautiful views with them. The site has a special dog walking area, tested and approved by our own canine friends, Bobby and Heidi.”

The annual Parliamentary Reception was well attended, and both Grenville Chamberlain, Caravan Club Chairman, and David Amess, MP for Southend West, emphasised the importance of the caravan industry to the country’s economic growth.

“Access to The Caravan Club’s CL network is a huge benefit of membership and each and every CL is a gem in the jewelled crown of the overall sites network,” Grenville Chamberlain commented. “All of the 2500 CLs on the network make a massive contribution in boosting local tourism economies.”

The Rt Hon Sajid Javid also thanked the caravan industry for the continued contribution to the economy.

The Caravan Club also announced the winners of its annual Sites in Bloom awards yesterday at the annual Parliamentary Reception, in Westminster.

The awards were started by the late Alan Payne OBE, Executive Member and Caravan Club Life Member, in 2003. The presentation was attended by Payne’s daughters.

The awards were introduced to recognise the horticultural skills, creativity and attention of campsite wardens which make their sites colourful and welcoming.

They are judged based on criteria including layout and creative use of space, variety, innovation, flair and colour co-ordination, with attention given to economy and low-maintenance. Also taken into consideration is the use of plant species which suit the local environment and geographical location.

This year’s winner is Chester Fairoaks Caravan Club Site. The judges commented that the work of the campsite’s wardens “makes the reception area look like a country cottage garden, including traditional rose bushes, ornamental grasses and the friendly faces of pansies.”

Buxton Caravan Club Site in Derbyshire, Central England, took second place. It is hidden away on the site of a former quarry and the judges particularly liked the “brightly co-ordinated baskets that brighten up the shower blocks, along with the fiery red and pink welcome at reception”.

Joint third place sites Blackshaw Moor, in Staffordshire, and Tewkesbury Abbey, in Gloucestershire, in the south west of England, impressed with their adorned reception areas.

“Our site wardens are very busy people,” said Grenville Chamberlain, “so we are extremely grateful for the time and effort that they put into making sure our members and visitors get the most out of their stay on site.” Revealed: 2016 CL of the Year and Sites in Bloom winners!