We hope to hitch a caravan to a Dacia Duster EDC soon to really see what tow car talent it has! 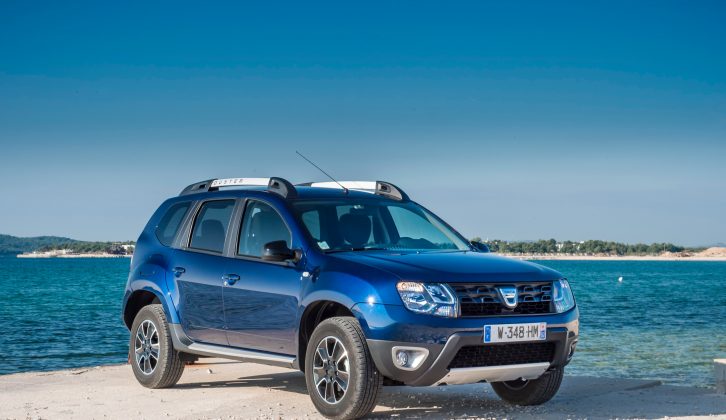 The Duster is 4.3m long and 1.6m high – the car pictured (and tested) was in Prestige trim The touchscreen works well but is perhaps sited too low? It’s no polished performer, but the new EDC auto is smooth and helps the Duster sparkle as a budget SUV

There’s something refreshing about the no-nonsense way Dacia promotes its latest addition to the Duster range: ‘The most affordable automatic crossover in the UK.’

There’s no upselling, no hyperbole, no cringe-worthy PR waffle.

If value for money is central to your next tow car purchase, and you want to buy new, take a look at Dacia – it’s as simple as that. The price that warrants that strapline is £14,995. The Duster range starts at £9495 OTR.

Dacia came to the UK in 2013. And in the same year, the Duster scooped the Best Budget 4×4 award at our Tow Car Awards; a promising start.

And now, for the first time, it’s being sold with an automatic transmission, in response to customer demand. It’s a six-speed, dual-clutch gearbox that’s only available with the dCi 110 two-wheel-drive model.

Known as the Duster EDC (Efficient Dual Clutch), this variant is powered by a 1461cc, four-cylinder turbodiesel engine. Its official combined fuel consumption is 62.8mpg, with CO2 emissions of 116g/km.

With a 1349kg kerbweight, this version of the Dacia Duster has a 1146kg 85% match figure, so it’s clearly only designed to haul lightweight caravans such as the Swift Basecamp or Caravelair Antarès 335. But as such tourers are gaining ground, lighter tow cars are coming into focus.

The Duster EDC is sold as a Lauréate (£14,995 OTR) and range-topping Prestige (£15,895). Our test car showcased the latter, and boasted standard items such as 16in diamond-cut alloys, rear parking sensors, the MediaNav 7in touchscreen and a reversing camera.

Key to Dacia’s approach with its entire range is that it wants to give owners the functionality they need at a price they can afford. And with no overblown promises, it’s not hard to be impressed.

There’s a good amount space for driver and front passenger. The door closes with a reassuring thunk and, while there are a lot of plastics around you, it manages to feel basic but not cheap.

It took a little while to get comfortable behind the wheel, because all the seat adjustment is manual. That said, the range of movement should cater for most – although the steering wheel is adjustable for rake but not reach.

Rear-seat space is adequate rather than generous. The seats split 60:40 with very little effort to give a 1636-litre boot (albeit with a step and slope at the seat base); with the seats in position it’s 475 litres.

The tailgate is light, with a handle to help close it, and there’s no big lip to lift luggage over. And while we’re considering practical matters, the wing mirrors are usefully large – making it easier to fit towing extensions – and a spare wheel is a £150 option.

On paper, 108bhp and 184lb ft torque don’t sound exceptional, yet the Duster is a pleasant drive. Under load the engine is rather noisy, but the rest of the time it’s a quiet companion.

That new automatic gearbox is also quiet, as well as pretty smooth-shifting. There’s a manual mode that may be handy when, for example, you’re preparing to overtake – although you nudge it forward to change down and backwards to change up, which seems counterintuitive.

Road and wind noise are well controlled, the latter more noticeable at motorway speeds, but not overly intrusive. The Duster rides well, too. The steering could be more responsive and lighter at low speeds, however, and the (conventional) handbrake felt quite low-set and heavy.

We do, however, have a few bones to pick with the switchgear. The sat-nav system may be good, but the screen is set too low, meaning you have to take your eyes from the road to view it.

And while it’s handy to have cruise control and speed-limit functions, the button to engage them is also low-set. It’s just under the touchscreen, so unless you’re prepared to fumble, you have to take your eyes off the road as well as your hand off the wheel to find it. That said, the buttons to set the speed, stop and resume each function are on the steering wheel and easy to use.

Features we were pleased to see included electric windows front and rear, two 12V sockets and three cupholders. There’s also a USB point just above the touchscreen, and if you plug in your device it reads it and you can play music or an audiobook with full on-screen functionality – great if you’ve miles to munch on tour.

There’s something endearingly unpretentious about the Dacia Duster. It’s cheap without ever feeling it. It is basic, but what it gives you it does well.

In fact, it’s hard to not admire its ambition and Dacia’s loyalty to its core values. If only Dacia made a larger SUV, to give an appealing option to a wider range of cost-conscious caravanners.

It is basic, but what it gives you it does well More than 1000 pre-orders for Dacia Duster