Our tow car expert was impressed when the Suzuki achieved 34.4mpg on tow Learn more about Lincoln Farm Park, a campsite in Oxfordshire, in our latest TV show If you’re looking to tow with an Avensis, this 141bhp variant is the one to go for Look inside the latest Avensis and learn why our Motty thinks it is a capable tow car, only on The Caravan Channel 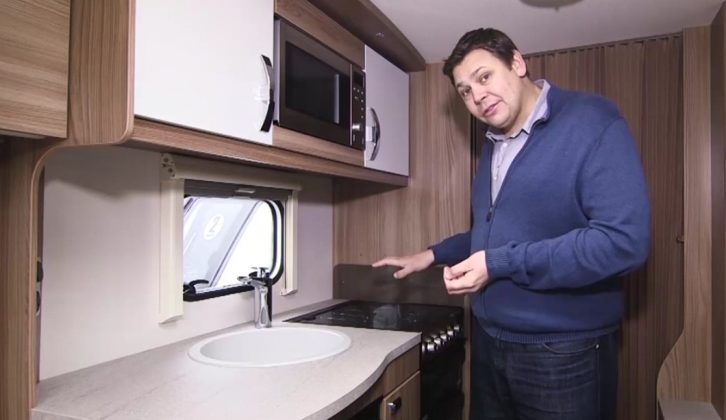 Check out Whitemead Forest Park, in the Forest of Dean, on The Caravan Channel 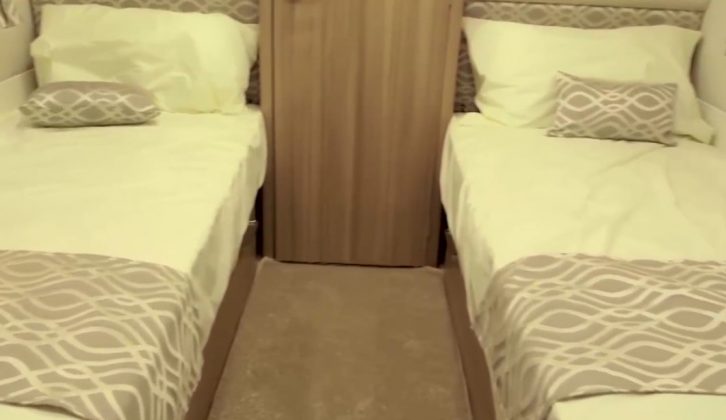 The long and very comfortable fixed single beds are, for many, the stand-out items in the 2015 Lunar Delta TS We close this episode with a tribute to our recently-departed colleague, John Wickersham

Welcome to our final TV show of 2015 – and our first of 2016! That’s right, we’re back with another packed episode on The Caravan Channel, and you can see this one between Monday 28 December 2015 and Sunday 10 January 2016. So make sure you watch at 8pm on Mondays, at 5pm on Wednesdays, and at 7pm on Fridays, Saturdays and Sundays. Tune in to Freesat 402, Sky 261 or Freeview 254, or head online and watch live on the Information TV website.

First, Practical Caravan’s Group Editor Alastair Clements reviews the new Swift Challenger 590, a single-axle, family-friendly, six-berth van. Accommodating six people yet still retaining a sense of space is no mean feat, but the 590 does an impressive job. It’s a well-built van that’s flooded with light thanks to the windows and sunroof, the light furnishings helping, too. The Swift’s kitchen is well-equipped, the worktop flap giving extra food prep space and moving into the washroom, there’s a Thetford electric flush toilet, a smart bowl washbasin and a separate, fully-lined shower cubicle. But of course, in a caravan like this, a roomy rear dinette that can cater for board games is all-important in this kids’ zone, which converts into bunk beds, opposite the fixed bunks. Watch our show to see what thoughtful touches our Al really likes about this Swift Challenger 590.

Next, our Tow Car Editor David Motton puts our-recently departed long-term test car, the Suzuki SX4 S-Cross through its paces. This 1.6-litre diesel, four-wheel-drive crossover has a 1370kg kerbweight, meaning it has an 85% match figure of 1165kg. Despite the engine’s modest capacity, the Suzuki pulled well and proved pretty economical, returning 34.4mpg when towing during our test, although it falls down in terms of refinement. It’s also a touch fidgety at motorway speeds, but never were we unduly concerned. Check out the impressive boot space on offer and see our full Suzuki SX4 S-Cross review only on The Caravan Channel.

Then we’re off to Oxfordshire, to see what you can expect if you pitch at Lincoln Farm Park, which features in Practical Caravan’s Top 100 Sites Guide 2015. A quiet, pretty site, it’s also very family-friendly, with a games room, a swimming pool, an outdoor play area and a small animal sanctuary, while adults might enjoy the gym, the sauna, the jacuzzi and the steam room. Stay here and you’re well-placed if you want to visit Oxford or explore the Cotswolds – watch our TV show and see it for yourself.

After the break, we’re back with our tow car expert Motty – and this time it’s the latest Toyota Avensis he’s putting to the test, in Touring Sports guise. The range’s 1.6-litre diesel engine from BMW has 110bhp, while the 2.0-litre has 141bhp and it’s the latter we’re testing here – it’s the one to go for if you want to tow a mid-sized caravan with the Avensis. On test, the engine’s flexibility at low revs and fuel economy on tow impressed, as did the levels of grip and the Toyota’s stability when towing. You can watch our full Avensis review on The Caravan Channel – check us out on Freeview 254, Freesat 402 or Sky 261, or watch live online.

Our Group Editor Alastair is back on screen next, taking a look around the Swift Expression 584. It’s a dealer special version of the Sprite Major 4 SB from Michael Jordan Caravans, which means buyers can expect a few extras. With this van, that includes an AKS hitch stabiliser, a front sunroof, a gas barbecue point, an outdoor power point and external access to the front bed box, while a microwave, a door flyscreen and a CD/MP3 player are among the extras inside. The smart upholstery and fully-lined curtains give the lounge a classy feel and in the kitchen, a three-burner gas hob and a separate oven and grill join the microwave. But this caravan is all about the master suite with its retractable transverse island bed. Watch our Swift Expression 584 review to see this and the van’s spacious, full-width end washroom for yourself – we think it represents great value for money.

Then we hit the road again and visit a second campsite. This time, we head to Whitemead Forest Park, set in the lovely Forest of Dean in Gloucestershire. It’s a super place to pitch your caravan if you like to be active, with things to do for guests of all ages. And even if it’s raining there’s an indoor heated swimming pool, a jacuzzi, a sauna, a family games room and a soft play area, plus a bar/restaurant. Tune in and find out more.

This is followed by another chance to watch our 2015 Lunar Delta TS review. As soon as you step inside you know you’re in a luxury van. Layout-wise, there’s a front lounge, fixed twin berths at the rear and a full-width end washroom. Day or night, the lounge is well lit and you’ll be able to keep cosy thanks to the programmable Alde wet central heating, while the back-lit cupboards in the kitchen are a snazzy touch. The fixed single beds are each 6ft 2in long and you’ll want to see the washroom, it really is something special – so be sure to catch our TV show.

Finally, we’ve a short tribute to our much-respected colleague, technical guru and friend, John Wickersham, who sadly passed away in early December.

Accommodating six people yet still retaining a sense of space is no mean feat, but the Swift Challenger 590 does an impressive job We’re on The Caravan Channel Tour London on TV with us on The Caravan Channel