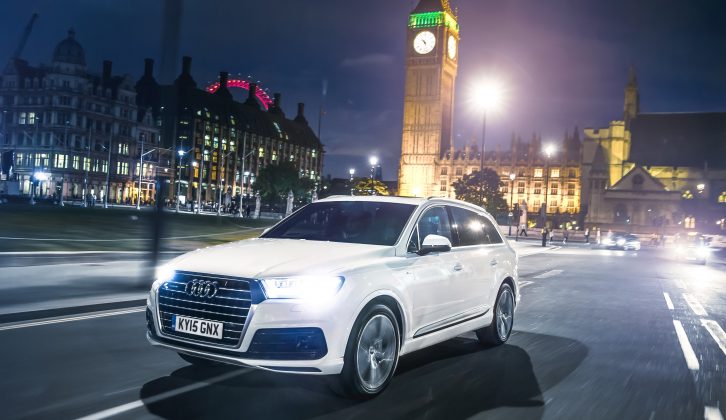 Starting at £50,340, the new Audi Q7 drives better than its predecessor and seems to have a lot of tow car potential Sharp-looking inside and out, there are two spec levels for the new Audi Q7, SE and S line The new Audi Q7 is the latest contender to take a tilt at the Land Rover Discovery’s title as the best heavyweight tow car. Although we haven’t had the chance to hitch a van to the Q7 yet to see what tow car ability it has, there are signs that it’s in with a chance of dethroning our favourite 4×4.

Audi has slimmed some 240kg from the kerbweight, which is roughly the weight of three adult passengers. The old model was part irresistible force, part immovable object; it went like stink, but the high kerbweight and stiff suspension made the Q7 drive with brutal efficiency rather than precision and finesse. The weight loss hasn’t turned a bruiser into a ballet dancer, but the Q7 does feel much lighter on its feet. The Audi turns into corners eagerly and grips hard, although the steering is light and short on feel. On the standard steel springs, body control is good but when you’re just pottering around the suspension feels a little too stiff.

Like a number of other big 4x4s, the Q7 is much improved with the optional air suspension. Audi thinks around a third of customers will tick this box, and we can see why. The low-speed ride is much better with air suspension. It’s a £2000 option on its own, but is also available as part of the Dynamic pack, which costs £2800 on SE models and £2655 on S line versions and adds several high-tech driver and safety aids.

Whatever suspension is fitted, every Q7 comes with the Audi drive select system which allows the driver to choose from different modes to suit the road and whether they feel like a caring human being (efficiency mode), a responsible parent (comfort), or want to take the long way home (dynamic). There’s also an ‘individual’ mode to mix and match between the different settings, so you can add some weight to the steering but keep the throttle and gearbox smooth rather than sharp.

This feature really comes into its own on air-sprung cars, as the suspension also alters. In dynamic mode with air suspension, the Q7 comes closest to challenging the Range Rover Sport and Porsche Cayenne for driver appeal, with excellent body control at speed and welcome extra heft to the steering.

All that muscle combines with the lowered kerbweight and the quick-shifting eight-speed auto to achieve a 0-62mph time of 6.5 seconds. That’s quicker than a Discovery or the new Volvo XC90. Towing a big twin-axle caravan up to speed should be pretty straightforward for a car that accelerates so hard in normal driving.

The Audi has another advantage over the XC90 – the noise it makes. Whereas the Volvo’s four-cylinder engine sounds dull, the Audi has a proper, smooth, six-cylinder soundtrack. For a diesel it rests very easy on the ears.

It’s on the same page as the XC90 for emissions, an area where both cars thoroughly trounce the Discovery. The Audi emits 153g/km of carbon dioxide, which puts it in the 28% bracket for company car tax. That’s one band higher than the cleanest versions of the XC90. However, when the 218PS model arrives with a provisional figure of 144g/km, the lower powered Q7 will sit one band below the XC90.

Private buyers will have a close eye on fuel bills rather than company car tax bands, and the 272PS model achieves 47.9mpg on the combined cycle. If the 218PS model’s anticipated numbers are officially confirmed, it will achieve 52.3mpg. Even if real-world figures fall some way below these, the Q7 should still comfortably outperform older, heavier 4x4s in terms of everyday fuel economy.

Ageing models, the Discovery included, will also struggle to match the showroom appeal of the Q7’s cabin. It really is beautifully put together, with lots of room for passengers in the front and the middle of the car. The third row is more cramped, but the middle seats move well out of the way to make access relatively straightforward.

With all seats upright there’s a small but usable boot. The third row lowers at the touch of a button to give 770 litres of luggage space, and with the second row folded there’s a huge 1955 litres to fill.

So, if you’re deciding what tow car to buy, is the new Audi Q7 now the best heavyweight tow car? We should find out soon enough, as several of the cars on Audi’s launch event were fitted with an electrically folding towball which lowers into place and retracts again at the prod of a button. It costs a whopping £1300 as part of the Trailer pack, although your money also buys 13-pin electrics, a trailer stability system, and Trailer assist to help drivers reverse. It’s similar to the feature available to Volkswagen Passat buyers, and takes control of the steering while driving backwards with a trailer or caravan hitched up.

The towball has a maximum download of 115kg on cars with steel springs, rising to 140kg for cars with air suspension. Other important numbers include the 2800kg legal towing limit for cars with steel suspension, and the 3500kg limit for air-sprung models. The kerbweight is 2135kg (including 75kg for the driver not included in Audi’s published kerbweight), which gives an 85% match figure of 1815kg. Given the Audi’s firm control at speed in solo driving, it would be a surprise if the Q7 didn’t prove a stable tow car pulling a caravan of that weight.

Prices start from £50,340, which makes the Audi more expensive than either the Land Rover Discovery or the Volvo XC90, although it undercuts the Range Rover Sport by more than £10,000. According to Audi’s PR man that means “middle-earners can afford a Q7”, although I suspect his definition of “middle-earner” is rather different from yours or mine.

There are two levels of spec and a whole host of options. SE is the more affordable of the two, and comes with xenon headlights, an 8.3-inch colour display, dual-zone climate control, the Pre-sense emergency braking system, leather upholstery and more. S line models have a more aggressive design theme, inside and out, as well as extra equipment including four-zone climate control (so a third and fourth passenger can choose their own temperature). There’s no shortage of high-tech gadgetry to add if you delve into the list of extras, such as head-up displays and mobile internet services.

We’re planning a tow test of the new Audi Q7 in the autumn, so we’ll let you know how well it tows when we’ve had the chance to put some miles on one with a caravan behind it. For now, suffice to say anyone looking for a luxury seven-seat 4×4 is spoilt for choice.

Given the Audi's firm control at speed in solo driving, it would be a surprise if the Q7 didn't prove a stable tow car