Venus models have been given a considerable boost in spec for 2019, with a radio/MP3 player, dual-fuel hob and a new oven and grill unit. Model pictured is the six-berth 590/6 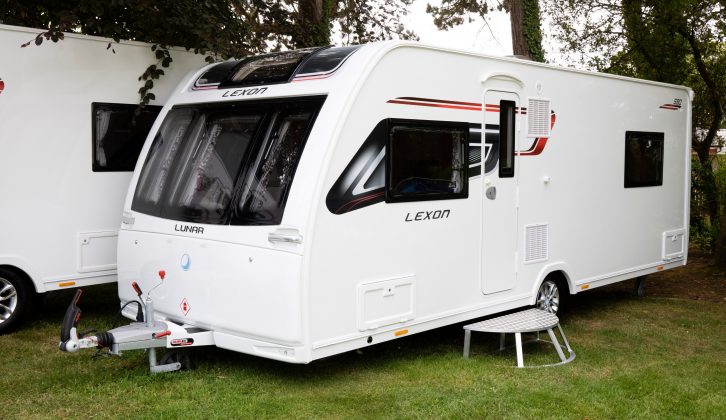 Soft furnishings in the 2019 Lunar Lexon range are ‘Verezzi’, the same scheme as fitted to the Quasar line-up. Model pictured is the Lunar Lexon 590 With the comfort and convenience of an island bed as the main attraction, the rear bedroom in the Lunar Lexon 590 feels like a comfortable place to be For 2019, Lunar Clubman vans, like this SE, get ‘Loano’ soft furnishings and ivory locker doors. They have also been enhanced with DAB radio sets and new spotlights complete with USB sockets The 8ft-wide Alaria line-up is Lunar Caravans’ top-end range. All models, including this transverse island-bed TI, get different self-levelling systems for 2019 The Preston company says that with the market now not as buoyant as it was a year ago, the 2019 season is due to be a year of consolidation.

But nevertheless, the Venus range has been given a considerable boost in spec, with a radio/MP3 player, a dual-fuel hob, a Thetford K series oven and grill and a Sharp microwave all being included as standard on the inside, while an AKS stabiliser, alloy wheels, a spare wheel and carrier and and external locker door are a standard fitting outside too.

The new Venus also features a graphite gas bottle locker at the front, along with new skirts, wheel arches, a full A-frame, and a skyview rooflight down the central aisle.

The Ariva/Quasar range gets a new eight-foot wide model, the 686. This replaces the 586, and will include a side dinette with a rear fixed corner bed next to a corner washroom. The model was still being worked on at launch, with fresh changes likely to be made in the type of shelving between the fixed bed and the washroom and the type of table used in the side dinette. The completed model should make its debut at the Lawns show in September.

The range as a whole gets redesigned locker doors, and the same new Thetford oven and Sharp microwave as the Venus. Soft furnishings, however, have moved slightly away from last season’s Joules-inspired floral patterns and now come in ‘Vienna’, while corner lockers are in ‘Montana Oak’ and locker doors in ‘Matt Magnolia’. The control panel is now flush with the caravan wall, while the satellite TV finder has been moved to a more easily accessible location.

The Stellar/Lexon range has had the same internal improvements as the Quasar, with soft furnishings in ‘Verezzi’.

Clubmans and Deltas, meanwhile, come with new graphics and new white gas bottle locker doors, while their front lounges, with ‘Loano’ soft furnishings and locker doors in ivory, have been enhanced with DAB radio and new spotlights complete with USB sockets. Kitchens have been improved with the same new oven and microwave but also with posi-locks on the overhead locker doors and a better securing mechanism for the sliding baskets.

The Alde heating system is now controlled by a ‘Lunar Assist’ touchscreen control panel. One layout, the Delta RI, has been dropped for this season only while Lunar looks at ways of improving the arrangement of its transverse island bed.

The big change in the upmarket Alaria brand, meanwhile, has been the choice of levelling system. Alarias were the first Lunar-manufactured vans to be 8ft wide, and last year they were produced with an E&P levelling system.

This year, however, they come out on a system that Lippert Components has been working on with Lunar for over a year. This attaches directly to the undercarriage – thus requiring a super-strength floor – and is said to drain less power from the battery and require less calibrating than the old system.

There could well be a difference in price too, because although 2019 Alarias now also come with the same new USB reading lights and DAB radio as the Lexon, the same new oven and microwave and the same new ‘Lunar Assist’ control panel, prices for all three models have only gone up by £200 to £33,799. As with the Delta range, the Alaria RI has been deleted this year for the same reasons.

Overall, Lunar has also spent the last year taking a wider look at its construction processes. For all ranges, this has involved a reduction in the number of visible screw cap fittings and a reduction in knock-in edging.