Prices for the new Renault Scénic and Grand Scénic start at £21,445 As before, if buyers want seven seats, then there’s the Renault Grand Scénic One gripe we have is a lack of legroom in the rear, while the third row in the Grand Scénic is really only for children 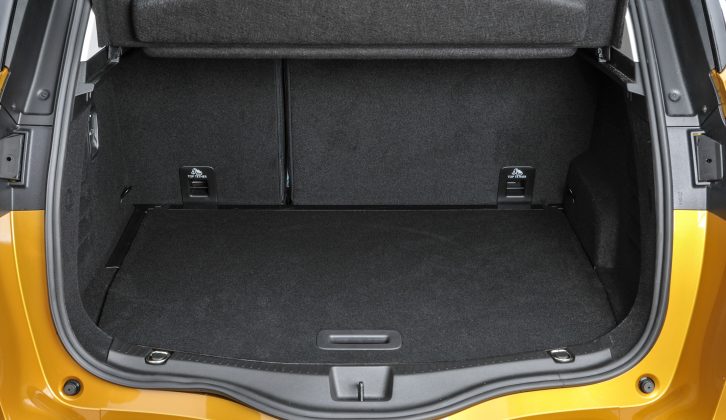 At the touch of a button, the rear seats fold away – the new Scénic is a very practical proposition Renault hopes the new Scénic proves that practical can be pretty, too ‘Radical’ might not be a word you’d associate with the Renault Scénic. But after driving the new model, we think it’s spot on.

The original model kicked off the compact MPV category back in 1996. It’s now onto its fourth generation, and the new version is probably the most dramatic change in the Scénic’s 20-year history.

Gone are the boxy, mundane looks of a school-run special. Renault’s designers have given the new Scénic the sharper, more dynamic lines of an SUV.

Customers might need an MPV, but they want an SUV, Renault says, and the new Scénic promises the practicality of one with the style of the other.

As before, the range is split between the standard five-seat Scénic and the larger seven-seat Grand Scénic.

For now, both versions are available with two petrol and three diesel engines. But what tow car ability will this give the range?

Kerbweights for the petrol five-seater start from 1503kg (including 75kg for the driver not included in Renault’s published kerbweights), but with torque outputs of 140lb ft and 151lb ft, either petrol engine is likely to struggle with a caravan in tow.

The most powerful diesel is only available with Renault’s EDC automatic gearbox. A hybrid model, matching the 1.5-litre engine with an electric motor, will arrive in the spring.

I’ve driven the 108bhp diesel in the five-seat Renault Scénic, and the 128bhp engine in the seven-seat Grand Scénic.

In everyday driving, the less powerful diesel is the more pleasant engine. While not especially punchy it is refined and quiet.

It also delivers impressive economy and emissions, at least according to the official figures. The 1.5-litre engine returns 72.4mpg in the five-seat Scénic with a manual gearbox (70.6mpg with the EDC auto) and emits 100g/km (104g/km).

I’ve towed with this engine in the Kadjar crossover. With a modest 192lb ft of torque, acceleration was a bit sluggish with a caravan behind it.

The Scénic is slightly heavier than the Kadjar (1505kg for the manual including 75kg for the driver). And once it’s loaded with mum, dad, excitable kids, a fortnight’s holiday luggage and a caravan on the back, it’s likely to struggle.

For regular towing, the 128bhp 1.6-litre is a better choice. It’s not as quiet as the 1.5, and the official economy figure drops by around 10mpg. But torque increases to 236lb ft.

You can feel the difference immediately in solo driving. And the extra mid-range muscle will make for more determined performance with a tourer in tow.

The kerbweight increases with the more powerful engine, and as you’d expect the seven-seat model weighs more than the five-seater. A kerbweight of 1676kg for the Grand Scénic dCi 130 gives an 85% match figure of 1425kg.

It’s a shame Renault didn’t have the new 158bhp engine available to drive. This variant looks to be the pick of the bunch for towing duties.

The extra power will be useful, but it’s the 266lb ft of torque that should really make its presence felt. In terms of kerbweight, this version is actually 1kg lighter than the 128bhp diesel.

Across the board Renault quotes the same noseweight limit of 75kg. Unusually, the towing limit is also the same for the whole range, at 1850kg.

It’s worth noting that Renault describes this as a ‘driver only’ limit. Both the cars I drove had a 1500kg difference between the gross vehicle weight and gross train weight on their VIN plate.

Will the Scénic and Grand Scénic make stable tow cars? Hopefully we’ll find out early next year, but the signs are reasonably positive.

The ride is mostly comfortable. However, the Grand Scénic sits a few centimetres lower to the ground than the Scénic, and feels more inclined to bump and thud over imperfect road surfaces.

Neither car is as much fun to drive as a Ford C-Max. But both are composed at speed, which usually makes for reasonable stability when towing.

These may not be entertaining cars from the driver’s seat, but for the most part they are very practical ones. There’s lots of storage space, including space under the floor and a huge sliding centre console on all but the entry-level model.

It’s not just that there’s lots of cubbies for odds and ends. The boot has a huge 572-litre capacity (596 litres in the Grand with the third row folded). That comfortably beats all the Scénic’s key rivals.

It’s easy to make the most of the space by folding seats away. They fall flat at the push of a button, using controls by the tailgate or on the touchscreen (this feature is standard on all but the base-spec cars).

But while there’s lots of room for luggage, legroom in the second row of seats could be more generous. What’s more, there’s now a 60/40 split bench rather than the three individual rear seats of the previous generation.

The seats still slide back and forth on runners. But the new arrangement isn’t as flexible as the old car’s. In the Grand Scénic, third row head and legroom are both very tight, making these seats best for kids.

Order books for the Renault Scénic and Grand Scénic are open now, with prices starting from £21,445. There are four levels of specification, starting with Expression+.

Dynamique Nav adds items including front and rear parking sensors, Multi-Sense (which offers different modes for the steering, throttle, ambient lighting and so on), the sliding centre console, aircraft-style tables on the back of the front seats, part-leather upholstery, one-touch seat folding, and an R-Link 2 infotainment and sat-nav system, as well as additional 12V and USB sockets.

Step up to Dynamique S Nav for extra gear including a head-up display, a rear parking camera, a panoramic sunroof, an 11-speaker stereo and an 8.7-inch portrait-oriented R-Link 2 system.

All models come with a generous list of safety kit, as you’d expect of Renault. And the car has already earned a five-star rating from the safety experts at Euro NCAP.

So, the latest Renault Scénic is safe, stylish and practical, provided you can live with modest rear-seat space. There are better MPVs from the driver’s seat, but if Renault’s mission was to make the new Scénic desirable as well as sensible, then it has succeeded.

There's lots of storage space, including space under the floor and a huge sliding centre console