Dinner is served, Lego style, at the Motorhome and Caravan Show 2015 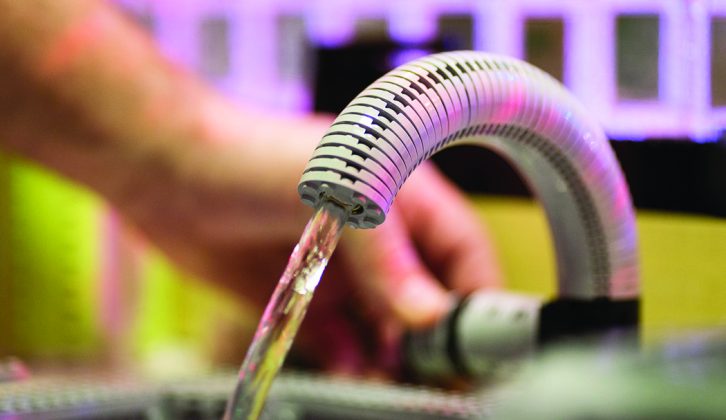 Calling this Lego [email protected] a model rather underplays it – it even has running water! The attention to detail is incredible – just look inside the fridge! See the 2016 Silver Collection Adria caravans for yourself Get inside Practical Caravan’s Tourer of the Year 2016, the Lunar Delta RI Here’s the new, stylish Metropolis scheme being launched for [email protected] caravans for 2016 See the new Sport & Fun on one of Knaus’ stands Spread across 11 halls at the NEC Birmingham and running between 13 and 18 October, the Motorhome and Caravan Show 2015 has been marked in the diaries of British caravanners for months. If you’re one of the thousands planning to attend, we hope you have a fantastic time. You certainly won’t be short of things to see.

If the choice of exhibits is rather overwhelming, we’ve put in the legwork for you, to help you get the best from the show, and have complied our 10 must-see show stars. And we’ve one other top tip: make sure you’re wearing flat, comfortable shoes!

Don’t forget to visit Practical Caravan! We’re in hall 18. Visit us to save on your subscription, vote in our 2016 Owner Satisfaction Survey and get involved in our Top 100 Sites Guide 2016.

We’re sure we weren’t the only Lego fans to be slightly-too-overexcited at the prospect of seeing a life-sized caravan, built using the famous Danish bricks, at the NEC Birmingham. And it doesn’t disappoint.

Created to celebrate 130 years of caravanning and using 215,158 Lego bricks, this clever and Guinness World Record-breaking construction took more than 1000 hours to build over 12 weeks, a true labour of love by the professional Lego brick builders tasked with the job.

It’s a model of and sat alongside a [email protected] 320 RS ‘teardrop’ caravan. It is well worth braving the crowds to see. It even has running water!

As we revealed back in May, Slovenian caravan manufacturer Adria is celebrating five decades of building caravans. And to mark this anniversary, limited-edition Silver Collection caravans are being sold. Head to the NEC and see the four-berth Adora 613DT Isonzo and five-berth Altea 472DS Eden.

3 – Lunar in the limelight

We were delighted to crown the Lunar Delta RI our Tourer of the Year 2016 and even more excited to arrive at the NEC and see the van itself, wrapped in Practical Caravan/Tourer of the Year branding and, by all accounts, being extremely well received. Visit Lunar’s stand and you won’t be able to miss it!

While you’re there, why not check out other notable models, such as the transverse island bed Lexon 560, the Lexon 580 with its bunk and side dinette, and the fixed single bed Lexon 570. Taller caravanners will also be interested in the Quasar 574 featuring an island bed with a day/night function that, with the mattress extender in place, gives a 6ft 4in-long bed, which can be retracted to ease access to the washroom.

We were very impressed by the new-for-2016 Sprite Freedom 6 TD when we reviewed it, so we’d highly recommend making time to go to see it if you’re at the NEC. In fact, all the models from this new, entry-level range from the Swift Group are there, so check out the 6 and the FB (the fixed-bed variant) too.

It’s hardly unusual for an Eriba to turn heads, so a gold-plated one was guaranteed to catch our attention!

Known by Automotive Leisure as The Skeleton, it’s been with the firm for about 10 years, since being rescued from a car park, where it was waiting to be taken to the scrapyard. Restored and proudly displaying its steel frame construction, for its NEC debut the decision was taken to bring some bling. While the wheel arches were wrapped, the sides were covered in a special sticky-backed plastic – and applying it was a painstaking task.

Sadly, once completed, the Eriba Touring Familia was too reflective to be driven on the road, so had to wear a cover and be transported to the show on a trailer!

Make sure you see it on the Automotive Leisure stand.

As well as the super Lego [email protected], head to the Adventure Leisure Vehicles stand. [email protected] is jazzing things up for 2016, revealing new exterior colours for its 320 RS and L 400 TD models. There are now three external designs to choose from. With its funky, orange outline and gas locker cover, and yellow, orange and red stripe, Mexican Sunset is the most daring. Wearing a dark outline and stylish, grey graphics is the smart Metropolis, while for those that like to keep it subtle, there’s the all-silver Basic. The 320 RS-only Offroad continues, too; the range starts at £7950.

Knaus has a bigger presence than before at this year’s NEC show with two stands, each with its own, distinct personality.

Winner of the Best Specialist Tourer category at our 2016 Tourer of the Year Awards, the Deseo Transport Plus is on the stand, proudly displaying its prize, so this is a great chance for you to see for yourself why we rate this van so highly. Alongside are the Deseo Plus and the new-for-2016 Sport & Fun.

And we look forward to seeing Knaus’ new range of competitively-priced, UK-friendly vans, coming in 2016, bringing the brand’s European flavour with the convenience of popular British kit.

Trigano Group sub-brand Mini Silver has its own stand for the first time at the show, underlining the increasing popularity of such lightweight vans. And for 2016, new exterior graphics make the company’s 270 and 290 models (both of which have MTPLMs of 750kg), really stand out. Choose from Outdoor (green), Lagoon (blue) and Safari (orange).

Priced to entice people to try caravanning, the Mini Silver 270 starts at £7995 and despite being less than 4m long and just over 2m wide, it can carry motorbikes or maybe a wheelchair, with tie-down points to keep your items secure in transit. Definitely worth a look.

Folding caravans might be of niche interest, but as a way of converting new people to caravanning, this Opus Moto (with a 1050kg MTPLM) caught our eye. Based on the Opus that’s been around for a few years, the new-for-2016 Moto is in its final prototyping stage – and it’s quite a bit of kit. On the road, it can carry motorbikes up to a total roof weight of 500kg. These can be loaded using ramps, or raised into position using a crane which cleverly folds away and stows in the back.

Then, in just 15 minutes, it can be folded out to create a van with an impressive three double beds. Need more space? You can add an awning. And Opus will happily colour-match the van for you, too.

Bailey is inviting you to get involved in designing its next generation of touring caravans! This new initiative, launched at the NEC, includes the establishment of Bailey Customer Focus Groups, meeting in Bristol to help shape the brand’s products. It won’t be hard to find Bailey’s massive show stand, so head there to get involved, or go online. 10 top sites for the best fish and chips