There are lots of things to do if you go to the NEC Birmingham for the Caravan, Camping and Motorhome Show Get inside the new Lunar Delta TS at the NEC Birmingham 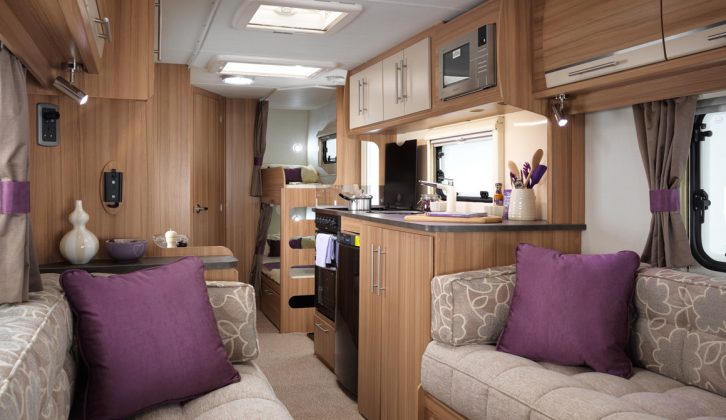 If you are browsing the caravans for sale, check out this brand new, six-berth Lunar Quasar 646 Another former Blue Peter presenter, Helen Skelton, will also star at the NEC Birmingham between 17 and 22 February 2015 Ben Fogle will also be opening the February 2015 show If you’ve ever thought about going full-time, meet the Meeks at the Caravan, Camping and Motorhome Show Dog agility is sure to be one of the more popular attractions and Olympian Sally Gunnell will be having a go!

Thinking of buying a new caravan? Or stuck for something to do during half term week? Why not head to the National Exhibition Centre in Birmingham for the Caravan, Camping and Motorhome Show from 17-22 February?

More than 80,000 visitors are expected over the six days of the show organised by industry trade body the National Caravan Council, with more than 350 stands expected showcasing everything from the latest new tourers to motorhomes, tents, camping accessories and great holiday destinations.

The show also comes at a buoyant time for the marketplace, with recent figures released by the NCC showing that sales of new touring caravans in 2014 increased by 9.2% (to 21,379) compared to the previous year, and if you’re browsing the new caravans for sale ahead of the 2015 season you’ll be able to compare all of the major manufacturers in one place at the NEC caravan show.

So, if you are Birmingham bound next week, here are our top 10 things to look out for at the spring 2015 NEC show.

Although the majority of the manufacturers save their major new-model launches for later in the year, Preston-based lightweight specialist Lunar (stand 1200) will be unveiling a pair of fresh layouts at the NEC Birmingham.

First up is an exciting new addition to the affordable Quasar line, aimed squarely at the competitive family market. The Quasar 646 is a six-berth twin-axle van featuring a pair of fixed bunks, a front parallel lounge that converts into a double, plus an offside dinette that can be converted into another couple of bunks at night. Opposite the dinette is a generous kitchen, while the washroom occupies the offside rear corner.

The second new Lunar comes from the other end of the marque’s portfolio, with a luxurious addition to its top-spec twin-axle Delta line, the four-berth TS. It’s ideal for couples who prefer to have their own beds, with fixed twin berths that flank a corridor to a huge end washroom.

2. A tourer for adventurers

The traditional tourer is not for everyone, so we are always intrigued when someone tries to do something completely different. And the latest to fit that description is the MoGo Freedom, which will be making its second show appearance in the UK after its debut in Manchester last month. This tiny van weighs in at just 350kg, and is designed to appeal to tent campers who fancy something a bit less draughty. It’s ideal if you like an active lifestyle, with space to haul bikes, kayaks and the like, yet also fits into a garage and sleeps two once you arrive on site, with lift-up ‘gullwing’ sides that give a deceptive amount of space inside. Find out more on stand 2232.

OK, so we now know that Ray Mears isn’t a caravan fan, so won’t be on hand at the show this year, but there are plenty of other outdoorsy telly types to spot at the NEC Birmingham this February. Countryfile presenter Matt Baker and adventurer Ben Fogle will be officially opening the show, and will be joined on the stage of the Experts Theatre during the week by all manner of celebrities, all extolling the virtues of holidays in the Great Outdoors. Among them will be former Blue Peter presenter Helen Skelton, Olympian Sally Gunnell, DJ Kate Lawler, comic Roland Rivron and budding British surfing talent Melodie King.

One of Practical Caravan’s very own in-house celebrities will also be taking to the stage in the Experts Theatre in Hall 3. Best-known for his encyclopaedic knowledge of caravanning history, our Andy Jenkinson will be trying to entice touring virgins into the hobby with his New to Caravanning talks, held daily at 1.30pm. Dealers are increasingly reporting a rise in the number of young families investing in tourers, and it is these potential newcomers that the industry-wide ‘Freedom to Go’ campaign is hoping to entice – and our ‘Jenko’ will be on hand to give them his top tips and invaluable advice.

5. Cooking up a storm

If you’ve been inspired by our Caravan Chef feature to be a bit more experimental in your caravan’s kitchen, or simply like to make the most of your tourer’s external gas barbecue point, there will be further inspiration appearing in the Experts Theatre. On the Friday of the show, chef and expert barbecuer Ben Tish will be demonstrating a trio of delicious dishes on the ‘barbie’, while ‘Twitter chef’, food blogger and Elddis Crusader owner ‘Caravan Larry’ will be focusing on affordable family meals that are easy to cook in your tourer on your caravan holidays.

6. Get behind the wheel

One of the most popular regular features outside the main show halls is The Camping and Caravanning Club’s free Towing Experience, and it returns to the NEC Birmingham this year. If you’re over 25 and bring a valid driving licence, you can get towing hints, tips and one-to-one tuition from the club’s experts, not to mention getting a chance to sample one of a selection of brand new tow cars on loan from Volvo.

Although dogs are not allowed into the NEC (apart from assistance dogs), fans of our canine companions can still get their fix by watching the dog agility displays in Hall 4 – and Olympic gold medalist Sally Gunnell will even be having a go at the course herself, with her dog Diggy, when she takes a break from speaking about health and fitness in the Experts Theatre on Wednesday 18 February.

If you don’t think one day at the show is enough, or you’re travelling from far away and would rather spend the night in your tourer than a costly hotel, The Caravan Club has the answer – a temporary 200-pitch campsite on site at the NEC. Taking over North Car Parks 10 and 11, the site will be open from 11am on 16 February until 10am on 23 February and costs £30 per night including 6A electric hook-up and evening entertainment! Call 01342 336 666 for details or head online.

9. The kids are alright

Mindful that the show takes place during half term, organisers have packed in plenty of fun for children bored of being dragged from caravan to caravan to check bunk lengths. Activities to keep them entertained include: a cycling challenge where they can take on their family and friends in a virtual race; an Action Zone featuring an assault course; The Caravan Club’s Tourer Explorer kids’ club and treasure trail; plus The Camping and Caravanning Club has teamed up with Aardman Animations to create a Shaun the Sheep-themed area based on the new film, which even stars a caravan!

And finally, once you have got the children inspired by the touring lifestyle, perhaps they will start badgering you to chuck it all in, sell the house and head off into the sunset with your caravan in tow. Well, if they do, then you can have the chance to find out your next step from a family who have done just that. DJ Kate Lawler will be interviewing the Meek family, who quit their jobs, sold up and took Amy (11) and Ella (9) out of school to tour the UK in search of some true quality time.

If you fancy coming along, tickets are cheaper when bought in advance online or by calling 0844 581 1250. Adult tickets are £8 and seniors £7 in advance (£9 on the door), while children of 15 years and under get in free when accompanied by an adult. That price even includes car parking and a show guide – we’ll see you there!