We’ve been to Caravan, Motor, Touristik 2018 to check out what’s new in the European caravan market This year was the 50th running of this large show in Stuttgart, Germany That fold-out section means you can have two extra berths, beyond these twin single beds Again, there are beds that would be great for kids, beyond those intended for adults in this Dethleffs caravan And check out this Dethleffs Coco concept! This is the Adria Action 391 PH, a variant that is not going to be available on the British market Inside the Action 391 PH, a pair of berths are located across the front of the van This classic outfit was on loan from the Erwin Hymer Museum The Eriba Troll Ocean Drive has an eye-catching exterior design The two-tone theme continues inside the Eriba Troll Ocean Drive 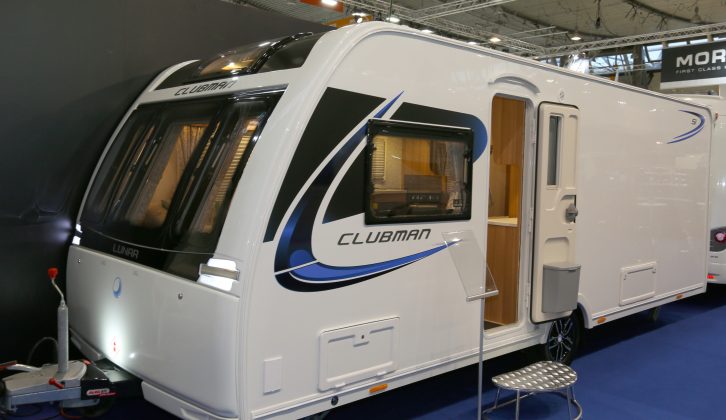 Also in attendance was Swift Group, with Challenger-based Sprite models including this Cruzer 492 SR Germany leisure vehicle and travel fair CMT (Caravan, Motor, Touristik) celebrates its 50th anniversary in 2018, and saw 85,000 visitors pass through the turnstiles over the opening weekend.

The show started on 13 January and it runs until 21 January.

CMT is the second-largest caravan and motorhome fair in Germany, after Caravan Salon in Düsseldorf, and while it doesn’t carry as many new model launches as the event held further north, there is still plenty for cara-fans to get stuck into.

It takes place every January at the Messe Stuttgart, a sprawling exhibition centre just a three-minute walk from Stuttgart airport.

Spread across 10 halls, visitors can browse new caravans for sale from a range of brands, the latest accessories and related products, and mosey through three halls showcasing holiday destinations in Europe and around the world.

A bit about the show

CMT’s origins go back to 1968, when the Motor Sport Leisure show was established.

In 1971, it started running in parallel with the Caravan Camping Touristik show, and CMT was born when the two events merged in 1973.

Over the decades, the scope of CMT has expanded to cater for long-distance travel, as well as tourism related to golf, cycling, wellness and cruise ships.

To celebrate the show’s 50th anniversary, CMT 2018’s not inconsiderable footprint was expanded with the addition of a 10th hall.

Taking place right at the start of the new model year, Düsseldorf’s Caravan Salon is the main event for those looking for an in-the-round view of the coming season’s caravan ranges, but CMT is nevertheless an ideal opportunity for manufacturers to showcase their wares mid-season, launch some new models, or test public reaction to any new developments for release the following model year.

Midwinter is a busy time for caravan manufacturers, as having sold their vans for the current season, they have to build them, as well as continuing development of future ranges and models.

Brands large and small were still out in force at CMT, so there was a reasonable amount to detain the caravan-curious in the odd-numbered halls of the Stuttgart Messe site.

Dethleffs dares to be different

Hall 1 was home to Hymer and its subsidiary companies.

To get there, you had to walk past a Dethleffs Coco in the lobby of the Messe’s eastern entrance. This concept caravan isn’t strictly new, of course, having made its debut at Caravan Salon last August.

But in a market in which German manufacturers are setting the pace with super-lightweight, futuristic vans (most notably Knaus, across in Hall C2 with its Deseo), it marks Erwin Hymer Group’s entry to the party.

The 4.25m-long Coco weighs an eye-catching 638kg. It’s a two-berth with a corner washroom and compact kitchen at the front, while the modular furniture in the lounge area can be positioned to create the living space required by the user.

Weight savings have been achieved by using modern materials and components that perform more than one function.

Another interesting feature is an L-shaped awning that fits snugly around the rear end and offside sidewall, creating a 25 m sq ‘terrace area’ – it looks impressive, but we wonder how robust it would be in a midwinter storm.

As was the case at Caravan Salon, Dethleffs is using CMT to gauge public reaction to this clever concept before considering taking it into production. Think it’s a runner? We should Coco…

Two other Dethleffs productions caught the eye at CMT. Firstly, a concept version of the c’ go 515 RE with optional Klapperker (folding bay) was on display.

This features a clever fold-out arrangement at the rear of the van, to increase the number of available berths from four to six, on a body length of 7.73m and an MTPLM of 1400kg.

The floorplan comprises a U-shaped front lounge, a midships kitchen and washroom, and a pair of rear twin single beds.

The two extra berths are formed by folding out a section of the rear wall, pushing out a sleeping surface that butts up next to the twin singles – parents would clearly have to be happy to have their brood in such proximity.

And with these extra beds being located outside the van, surely the c’ go 515 RE with optional Klapperker will be best-suited to southern European temperatures.

Staying on the Dethleffs stand, the new c’ joy 480 QLK featured a similar arrangement to the c’ go 515 RE – berths for children accessed via those for adults.

A large shelf at the windowless front of the van offered sleeping space for two, just behind a double bed formed from the parallel lounge seating.

At the rear, an optional triple bunk could be specified in place of the pair of fixed bunks, taking the berths count to an impressive seven, over 7.06m, and with an MTPLM of 1200kg.

It’s been a little while since Dethleffs caravans were sold in the UK, so sadly none of these innovations are coming to Blighty anytime soon, although they could spark some fresh thinking elsewhere in the industry.

Keeping a watchful eye over proceedings in Hall 1, from its position up on the balcony, was the UK’s very own Swift Group.

Sprite has a presence in several Continental markets, and a handful of its vans were on display.

The Cruzer range is based on the mid-market Swift Challenger and it was interesting to see the vans carrying ‘mirrored’ layouts – something that more European brands are offering in their exports to the British market.

One manufacturer that has benefited from offering British buyers mirrored floorplans is, of course, Adria from Slovenia.

Alongside its ‘mainstream’ tourer offerings, we spotted a version of the quirky Action van you won’t see in the UK – the 391 PH.

Again, this features side-by-side sleeping provision: a shelf across the front of the van offers a pair of berths, slightly above and in front of the double bed made up from the parallel lounge seating.

This ‘clamber across’ arrangement has clearly been designed so that any children on tour are first to bed and last up in the morning, but one has to hope they can master sure-footed excursions to the rear washroom in low-light conditions.

Close to the Adria stand was another member of Britain’s Big Five. Lunar Caravans was exhibiting three tourers, all with layouts handed for the UK – a Venus 590, a Stellar and a Clubman SI – alongside some of its motorhomes.

We haven’t covered many Silver caravans recently, so we were pleased to see an impressive model from the Trigano Group subsidiary.

The Evasion 430 LJ was our pick of the three Silver models on display – it’s a 5.98m-long three-berth pop-top with an overall height of just 1.98m when folded.

The space inside the 430 LJ is cleverly utilised, with a well-proportioned rear lounge and bedroom packing a pair of front twin single beds separated by a midships kitchen and washroom, and the light-toned cabinetwork makes the interior feel bigger than it really is.

With an unladen weight of just 1000kg, the Evasion 430 LJ will be an easy tow for many small tow cars.

And talking of cars, a vintage exhibit from 1959 greeted visitors outside the entrance to Hall 1. The Lloyd Alexander TS had a two-cylinder, 592cc engine producing 25PS and was hitched to a three-berth, 2.8m-long Eriba Puck Luxus from 1958 – both vehicles were on loan from the Erwin Hymer Museum in Bad Waldsee, further south in Baden-Württemberg.

Back inside the halls, Eriba had launched some ‘new old’ models.

The vans feature split exterior colour schemes – in the case of Ocean Drive a vibrant blue to ride the wave of surfing nostalgia, while Rockabilly’s rich red caters for those who find the American diner vibe irresistible.

The interiors of both editions carry colour cues to match their bodyshells, plus high-gloss white worktops and deep-pile vintage carpets.

Unlike most of what we saw at CMT 2018, the Troll 530 in Ocean Drive and Rockabilly flavours will be coming to the UK, so if you fancy one, they’ll be arriving on dealer forecourts early in the summer.