Can a mid-life facelift revive the fortunes of the Škoda Octavia Estate? We get behind the wheel 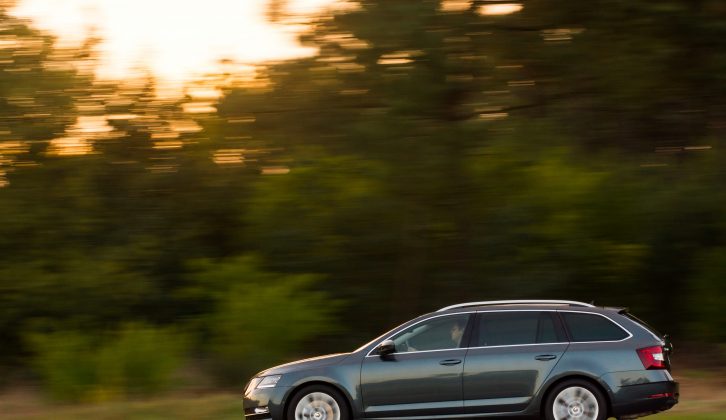 The dashboard design has been brought up to date and a load of clever gadgets are available, too, including Trailer Assist Practicality remains one of the Škoda Octavia Estate’s greatest strengths Four-wheel-drive technology adds weight, which helps matching ratios, and can be useful if you enjoy year-round caravan holidays The Octavia is, by some distance, Škoda’s most important model. Some 436,000 of them found buyers last year, and this wagon version is Europe’s best-selling estate.

It’s also a car that has proved itself invaluable to caravanners. It scooped overall honours in the 2013 Tow Car Awards and class victories in 2013, 2014 and 2015.

However, the model lost its class crown last year, and is now starting to show its age. Hence this fairly significant nip and tuck, even if it brings with it few mechanical alterations.

The most dramatic change in this mid-life facelift is the new face itself. And you will have to take my word for it – it looks a lot better in the metal than it does in pictures.

Behind that smile there are plenty of upgrades in terms of kit and spec, but mechanically it’s largely the Emperor’s New Clothes, with a slightly wider track (20mm for all models bar the vRS, which is up 30mm) the only real change.

Nonetheless, that could go some way to restoring the stability that so marked out the Škoda Octavia in previous years of the Tow Car Awards, yet blighted it in the 2016 event.

In addition, there’s a 184PS diesel for the Scout ‘soft-roader’ and the range-topping vRS, which is also offered with a potent 2.0 TFSI petrol (initially 230PS, with a 245PS version to come).

We drove several variants at the launch, but concentrated on the model most likely to appeal to caravanners: the 150PS diesel Estate in 4×4 form.

The all-wheel drive transmission adds a useful 108kg to the kerbweight, which should help with outfit-matching, though unfortunately it’s only available in SE L trim or above, which bumps up the cost. It’s also not available with the DSG auto, though the two-wheel-drive diesels are both offered with a self-shifter.

It’s inside where you’ll feel the main benefits of this facelift. The dashboard looks more modern, and there is bags of new kit – although much of it will be a cost-option.

Unless, of course, you opt for the range-topping Laurin & Klement. It’s the only model that gets – as standard – the huge new 9.2in Columbus touchscreen, though all now get SmartLink+ to bring Apple CarPlay and Android Auto connectivity across the range.

Other tech-lover’s options include a WLAN hotspot, a heated steering wheel, ambient lighting, blind-spot detection, a customisable key and Škoda Connect, which means you can monitor your car from your smartphone, and brings useful real-time navigation such as a fuel-price service that lists nearby service stations by cost.

Nervous towers will also be pleased to find VW Group’s clever Trailer Assist system among the options, which will help when manoeuvring your outfit, and there are also practical additions such as a built-in rechargeable torch as standard on estates.

None of these affect the Škoda Octavia’s key strengths, of course, which remain astonishing practicality and a thoroughly competent – if not especially exciting – driving experience. Which all bodes well when considering what tow car potential it may have.

Its steering is fluid and well-weighted and the ride pleasingly supple, particularly on cars with smaller wheels. You’re most likely to feel the benefit of the 4×4 version when pulling the van off a muddy pitch, but it also feels notably more surefooted than the front-drive car, particularly when pulling out of wet junctions.

It is still astonishingly practical and thoroughly competent