Discover who makes the best new and used caravans for sale, and which dealers deliver the best service!

Sprite caravans has made it two in a row at the Owner Satisfaction Awards, brought to you this year by Practical Caravan and The Camping and Caravanning Club, in association with Club Care Insurance.

The Swift Group’s entry-level brand took the top award for manufacturers of new caravans for sale in the UK at tonight’s ceremony.

“To win the award two years in succession is outstanding,” said Swift Group’s Group Commercial Director, Nick Page. “It is the best endorsement that we could receive.”

Sprite’s satisfaction score of 87.5% put it just ahead of runner-up Venus, another budget brand that achieved great success this year among respondents to our survey.

Top of the charts when it comes to used caravans for sale was Eriba, ahead of Abbey and 2016’s number one for pre-owned tourers, Bailey.

“We are very proud to win this award, it is a great honour,” said Andrea Kibler, Eriba’s Export Manager, “especially because it is based on feedback from our customers.”

Which are the UK’s best caravan dealers?

The survey also asks respondents to rate their caravans’ supplying dealers. This year’s number one dealer of new caravans was Salop Leisure, boasting a score of 91.1% and regaining the title it last won in 2014.

Salop Leisure’s Managing Director, Mark Bebb, was thrilled: “We are absolutely delighted by this achievement. This is a lovely reward for all the hard work and effort by the team and our continuing investment in the company.”

In the pre-owned caravans division, respondents to our survey helped to crown Swindon Caravans Group our overall winning dealer, with a score of 89.1%. Chichester Caravans was second with 88.7%.

So, what does Tom Collister, General Manager at Swindon Caravans Group, think makes the difference? “I think that we stand out because our staff have a wealth of knowledge and experience, and because we try to be as open and as honest as possible with our customers.”

Don’t miss the full, in-depth analysis of the Practical Caravan Owner Satisfaction Awards 2017 in our March 2017 magazine, on sale on Thursday 26 January.

This is the fifth year of the Owner Satisfaction Awards, but the first year it has been brought to you jointly by Practical Caravan and The Camping and Caravanning Club, and sponsored by Club Care Insurance.

We know that buying a caravan is a major purchase, not just financially, but in terms of ensuring it’s the right model for you and that you receive great aftersales support.

This is why we created the Owner Satisfaction Survey, to help fellow caravanners buy better and with confidence – and to tell the industry where it needs to improve.

It is voted for by you, real-world caravanners, the readers of Practical Caravan and members of The Camping and Caravanning Club, drawing on your experiences – good and bad – of the tourers you use and the dealers you liaise with.

Don’t agree with this year’s results? Then make sure you have your say in our 2018 survey.

The survey exists to help caravanners buy better and with confidence 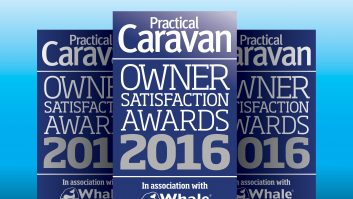 Adria and Salop star at the 2015 Owner Satisfaction Awards