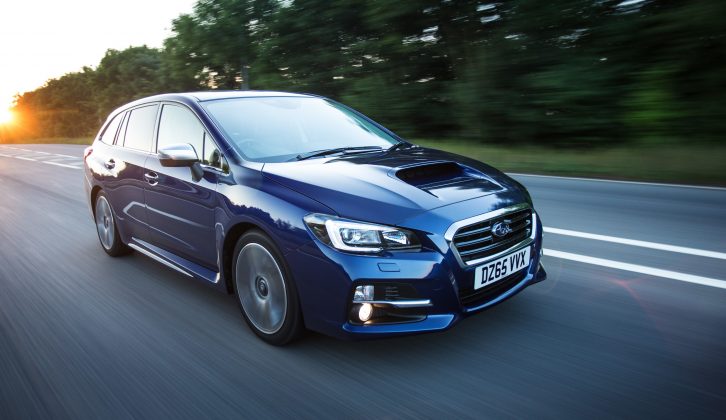 Subaru keeps things simple with the Levorg – all come with a 1.6-litre petrol engine and an automatic gearbox The Subaru Levorg’s cabin is well built and well equipped, with a sporty feel to it There’s room for three across the back, although the transmission tunnel is quite pronounced Press a button to drop the rear seats in an instant, to reveal a 1446-litre capacity with a flat floor Subaru doesn’t hide from its motorsport heritage, but it doesn’t overpower the Levorg’s styling, either The Levorg has fully independent suspension front and rear, and four-wheel drive If you’re wondering what tow car potential the Subaru Levorg has, read our first drive

The Subaru Levorg. We’d not blame you if you’d never heard of it. The model name certainly doesn’t carry the kudos of its Impreza and Forester siblings, but with a kerbweight of 1554kg, a maximum towing weight of 1500kg and an OTR price of £27,495, it could be something a little different for the canny caravanner.

That means it has an 85% match figure of 1320kg and its towball limit is 90kg. It also has a good-sized boot. Maximum capacity is 1446 litres and dropping the rear seats is a cinch, just a button-press away, or you have 522 litres with all five seats in place.

Now, think Subaru and the firm’s motorsport heritage might well be the first thing to come to mind, be that its success in the World Rally Championship or, more recently, the Levorg itself in the 2016 British Touring Car Championship, in the hands of Jason Plato and Colin Turkington, among others. And in this regard Subaru very much wears its heart on its sleeve, because walk up to the Levorg and the first thing you’ll probably see is the brand’s famous scoop on the bonnet. But it doesn’t overwhelm the aesthetics of the car. In fact, if a pretty anonymous, image-less car that still boasts handsome lines appeals, the Levorg could be for you.

Wallflower looks don’t mean it can’t stand out from the crowd on the road, though. That 1600cc engine has 168bhp at 4800-5600rpm and 184lb ft torque across a usefully broad 1800-4800rpm, more than enough to give it a pleasing turn of pace. Its official combined fuel consumption figure is 39.8mpg and it emits 164g/km of CO2. And, as you might expect from a manufacturer with such a motorsport-rich heritage, it’s good to drive.

This starts with a great driving position, the seat comfortable, supportive and with electric adjustment, the pleasingly chunky, leather-wrapped steering wheel adjustable for rake and reach. In fact, it’s a very smart, solid cabin, blue stitching throughout, the dials easy to read with eye-catching, purple illumination.

Power can take a little while to arrive, this probably due more to the transmission than the engine, but once it’s there, the Levorg is deceptively rapid and pulls cleanly, throughout the rev range. It handles well, too, turning in neatly and feeling sure-footed, even when pushed.

So the Levorg is definitely characterful, but it’s not all good. There’s no getting away from its lack of refinement. You could argue that this is part and parcel of buying a Subaru, as while the brand is known for its motorsport exploits, it’s also known for building tough, practical, reliable, go-anywhere workhorses, so perhaps it’s not surprising that the Levorg is less polished than rivals in this regard.

Road noise is noticeable (our test car was fitted with 18-inch alloy wheels), ride comfort is acceptable at best and it’s easily unsettled by rough surfaces. The brakes require a good press, too, but, once stirred, offer strong retardation. We’re sure some would be able to live with these shortcomings, maybe even think of them as part of the car’s workaday charm, but they’re worth taking into account. And, that considered, we’d be interested to see how the Levorg behaves with a caravan hitched to it.

But we said practicality is one of this Subaru’s strong suits and this is clear inside. If you want to keep the kids quiet on long drives, you’ll be pleased to hear there are two USB ports for those in the back, in addition to three in the front. Other handy bits of kit included as standard are keyless access, front and rear electric windows, heated front seats, two 12V sockets, dual-zone air conditioning, a rear-view camera (great for hitching up solo), a seven-inch touchscreen and Bluetooth connectivity.

Rear seat space isn’t bad, either, the window line low enough that it doesn’t feel claustrophobic, although it’s a bit dark with the (standard) tinted glass. And while we’ve already mentioned that the Levorg’s boot space is good and the split/folding seats are easy to drop, it has other tricks up its sleeve – there’s under-floor storage in the boot, plus cargo hooks, a light and a retractable cover. The bootlid is also easy to open and close, and there’s no lip to lift luggage over.

So the Subaru Levorg is flawed but fun. It’s also practical and something a bit different, with four-wheel drive which is great if you enjoy year-round touring or pitching at remote and back-to-basics campsites. Subaru takes care of everything Save paper by seeing the latest Subaru models on your iPad Subaru XV looks to the future