What tow car do you drive? We bet that for most of you it isn’t a cabriolet – but can a drop-top be a viable, fun tow car? Read on! Thanks to four-wheel drive and a folding hard-top, the BMW 435d Convertible has a healthy 1925kg kerbweight If the weather isn’t on your side, the BMW 4 Series Convertible looks great and offers hard-top security with the roof raised Lower the roof and you’ve only got a 220-litre boot, 370 litres with the roof raised – is this enough for your caravan holidays? 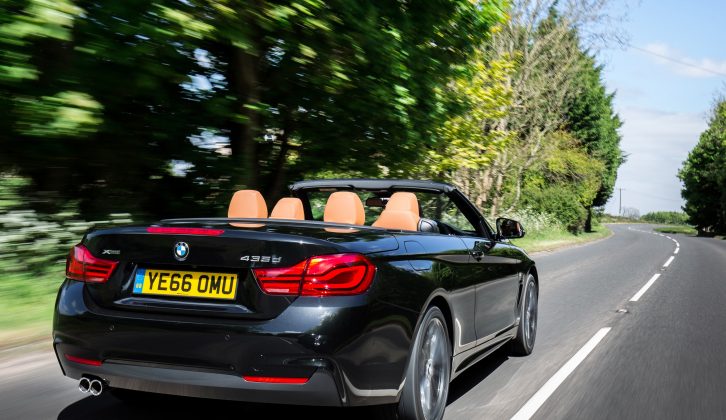 Can you see yourself towing your caravan with a convertible? Our Motty is keen to give it a go – and thinks this 435d would perform well

I have a secret. In more than a decade of testing tow cars, I have never towed with a convertible.

And you know what? I really, really want to.

I feel the itch whenever I get out in a cabriolet and the sun is shining. I think about where I could be driving to, some beachside pitch in the West Country, perhaps.

Or on beautiful warm days when I’m towing a caravan behind something sensible but dull, I imagine how much more enjoyable the drive would be with the sun on my face.

On the face of it, convertibles and towing go together about as well as sun cream and a hailstorm.

When deciding what tow car to hitch to your van and take on tour, you’re looking for something practical, and many drop-tops are anything but.

And even before practicality can be considered, a car needs to have been officially approved for towing – not all cabriolets are.

Even so, I’m still keen to tow with a drop-top. And I blame the updated BMW 435d Convertible I drove yesterday.

Not only is it among the cabriolets approved for towing, I have a strong suspicion it would turn out to be really rather good at it.

The power to pull

Like the rest of the 4 Series range, the car I drove has been revised with LED lights, some mild design tweaks, specification improvements and revised chassis settings.

You’d need to be something of a BMW geek to notice the changes unless the old and new cars are parked side by side, though.

The engines has been left well alone – and frankly in the 435d’s case it didn’t need changing. The 3.0-litre six-cylinder turbodiesel has 308bhp and 343lb ft of torque.

Those are big numbers, and the 435d really shifts, needing just 5.2 seconds to go from 0-62mph according to BMW’s figures.

If the numbers add up…

One reason to think twice about towing with a convertible is the reduced body stiffness with the roof down.

But there was no sign of any shake or flex from the 435d with the folding hard-top lowered, even on roughly surfaced roads.

Many cabriolets, even if they are homologated for towing, have relatively modest towing limits.

The 435d has an 1800kg maximum according to the spec sheet BMW supplied (the difference between the gross vehicle and gross train weights on the VIN plate was actually 1875kg).

And if you are worried about the kerbweight, don’t be. With the weight of the folding metal hard-top and all the gubbins to raise and lower it, this is a heavy car.

This BMW 4 Series Convertible has a kerbweight, including the driver, of 1925kg. That’s not far short of the weight of a big SUV, and gives an 85% match figure of 1636kg.

Four-wheel drive also contributes to the 435d’s heft. The 4×4 diesel drop-top market may seem like a niche within a niche, but sending power to all four wheels makes sense with so much power and torque, whether you plan to tow or not.

But is it practical?

But at some point we need to return to the elephant in the room – is it practical? Well, perhaps unsurprisingly, where the 435d falls down somewhat as a potential tow car is luggage space.

But the boot’s shape makes it awkward to use. And with the roof lowered, the available space drops to just 220 litres.

The rear seats are quite cramped, too. But provided there are no more than two of you, the rear bench can make up for the modest luggage space as a makeshift second boot.

Despite the high kerbweight, performance is every bit as vivid as BMW’s figures suggest. I really can’t see this car struggling with any reasonably matched caravan.

It ought to be stable, too. The car I drove came with adaptive suspension (a £515 option), which proved supple in its ‘Comfort’ setting.

As you’d expect, ‘Sport’ gave a firmer, more aggressive feel with less vertical movement. On balance, though, ‘Comfort’ is better suited to most UK roads.

We could happily live without the Variable Sport Steering, though. This £210 option means there are fewer turns from lock to lock, but the regular steering which we tried in another 4 Series felt more linear and predictable in its responses.

Even if you don’t choose those optional extras, you’ll need to be well-heeled to top-up your tan while towing with this BMW.

The updated 435d xDrive M Sport I drove has a list price of £50,670. That’s a lot, especially when you consider that the Coupé and the four-door Gran Coupé cost more than £4000 less.

You won’t be surprised to know that none of the 4 Series drop-tops on BMW’s press fleet are fitted with a tow ball.

But some day soon I’m going to tow with a convertible. I’ll keep my fingers crossed for a sunny day.