When testing to find out what tow car ability a model has, what characteristics are we looking for? Read on! Sending power to all four wheels can help maintain traction in bad weather, plus the weight of this tech can help matching ratios The best tow cars are also supremely practical, so you’re not short of space for your touring kit 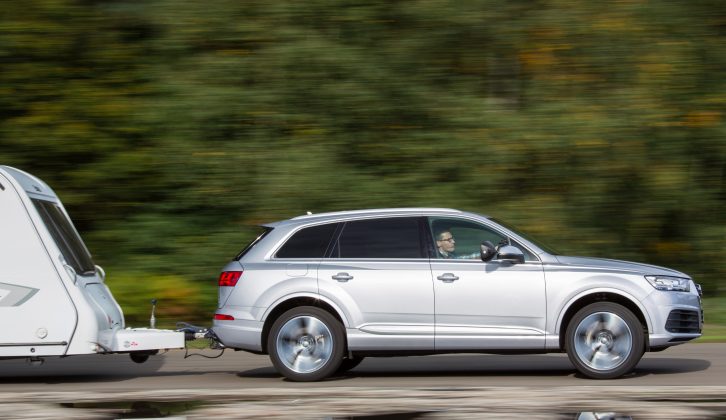 SUVs have a high centre of gravity, so they don’t always make the best tow cars We’re getting close to that time of year again. At the start of April, Practical Caravan, What Car? and The Camping and Caravanning Club will join forces to find Britain’s best tow car.

But when we’re finding out what tow car ability a model has, what are we actually looking for?

Here’s my wish-list of attributes. Any car in contention for a prize at this year’s Tow Car Awards should have most or all of them. Especially number one.

Nothing matters as much as stability. Speed, space, practicality, running costs? You won’t give a fig about any of them the moment you look in your mirrors and see your caravan swinging from side to side like a drunk staggering out of the taxi door.

Until you’ve needed to stop at the next services for a change of trousers you won’t fully appreciate just how much stability matters. A car and caravan combination might feel fine at 50mph, but a little loose at 60mph.

Then you hit a bump on a downhill stretch just as there’s a sudden gust of wind and out of nowhere your day takes a turn for the worse.

What makes a car and caravan stable? For a start, the two should be well matched.

That means a caravan weighing no more than 85% of the car’s kerbweight if you are new to towing, or no more than 100% if you are an experienced tow car driver. (Of course, if the legal towing limit is lower, that takes precedence.)

So, a high kerbweight is useful, as it makes a car a suitable match for a wider range of tourers. In general, a long wheelbase helps, too. It gives a car a planted and stable feel.

A generous towball download limit is also a plus. The 85% guideline is well known, but the 7% noseweight guidance is less well understood.

This rule of thumb recommends a download through the towball equal to 7% of the caravan’s actual laden weight, unless the car’s noseweight limit is lower. This helps anchor the caravan securely to the back of the car, helping the two vehicles to work in unison. So the higher the noseweight limit, the better.

A relatively short distance between the rear axle and the tow bar is also beneficial, as it gives the caravan less leverage on the back of the car (the law of moments, if I remember my GCSE physics correctly).

Many think of an SUV as the ultimate tow car, but a high centre of gravity isn’t ideal for towing. In my experience, a heavy 4×4 estate car can be as good a tow car or better than an SUV of similar weight, because of its lower centre of gravity.

The suspension set-up is also crucial. Sometimes cars with a ride quality which feels a little over-firm in everyday driving excel when towing. Tightly controlled, well damped suspension is vital to ensuring stability on bumpy roads.

There are a host of technologies on modern cars which help make towing safer. Electronic stability control (ESC or ESP) should recognise when the caravan is beginning to snake and apply corrective action.

Cars fitted with Trailer Stability Control (also known by various other names such as Trailer Sway Assist) are even better. These should recognise instability when towing more quickly than a regular stability control system and – touch wood – stop snaking before your palms have started to sweat.

Towing is not something to be done in a hurry. It’s an activity to be approached in a careful, calm and measured way. Burying your right foot and making frantic gearchanges to reach the top of a steep hill does not make for relaxing journeys.

A good tow car doesn’t have to be quick, but it does need enough power and torque to cope with a sensibly matched caravan. That means sufficient poke to overtake dawdling traffic, and the strength to hold speed on a gradient.

Towing shouldn’t be rushed. But you shouldn’t feel that the car is forcing you to tow slowly.

Putting a tonne and a half of mobile living space behind your car does fuel economy no favours. But it’s surprising just how efficient the best modern cars can be while towing.

If you want to keep a lid on the cost of your caravan holidays, it helps to choose an economical tow car. That’s why we include a fuel economy test as part of our regular monthly tow car tests. And it’s why the Tow Car Awards gives a Green Award each year.

It’s easy to get carried away with how a car drives, but it’s not all that matters. If you’re going away for a fortnight, the chances are you need a car with plenty of space for passengers and their luggage. We measure the interior and boot space of every car that gets the full tow-test treatment.

And any car in the Tow Car Awards is assessed by the exacting eye of The Camping and Caravanning Club’s practicality judges. They check each car’s boot space with a typical load of holiday luggage, and also look for those details which make touring easier and more convenient.

Is there a 12V socket in the boot? Are the towing electrics easy to access? Is there any warning in the handbook against using the puncture repair provision while towing? Details perhaps, but they all matter.

Many excellent tow cars, including numerous Tow Car Awards winners, are two-wheel drive. But for towing in all weathers, all year round, four-wheel drive has obvious advantages.

Traction is the most apparent, helping the driver to put the car’s power to the road on mud or wet Tarmac. But the extra weight of a four-wheel-drive transmission also makes for more favourable matching ratios.

And more favourable matching ratios makes for more stable towing. Which brings us back to point number one…

Nothing matters as much as stability