The Tour de France peloton passes through Kettlewell in the Yorkshire Dales, the sun shining and the crowds cheering Yes, even Yorkshire’s sheep went yellow as the Tour de France cyclists whizzed past them 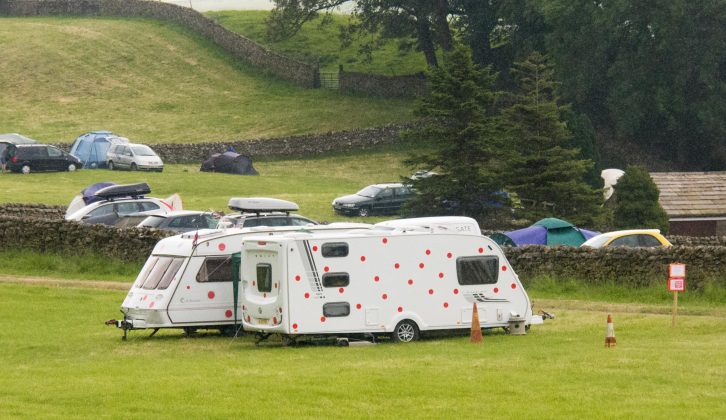 In France, Le Tour de France and camping are inseparable – but can this famous race also enrich caravan holidays in the UK? We took our van to Yorkshire to experience the world’s biggest cycle race on British soil. The question was, would we enjoy it as much as we have done in other years when we’ve been to France – and would the atmosphere be the same? Read on to find out.

It’s Thursday and we’re in Kettlewell, North Yorkshire, a picture perfect village in the Yorkshire Dales and now a sea of yellow. This small community, home to an annual scarecrow festival in August, like so many others across England’s biggest county, has pulled out all the stops to greet spectators and peloton alike. There’s yellow bunting, yellow-shirted scarecrows on bicycles and trees are strung with hand knitted yellow baubles – even the sheep have been painted yellow for the occasion, and I’m not joking. We settle in at Causeway Croft (also known as Causeway Caravan Site), a small campsite we’ve booked well in advance as it’s right by the route, but we reflect on the fact that contrary to the advance hype, there are lots of temporary camping pitches still available everywhere – and most are at very reasonable prices.

Down the valley at Kilnsey is a huge bike festival and throughout the next few days we’d see thousands of keen cyclists pedalling up the valley, heading for the climbs to experience the challenges the Tour de France Yorkshire competitors will face, or to check out a spot from which to spectate.

We get into the spirit of things by dressing our van with bunting in the colours of the jerseys worn by the leaders: yellow, green, white and polka dot, and digging out our Welcome to Yorkshire t-shirts. It’s great fun chatting with the locals and our fellow campers. Everyone is getting in the party spirit.

Friday, the day before the Tour de France route passes through, and after cycling as much as we can manage, we tour the wider area to see how other communities are welcoming Le Tour. On our route we marvel at the genius idea of wrapping hay bales in white instead of black and labelling them as giant truckles of Wensleydale cheese.

Hawes has turned red and white in honour of the climb of Buttertubs above: all the flowers are coloured thus, it seems each and every business has its own unique, quirky, creative display and some have even been repainted in white with red polka dots. We start to feel not just excited but proud, proud of the way Yorkshire is embracing this once in a lifetime opportunity, welcoming the French and putting on the show of its life.

Saturday and there are no more sleeps – it’s the day we’ve all been waiting for. Cycles whizz past the campsite all morning heading for the tops and excitement is mounting down here in the village. Locals take up their vantage points on roofs and at windows, fellow campers settle in chairs by the roadside wearing all manner of yellow clothing and patriotic headgear. With cowbells ringing and flags waving the crowd go wild as the publicity carnival known as La Caravane gets the party started. Accompanied by jingles, megaphone greetings and dancing, goodies are thrown from floats – it’s mainly advertising for the regular French sponsors, but joined this time by the likes of Yorkshire Tea and Robinsons squash. Even the police become celebrities for a day, waving and high fiving the crowd as they go.

Of course the cyclists themselves pass in a flash, a stream of dazzling, rainbow-coloured lycra, but it barely matters – everyone strains to spot their favourites amongst the breakaway group and the chasing peloton, and everyone feels satisfied that they cheered and waved hard enough to do the athletes proud.

After the race, Geoff and I drove via a steep back road on to Middleham and managed to see the race twice in one day. This would have been just possible on our bicycles, though only if you were nearly as fit as the Tour de France competitors themselves!

Returning to Kettlewell, we hear the sad news that Mark Cavendish is out of the race having crashed, but we don’t let it spoil the fun. There’s a great night ahead rounded off by fireworks – and the sun is shining!  Stage one of the 2014 Tour de France is over, but what a great day it’s been.

Sunday and stage two. Many of our fellow campers contented themselves with the ongoing village party and the sunshine, but hungry for more we decided to drive to the moors near Addingham where huge crowds have gathered, people perched high above the road on haybales, walls and the hillside itself. Yellow painted men, polka dotted babies and dressed up dogs await alongside family groups with enormous picnics and we’re all doing Mexican waves and rising cheers for a bit of entertainment.

Well done Yorkshire and thanks for the party! Let’s hope Le Tour returns to the UK soon. It was great to have the opportunity to pitch up so close to the route and we wouldn’t have missed this Grand Départ for the world!

Huge crowds have gathered, people perched high above the road on haybales, walls and the hillside itself Touring the East Riding of Yorkshire A flash of yellow See how an Airstream went green for off-grid living