ATC stability control was fitted to Lunar caravans early on The twin alloy wheels on the Lunar caravan look smart Boasting more worktop and storage space, the Lunar’s kitchen gets a design fillip from the black enamel sink As well as an island bed, the Lunar’s rear bedroom is well served by storage options and reading lamps, as well as domestic-style curtains 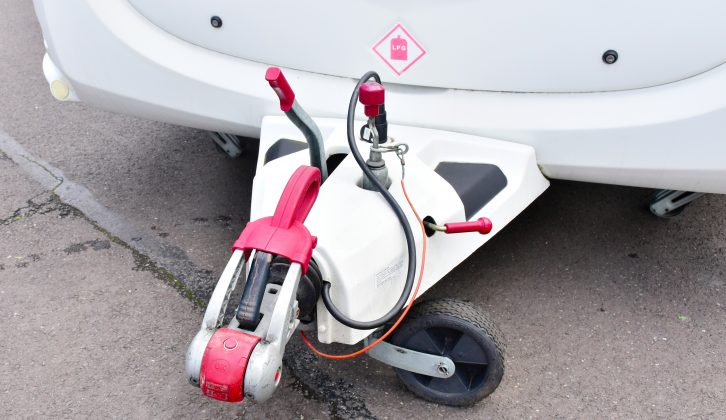 As with the Delta, smart alloy wheels are fitted to this Swift caravan This is more modern décor than the Lunar can muster but, despite the sunroof, it is not as light a space The Swift’s island-bed mattress is comfortable, but the bed must be extended for use at bedtime There’s also a tall fridge/freezer in this Swift – the caravan had a £16,495 price at the time of writing The full-width end washroom has plenty of storage, but there’s no vent However, the Swift’s washroom does feature a lined shower and a large mirror

Island beds come in two basic layouts: doubles whose head is against the rear wall, and transverse varieties that extend at night and retract to allow daytime access to the end washroom.

These have already shown up in mid-market and even budget caravans. But they started as kit-heavy, spacious, luxury models.

The good news for those of you scouring the used caravans for sale pages looking for a dose of first-class touring for less, is that the earliest of both have reached the pre-owned market.

Here we look at a model from each layout group at Barnsdale Leisure near Pontefract in West Yorkshire, with an imaginary budget of £16,000. Each had Alde heating and movers, a must with large twin-axle caravans.

Representing the first type is one from the popular Delta range of Lunar caravans, a mainstay of the brand since 1981.

The profile had changed little by the time this TI was built in 2010. The interior was traditional as well, but was boosted by leather upholstery, fitted as an option.

As Lunar’s top dog, it was lavished with goodies, including ATC stability control and an AKS stabiliser, but had standard-weight corner steadies.

Two-piece aluminium sides, a Status aerial, exterior gas and mains points and a mover all figure in the mix.

Just forward of the rear island bed is the split washroom: separate toilet and shower rooms flank the passageway to the bed.

When the new-look Swift Conqueror came on the scene for 2011, it really did turn heads. The superb, groundbreaking style and high spec made it an instant hit.

One-piece silver sidewalls, full-height GRP panels at the front and rear and a panoramic front sunroof rode on an Al-Ko chassis that, unlike the Lunar, had heavy-duty steadies but not ATC.

A mover was left on by the last owner. Like the Delta, the Conqueror sports alloy wheels.

Its full-width end washroom will appeal to many who are put off by the split offering in the Lunar. Its transverse island bed, however, will divide opinion.

The Swift’s sturdy build extends outside to its large grabhandles, outdoor shower connection and – like the Lunar – exterior gas and mains points.

The big Swift seemingly has it all, but will it be enough to overcome the Lunar’s advantage in price and weight? Let’s find out.

Both these twin-axle luxury caravans for sale at Barnsdale Leisure are attractive, but the Swift is graced with the more modern and smarter exterior of the pair.

The unitary sidewalls contribute to this advantage, as do its alloys, which are considerably sportier than the Delta’s hefty spokes.

The Conqueror’s heavy-duty steadies are easy to access and can be wound more quickly than the Delta’s. AKS hitch stabilisers are fitted to both, but the Lunar makes up ground with its ATC.

If you up sticks often to reach the next touring park on your itinerary, the Lunar’s lower MiRO (1450kg vs the Swift’s 1624kg) will appeal to you and your holiday budget, while its 230kg payload will let you take 29kg more kit than you can in the Conqueror.

Both caravans come with spacious gas lockers in front and exterior access to storage space under the furniture. Though both have awning lights, the Swift’s is LED to produce better illumination. They are also in excellent condition.

If weight isn’t an issue for you, the Swift gets the points here. If it is, the Lunar wins. In the end, we called this round a draw.

The lounges here are similar, with their parallel bench seats flanking a conventional central chest of drawers. The Swift’s has three drawers and a floor cupboard, while the Lunar has two and a lower cubbyhole.

Their seats are comfortable and accompanied by bolster and scatter cushions. The Delta’s leather upholstery puts its lounge a rung or so above the Conqueror’s, which is covered in fabric.

The Swift’s sunroof takes up space that would have been used for overhead lockers across the front, as in the Lunar, which boasts plenty of them throughout.

Heki rooflights are provided in both, as are three front windows, but the Lunar’s are deeper.

What’s more, the sunroof fails to make the Conqueror’s lounge as bright and airy as the Delta’s. Nor does the 2cm greater width in the Swift, which also has slightly less legroom. They’re both comfortable places to spend time, however.

Speakers for the Swift’s radio/CD player are in the front ceiling – the Lunar’s are under the front overhead lockers.

Night-time illumination in both includes four LED spotlamps and ceiling lights, and the Swift caravan adds lights built into the lockers. Both have alarms and good access to the bed boxes.

In fact, there’s little to separate the two in this section: it’s a score-draw here.

Both the Swift and the Lunar offer superbly well-equipped kitchens, starting with dual-fuel hobs and separate ovens and grills while, across the aisle, the tall fridges each boast separate freezer compartments.

The Lunar has a microwave fitted above its fridge, whereas the Swift has one located above the sink.

Talking of sinks, Lunar’s is a black enamelled one with a recessed drainer and a fold-down glass lid. It is larger than the Swift’s and it looks classier. The Swift has a clip-on drainer to boost work surface space. The Lunar still has more worktop and storage space than the Swift.

They draw equal with good, built-in night lighting, while the Conqueror has an additional mains socket. Both have windows to add natural light and ventilation: it’s four stars to each here.

As their island beds are key features, this is an essential battleground for our contenders.

The Lunar’s roomy fixed island bed benefits from a good mattress, which appeared to have had little use.

The Swift’s transverse double has to be slid towards the nearside wall to ease passage to the end washroom during the day, and extended at bedtime. It, too, looked to have had minimal use.

Both lounges can be used as twin single beds or converted into double beds supported in the middle by slats pulled from the central chest of drawers.

In our opinion, though, it’s the Lunar caravan that takes this round.

Because the Lunar washroom is bissected, it would appear to be at a distinct disadvantage even before we begin comparing it to the Swift’s.

Taken on its own terms, though, the Delta does reasonably well. True, the toilet and basin share a small space that loses floor area to a wheelarch, but it is well-designed with ample storage, a window and a heated towel rail/radiator.

The shower opposite is fully lined, is quite spacious and has a large rooflight to provide light and ventilation.

The Conqueror’s washroom doesn’t automatically capture this round for its size, which keeps the shower and toilet in one continuous space.

It provides ample storage, including a wall-mounted cupboard and another under the basin.

The shower is fully lined and is large enough to accommodate most users but, while the room has a window, there is no rooflight to release steam. Despite this oversight, the Swift overcomes its rival on the strength of the floorplan.

The Lunar’s long and varied roll-call of places to keep personal effects is impressive. Its bumper crop includes plenty of ways to stow kitchen gear, ranks of overhead lockers and shelves extending the length of the interior, wardrobes on either side of the island bed and a swish drinks cabinet.

The Swift caravan also has a drinks cabinet, but it is not as posh, and it shares space with the electricity control unit. The sunroof prevents the use of ceiling space at the front for lockers, and its kitchen storage falls short of the Lunar’s.

The bedroom counters with a corner dresser and twin wardrobes that present more drawer space than the Lunar. The rear washroom beats the Lunar in this department as well.

It’s swings and roundabouts this time, so we have to call it a draw.

Our competitors kept the contest close by being spacious and packed with kit.

Their kitchens, wealth of storage options and overall condition were well-matched. When one pulled ahead – as the Swift did with its smart silver sidewalls and attractive profile – the other excelled in a different area, say as the Lunar’s living area did.

Then it comes down to which layout is better: the Conqueror’s full-width end washroom and island bed that’s not exactly fixed, or the Delta’s split washroom at the foot of a bed that’s ready to use.

We’ve chosen the Lunar Delta TI in this comparison, because it costs £1500 less than the Swift and weighs 174kg less.

If not for those advantages, the Swift would have crossed the finishing line first.

The big Swift seemingly has it all, but will it be enough to overcome the Lunar’s advantage in price and weight?