The Mikado had been in the same ownership for 36 years from new and had double-glazed, tinted acrylic windows Considering that the Mikado had been abandoned for years, it’s looking remarkably good now, thanks to Jim Harlow’s work The Mikado came with a Holt Rogers gas heater and flue 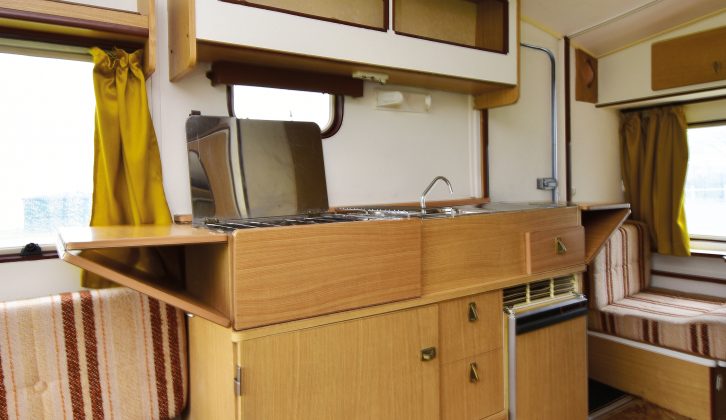 There was a large kitchen in the 1979 Bailey Mikado CT In the days before LEDs, gas lamps were supplemented by 12-volt strip lights From the same range, this five-berth 1979 Bailey Mikado T is towed by a Mk4 Cortina, typical of the time

Jim Harlow has featured in Practical Caravan‘s ‘Me and my caravan‘ series before, with a classic Carlight that he found in a Devon storage yard. Over time, Jim and his wife Ann got it looking tip-top again and brought it along to our Reader Rally in north Devon for others to see. Read more in The Carlight fantastic article.

Jim thought that the Carlight would be his last restoration project, until he came across another vintage caravan in a storage compound, this time a 1979 Bailey Mikado CT.

The three-berth tourer from the Bristol-based manufacturer had been with the same custodians for 36 years from new. The owners hadn’t used it for some years and it looked likely that the Mikado CT would be scrapped. But that wasn’t something that Jim was going to allow to happen.

Jim took the elderly diva back to his workshop where he was able to conduct a more detailed inspection. The sandwich-construction floor wasn’t in the best of health and some damp had entered the Mikado at the front of the caravan. The framework around the nose had rotted and the insulation needed replacing. He also needed some curtains because the originals had been removed.

Jim contacted Bailey of Bristol for information on the Mikado’s original interior and fixtures and fittings.  The manufacturer obliged by providing an old brochure it had in its archive. Although the Mikado needed some extensive work, Jim was determined to save this classic from the scrapheap.

Jim had told me about his latest project and, to be honest, I thought his plan to get the Bailey to the Practical Caravan Reader Rally in early May 2015 seemed a bit ambitious. But Jim pulled it off and arrived at Stowford Farm Meadows in Combe Martin, Devon, with the Mikado in tow. Work was not finished but the tourer was complete enough to show to the rally-goers, who were curious to check out this blast from the past.

The CT model joined Bailey’s Mikado line-up 12 years after the range’s launch in 1967. The tourers quickly became popular with families and couples alike, with models costing just £364 in their first season.

Jim’s caravan came from the first year for this model. The Bailey Mikado CT layout comprised a front single dinette, a centre kitchen opposite the washroom and wardrobe, and the lounge at the rear. It’s a layout that had been popular since 1967, when Lynton and Sprite introduced it to the UK market. It was designed by a legend of the caravan industry, Reg Dean, who passed away last year. The Mikado CT model was in production until 1981, when the floorplan was dropped by Bailey.

The 1979 Mikado was, in fact, a surprisingly well-specified tourer. A Holt Rogers & Co branded gas space heater, complete with flue, warmed the interior, with help from double-glazed acrylic windows fitted as standard, while an Electrolux 120 fridge kept perishables chilled. Bailey also employed an aluminium chassis – quite an innovation in the 1970s!

Jim’s van had played its part in Bailey’s history. A quick scour of internet forums shows models from the Mikado range turning up in Canada. Bailey was exporting caravans in the 1960s, having gained a reputation during the 1950s for producing quality tourers and holiday homes.

The manufacturer is named after Martin Bailey, who founded the firm in 1948, building just a couple of caravans a year. Solid build and pleasing designs led to the Bailey brand’s fortunes increasing, making it an attractive proposition for Winn Industries who bought the firm in 1972/3. By 1976 the firm was in the hands of the current owners, the Howard family, with two brothers, Patrick and Stephen, leading the management buyout for a second generation of the Howard family to continue the business.

In 1972 Bailey used 12-volt electrics in medium-priced tourers, with a Lucas charging system that came with a dry, 12-volt battery and was charged when the van was on tow. Gas lights were still fitted as a standby to the 12-volt strip lamps, while the kitchen’s water supply (cold only) was electrically pumped to the kitchen and washroom. Jim’s 1979 CT model still had these features.

Jim told us that when he took on the caravan, the Mikado still had many original details. Restoring the Bailey is clearly a labour of love, with Jim having spent many months working on it and still with some jobs left to do when we saw it at Stowford Farm Meadows back in May. The Bailey aroused plenty of interest among rally-goers, many of whom were only too keen to recall their caravan-owning past. And it’s gratifying that Bailey, today one of the UK’s biggest caravan manufacturers, has shown an interest, too.

We were left wondering if Jim may just surprise us with another restoration project. Time will tell. And Jim reckons that adding a caravan from the 1960s to his collection would give him a great trio of classics.

Jim was determined to save this classic from the scrapheap Going on a hybrid holiday