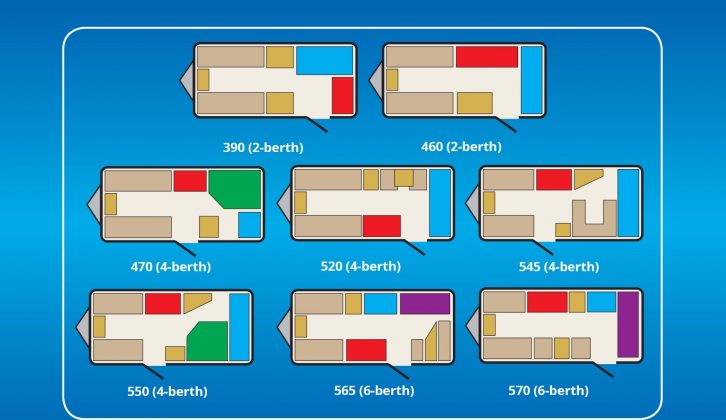 With eight layouts to choose from, the 2011 Sterling Europa line-up offers something for a wide range of caravanners The lounge is large but the front roof lockers are shallow The dual-fuel Truma heater is centrally located in the corridor, between the kitchen and the washroom The Europa’s kitchen is well equipped, but check the Thetford fridge – some had problems that stopped them working The Sterling Europa 565’s layout has a great kids’ zone, but check the condition of the bunk bed mattresses and window blinds As you can see, the good-sized washroom in this van has a separate shower cubicle – this example was in great condition Sterling’s Europa range was one of the brand’s top sellers – offering more modern interiors than competitors, the range proved a hit with younger buyers.

Although no longer built, Europas can be great used buys, with a good spec and layouts, including the 565 seen here.

Europa as a touring brand had been around since 1971, and was then owned by the CI Group.

By 1993, the then current owner, Sprite Leisure, sold out to Swift. Launching the Europas under Sterling, Swift continued to develop the range.

The Europa went through several updated profiles, with 2011 its final appearance, after which the Europa name was dropped, with the Eccles (then the Sport) range replacing it.

The spec included a CD/radio and an AKS hitch, a spare wheel, a Status TV aerial, an oven, a dual-fuel hob, a fridge, a microwave, LED lighting and a shower, plus blown-air heating.

The Europas had a contemporary interior and excellent cabinetwork, not looking at all dated seven years on.

They also had more modern soft furnishings and curtains that hung from poles, not rails.

The 565, as featured here, was a superb family layout designed for six, on a single axle with an MTPLM of less than 1600kg.

With eight models in the line-up for 2011, there is plenty of choice for a good used buy.

The Sterling Europa 565 was introduced for the 2009 season, to cater for those families wanting fixed bunks and a separate children’s area at the rear of the caravan.

The kitchen is on the nearside, with the wardrobe and washroom opposite.

At the rear were side fixed bunk beds and a side dinette, which had a fold-up bunk.

The 2011 year saw the addition of four mains power sockets, while new-style alloys were also part of the spec.

LED lighting for spot lamps and the awning light were also among the minor improvements made that year.

Scanning the used caravans for sale pages online for prices proved that the Europa 565 seems to hang on to its value.

If you want this layout in a more traditional interior, take a look at a Swift Charisma 565, also from 2011, at £10,995 and coming with an identical spec.

Or check out the Bailey Pegasus 546, also sporting the same layout as the Europa 565 and at around £10,695, a few hundred pounds cheaper.

In general, these used caravans are pretty robust and we’re not aware of any major issues with 2011 Sterling Europas.

The spec and weights make them worth considering, while great cabinetwork and a modern interior bode well for a pre-owned buy.

This 565 was in excellent condition and at a fiver less than £11,000, will offer great value for a growing family.