With some of the best cafes and treats in England, go to the famous Bettys Tearoom in Harrogate when you visit Yorkshire Visit the romantic ruins of the 12th century Fountains Abbey, set in a medieval deer park, during your caravan holidays in Yorkshire From the Causeway Caravan Site you can explore Wharfedale in North Yorkshire, taking strolls beside the River Wharfe, joining The Dales Way or popping into Kettlewell’s tasty tearooms 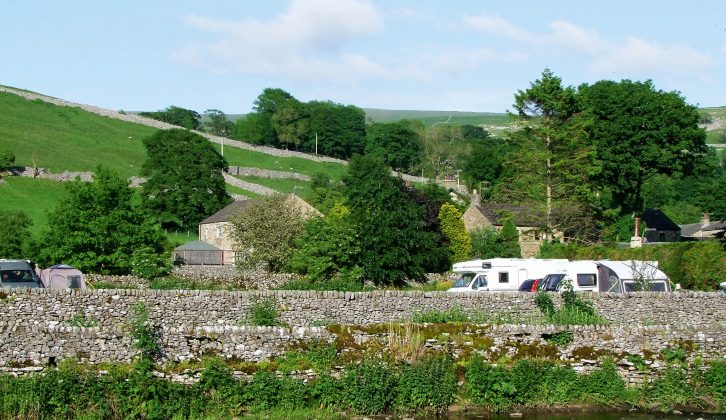 Visit Kettlewell in Upper Wharfedale and you’ll be able to enjoy walks along the River Wharfe, just beyond the Grassington to Buckden road Treat yourself to afternoon tea in one of Yorkshire's many tearooms

There’s nowt quite like a proper brew so treat yourself to afternoon tea in one of Yorkshire’s many tearooms. Bettys tearooms, pretty much a symbol of Yorkshire, in York, Harrogate, Ilkley and Northallerton is synonymous with refined tea-taking. Other greats include Lempicka Café in Beverley, The Spiced Pear at Hepworth and The ArtHouse Café in Penistone. If you really want to get to grips with toasted teacakes and Yorkshire Fat Rascals, why not take Yorkshire’s Tea Trail, for a tour of some of the finest places to eat in Yorkshire.

Spend a day at the races. Yorkshire boasts more top racecourses than any other UK region, offering the very best in British horse racing. Choose from Catterick Racecourse, Redcar, Ripon, Thirsk, Wetherby, York and Beverley. Or you could try Doncaster Racecourse or Pontefract. The Go Racing in Yorkshire Summer Festival throughout July celebrates racing at all venues.

Visit Brontës’ Parsonage Museum in Hawarth to learn more of the Brontë sisters, their lives in Yorkshire and their novels, such as Wuthering Heights and Jane Eyre, whose plots are linked to the West Yorkshire landscape they saw around them.

Climb one (or all) of the Three Peaks in the Yorkshire Dales National Park – Ingleborough, Pen-y-Ghent and Whernside. Or go underground and explore Ingleborough Caves. If that sounds just too strenuous, opt for short walks in the National Park or a leisurely stroll along one of the Dales’ sparkling rivers such as the Swale (along The Swale Way), the River Wharfe or the River Ure.

Make the most of Yorkshire’s coastline, whether your choice is a bracing walk in Spurn Head National Reserve, within calling distance of Lincolnshire, or the windswept Flamborough Head, making sandcastles at Bridlington, enjoying the theatre at Scarborough, exploring Captain Cook in Whitby or exploring the rocky coves and atmospheric harbours of Staithes, Robin Hood’s Bay and Runswick Bay.

The M1 motorway is one of the quickest routes to get to Yorkshire from the south, and it runs as far as Leeds or the A1(M) from the north, which divides the Yorkshire Dales from the North York Moors.

Travelling east-west, the M62 is a useful link from the M6 and the southwest and, further east, also serves the East Riding of Yorkshire. Consideration on the stretch of M62 over the Pennines, and the more northerly A66 cross-Pennines route between the M6 at Penrith and the A1 (Scotch Corner), should be particularly taken during the winter months when, potentially, both roads can be closed at a moment’s notice and when blustery. Also when approaching the East Riding of Yorkshire from the south, using the M18 link road between the M1 and M62 cuts out two sides of a triangle.

The A59 links York and Harrogate with the southernmost parts of the Dales, while the A19 is one of the easiest routes to the North York Moors, although caravans are not allowed on the A170 at Sutton Bank; coming from the south, caravans should approach the Moors via the A64 around Malton and A169 through Pickering.

The A171 from Scarborough to Middlesbrough offers one of the best coastal routes, skirting the edge of the North York Moors; again, given its location on high ground, weather conditions can change unpredictably fast in winter.

You’ll find rural country lanes to be considerably quieter than in other parts of the country, particularly in the more remote areas of countryside. Only a few minor country roads are best avoided while towing a caravan – routes within the centre of the North York Moors National Park and, in the Yorkshire Dales, avoid the route from Thwaite, Swaledale to High Tan Inn, and the road from Kettlewell to Leyburn. Take care on your way to campsites at Malham owing to tourist traffic during the day – consider phoning ahead to check for the best arrival and departure times for caravans to avoid meeting oncoming traffic along very narrow lanes.