The 2015 Suzuki Vitara was revealed at the Paris Motor Show, the fourth generation of this model 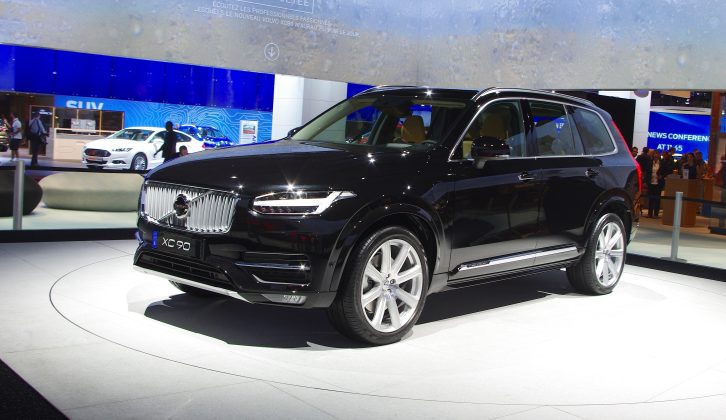 The new, four-cylinder Volvo XC90 might make a cracking tow car if its maker’s claim that it is the world’s most powerful and yet environmentally-friendly SUV is true Caravanners might want to consider the new Ford Mondeo, which will be offered with a choice of three 2.0-litre turbodiesel engines

Out with the 2.2-litre diesel and in with the 1.6 for the next generation Honda CR-V, revealed in prototype form in Paris Sorentos are popular with caravanners and the third generation model looks to build on this – prices will start around £27,000 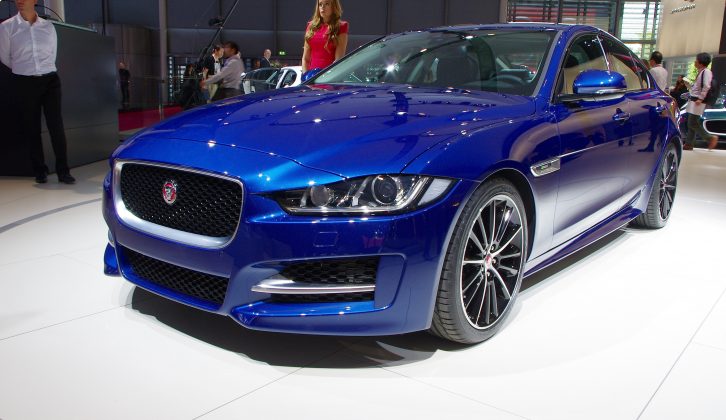 The XF has received high praise as a tow car – how will the new Jaguar XE perform? A sporty, concept version of the Mitsubishi Outlander PHEV was on display in the French capital

For many, the main touring season is behind them for 2014 and it’s time to look forward to your caravan holidays in 2015. And if for you that means the purchase of a new tow car is on the horizon, you’ll be pleased to hear that Practical Caravan’s Test Editor, Mike Le Caplain, has pounded the floors of the 2014 Paris Motor Show and returned with his top 10 new tow cars.

Suzuki chose Paris to reveal that the production version of the iV-4 concept car it exhibited at the Frankfurt Motor Show last year is, as many suspected, the latest, fourth-generation Vitara.

Available with a choice of 1.6-litre petrol and turbodiesel engines, the oil-burner may have the same power (118bhp) as the petrol, but more than double the torque at a whopping 236lb ft, delivered at an impressively low 1750rpm.

Transmission is a manual-only six-speeder (only the petrol model warrants the optional six-speed auto), allied to the ALLGRIP four-mode switchable four-wheel-drive system debuted in the SX4 S-CROSS and a limited-slip differential. The ‘lock’ mode should prove particularly useful on muddy campsites. You can spec your Vitara with two-wheel drive, but this cuts the available kerbweight by 65kg to 1230kg.

I’ve been in this business long enough to have attended the launch of the original Volvo XC90 back in 2002. Back then, the big Volvo’s handling and ride, allied to its multi-adjustable seating, made it the class-leader for some time.

Time and increasingly talented rivals have caught up with it, however, so now, following a succession of nips, tucks and tweaks, there’s an all-new model. And if Volvo’s claim that it is the world’s most powerful and yet environmentally-friendly SUV are to be believed, it’s going to be a cracker.

The latest XC90’s engines – dubbed ‘Drive-E’ – are all new and, perhaps surprisingly for such a large car, all four-cylinder units. Headline-grabbing claims of 400bhp and over 470lb ft of torque are limited to the range-topping T8 Twin Engine hybrid, which uses a supercharged and turbocharged petrol engine in conjunction with an 80bhp electric motor.

We suspect the two diesels will be of rather more interest to caravanners: a 190bhp/294lb ft D4 turbo and a 225bhp/347lb ft D5 twin-turbo. No official word on transmissions as yet, but expect the auto to be the default choice.

Paris was certainly a busy show for Ford, as it marked the world debut of the S-MAX SUV and the European debut of the latest C-MAX, Grand C-MAX and brand new Edge.

The Edge is a large SUV designed to slot into the Ford range just above the Kuga and will offer a choice of 2.0-litre turbodiesel engines, one packing 178bhp/295lb ft, the other 207bhp/332lb ft. The new S-MAX, meanwhile, will be offered with the option of all-wheel-drive for the first time, while the C-MAX comes with a host of design and trim tweaks.

Of even greater interest, however, was our first in-the-metal look at the next-generation Mondeo. First unveiled as a US-spec Fusion at the Detroit Motor Show way back in 2012, internal restructuring to help offset Ford’s colossal losses in Europe has pushed the new car’s launch to the end of this year.

It should be worth the wait, though. Saloon, hatch and estate derivatives are planned, together with – and this is of particular interest to we caravanners – a choice of three 2.0-litre turbodiesel engines, the range-topping twin-turbo mustering a whopping 207bhp and 332lb ft of torque.

Honda coyly plated the two stars of its Paris Motor Show stand as ‘prototypes’, but you can be pretty sure that this is what the modestly revised CR-V and all new HR-V will look like when they go on sale in spring of next year.

There hasn’t been an HR-V in the Honda line-up for nearly 10 years, but now it’s back, and based on the next generation Jazz hatchback. Designed to take on the likes of the Nissan Juke, Peugeot 2008 and Vauxhall Mokka, the HR-V looks set to be the biggest car in the class. Technical specs have yet to be fully confirmed, but Honda is promising a 1.6-litre turbodiesel engine.

Over in camp CR-V, the new look is more a healthy makeover than an all-new model, but the big news concerns the diesel engine. The current 2.2-litre motor has been canned in favour of a new 158bhp/258lb ft 1.6 and the option of a nine (yes NINE!) speed automatic gearbox.

Another major European debut at the Paris Motor show was that of the perennial caravanner’s favourite, the Kia Sorento. Originally launched the same year as the Volvo XC90 (yes, I was on that launch, too), the Sorento surprised everyone by being decent to drive both on- and off-road, and being a consummate tow car. The second-generation model moved the game on after seven years, but now, just five years later, the third-generation model is here.

The good news is that it still represents good value for money, with prices expected to start at around £27,000. It’s as practical as ever, too, with a longer wheelbase opening up greater cabin space and both five- and seven-seater options. Revised steering and suspension, allied to a body that’s wider, longer and lower than previously, should improve handling markedly.

The thirsty petrol V6 was never a big seller in the UK, so the new model will only be offered over here with a 2.2-litre four-cylinder turbodiesel offering in the region of 200bhp/325lb ft of torque.

Infiniti is to Nissan what Lexus is to Toyota – a ‘standalone’ premium brand. And while the line-up’s SUV isn’t exactly new, it’s just undergone a range of revisions inside and out, suggesting it could – finally – be a worthy, if slightly off the wall rival to the likes of the BMW X3.

You’ll need deep pockets – the sole diesel engine is a 3.0-litre V6, and CO2 emissions are way off the class leaders – but a combination of a hefty kerbweight (2175kg) and considerable power/torque (236bhp/405lb ft) makes it a potent tower. We think it looks great, too.

Okay, so this is the biggie as far as caravanners are concerned. The standard Discovery has been a towing staple pretty much from its 1989 launch, and this, the new Sport, looks set to bring Landie ownership to a broader audience than ever.

Like the Range Rover Sport before it, the Discovery Sport takes the plus points of the Discovery, but in a more manageable and better handling package. Styling has more than a hint of Evoque about it, but it’s a much harder core car, with near-Discovery levels of off-road ability.

At launch, engines will comprise a range of four-cylinder petrol and diesel derivatives, with a high efficiency eD4 diesel arriving later in the year packing a remarkably low 119 g/km of C02. Both diesels weigh 1817kg, with the SD4 packing 187bhp and 310lb ft of torque and the TD4 148bhp and 280lb ft.

Transmission options comprise six-speed manual and nine-speed auto, while buyers can choose between two- and four-wheel-drive.

Anyone who still shudders at the memory of the late (and, for many, not terribly lamented) Mondeo-based Jaguar X-Type should sit up and take notice of Jaguar’s latest BMW 3 Series rival, the XE. As stylish as the X-Type was challenging, the XE design has elements of the bigger XF from the front and more than a hint of F-Type coupé in profile.

There’s a choice of three engines and two transmissions underneath the pretty body, but caravanners will likely be most interested in the pair of new ‘Ingenium’ 2.0-litre diesels, one rated at 161bhp/280lb ft, the other 178bhp/317lb ft. Of even greater interest is the four-wheel-drive XE promised for 2016, which is set to use a version of Land Rover’s Terrain Response system.

No news on an estate version as yet, but since the XE will do battle with the likes of the Audi A4, Mercedes-Benz C-Class and BMW 3 Series – all of which offer estate derivatives – and Jaguar offers an estate version of the XF, we wouldn’t rule it out.

The previous-generation Volkswagen Passat (dubbed ‘B7’, though it was in essence a heavy reworking of the 2005-on B6) was launched at the Paris Motor Show in 2010, so it seems apt that the all-new saloon and estate should mark their debut there four years on. And it appears to have been designed specifically with caravanners in mind.

For one thing, launch models will only be available with a choice of turbodiesel engines. The 118bhp 1.6 sounds worthy enough, but we suspect most will gravitate naturally towards the 148bhp or 187bhp iterations, with deeper pockets likely to favour the twin-turbo 237bhp all-wheel-drive model.

And for another, Volkswagen has introduced an optional Trailer Assist system, which is claimed to take over the sometimes thorny issue of reversing a caravan.

Expect a super-efficient Bluemotion diesel later in 2015, together with a GTE plug-in petrol/electric hybrid.

Another Paris Motor Show debutant, back in 2012, Mitsubishi’s ground-breaking Outlander PHEV petrol/electric hybrid SUV was joined at this year’s show by a glamorous prototype dubbed ‘Concept-S’. It uses the same clever drivetrain as the standard PHEV, but a bold styling overhaul inside and out hints at a sportier, more luxurious version that could go into production in the future as a direct rival for the BMW X3 or X5. A more striking external look is complemented by black wood and deep red leather inside, more food for thought when deciding what tow car to buy next.