This nine-inch touchscreen dominates the dash – we’re pleased to report that it’s not just good-looking, it works well, too! You have 505 litres with five seats in place, 1432 litres the maximum capacity 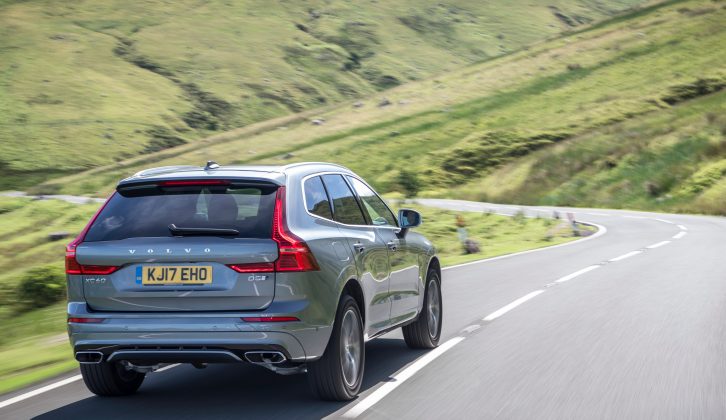 In an industry in which brief product life cycles have become typical, Volvo’s mid-sized SUV has lasted for nearly a decade.

Even at the end of its life it has continued to sell strongly. And it’s a car with impressive towing credentials, having won the heavyweight class at the Tow Car Awards in 2009.

It looks like a leaner, more athletic XC90. In fact, that’s more or less what it is.

It’s built on a shrunken version of the same platform and uses many of the same engines. And that’s not a bad starting point when the XC90 tows so well.

There are four engine variants, all with four-wheel drive and an eight-speed automatic gearbox. We’ve had the chance to drive two of them, both 2.0-litre, four-cylinder diesels.

Despite all the anti-diesel headlines doing the rounds, the best-seller is expected to be the D4 – with 190PS (187bhp) and 295lb ft of torque, it pulls strongly, with enough punch for decisive overtaking in solo driving.

It’s efficient, too, if the official figures can be believed, returning 55.4mpg and emitting 133g/km of carbon dioxide (CO2) in cars with 18-inch alloys. With bigger wheels it returns 54.3mpg and emits 136g/km.

The new Volvo XC60 is lighter than the old model, but it’s no featherweight. The D4 AWD has a kerbweight of 1877kg (including 75kg for the driver not included in the manufacturer’s published kerbweights).

While just over half of buyers are predicted to pick the D4, a quarter are likely to choose the D5, which costs £3500 more than the equivalent D4.

Strong though the entry-level engine is, the D5’s extra poke is immediately apparent. With 235PS (232bhp) and 354lb ft of torque, it surges forward in solo driving and should comfortably handle any suitably matched caravan.

Volvo says the D5 is quicker than the equivalent 3.0-litre, six-cylinder diesels fitted to some of its rivals. That may be so, but the D5 can’t match the best six-cylinder engines for refinement.

It can sound strained at high revs, and when driven more gently the engine note is bland compared with the smooth and cultured sound of an Audi or Jaguar six-cylinder diesel.

However, the D5 is very economical for such a powerful engine, achieving 51.4mpg on the combined cycle and emitting 144g/km of CO2.

And it’s a little heavier than the D4, with a kerbweight including the driver of 1921kg, which gives an 85% match figure of 1633kg.

It’s not the heaviest or the quickest XC60, though. Both titles belong to the T8 plug-in hybrid.

Although we haven’t driven this version of the XC60, we have tested this petrol-electric powertrain in the XC90. It proved an extremely quick and able tow car. The XC60 T8 has a 2161kg kerbweight, an 1837kg 85% match figure, and a 2100kg legal towing limit.

The fourth engine variant in the new Volvo XC60 range is the T5 petrol. With 254PS (251bhp) it promises to be quick, but it’s likely to make a very thirsty tow car.

A question of suspension

As well as a choice of engines, buyers can choose between different suspension set-ups. The standard suspension is rather firm, but feels well tied down at speed.

R-Design models come with sports suspension, which is stiffer than standard and rather unyielding at low speeds, but comes into its own on a twisting country road.

It makes the XC60 agile for a car of this size and weight. However, for our taste it’s a little too uncompromising for our pock-marked roads. And let’s be clear, even with the sports suspension the XC60 isn’t as engaging to drive as a Jaguar F-Pace or a Porsche Macan.

Unfortunately, for XC60 buyers looking for a comfortable ride and nimble handling, the best suspension is the most expensive. The Active Four-C Chassis has adaptive dampers and air springs, and costs £1500 (although it’s standard on R-Design Pro and Inscription Pro cars).

With the system set to ‘comfort’ it’s more forgiving of rough surfaces than either the standard or sports suspension. Switching to ‘dynamic’ lowers the car closer to the road and keeps body roll to a minimum, without making the ride too harsh.

It’s an option we’d definitely choose, and not only for the better ride and handling balance it achieves. For driving off road the ride height can be raised, which could come in handy on a bumpy farm campsite.

The Active Four-C Chassis option also means the car can be lowered to make loading up easier.

That’s useful given that the load floor is relatively high from the ground, as you’d expect of a 4×4. There’s a wide opening to the boot, and the floor is flush with the tailgate.

Volvo quotes a boot capacity of 505 litres – usefully big, although not as much room for bags as you’d find in an Audi Q5 or a Jaguar F-Pace.

Folding the back seats down leaves a very slight slope to the floor, but increases luggage space to 1432 litres. The T8 variant has a slightly smaller boot, with a capacity of 468/1395 litres.

Passengers have plenty of space, and notably more than in the old car. There’s more than enough head and legroom in the back for tall adults to be comfortable, and air vents in the door pillars to keep them at a comfortable temperature.

In the front of the car, there’s a strong family resemblance to the larger XC90.

The dashboard is dominated by the Sensus infotainment system, with its nine-inch touchscreen. It works well and looks as sharp as any upmarket tablet computer.

It also makes for a crisp and uncluttered look to the front of the cabin. The overall standard of fit and finish is high, although for our money the Audi Q5 has a slight edge.

As you’d expect of a Volvo, safety standards are high and there’s a whole raft of driver aids.

All cars have autonomous emergency braking, oncoming lane mitigation (which steers the car if the driver drifts towards a vehicle coming in the other direction) as well as driver, driver’s knee, passenger, side and curtain airbags.

The Intellisafe Pro pack (£1500) adds several driver aids, including Pilot Assist which can steer the car to keep it in lane at speeds of up to 80mph.

How does the new XC60 measure up against these rivals? The Volvo is certainly a very capable car, with strong performance, a high standard of finish and a practical cabin.

But on standard or sports suspension the ride is very firm. The optional air suspension makes the car more comfortable, and is money well spent.