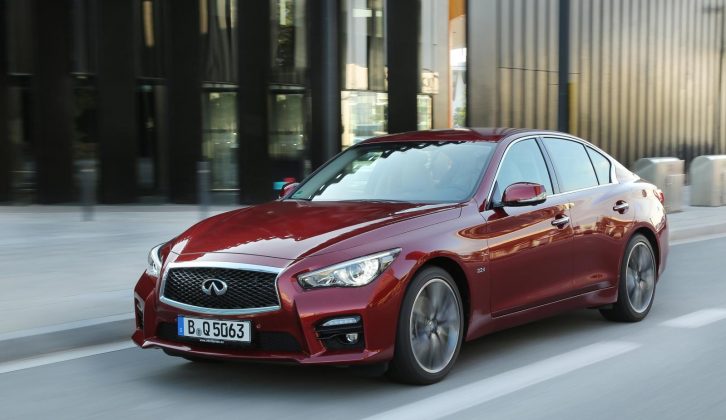 Cabin space is decent and the Infiniti Q50 has a 500-litre boot, too The Infiniti Q50 saloon is one of the Japanese company’s newest models, charged with the task of bringing Nissan’s upmarket brand to a wider audience. A rival for the Audi A4, BMW 3 Series and Mercedes-Benz C-Class, it faces some serious competition.

So far, the Q50 has struggled to find a niche for itself when the established executive saloons are so good. Speak to Infiniti’s PR people, and they’ll tell you that exclusivity is key to the brand’s DNA. But with just 591 cars sold in the UK this year up to the end of September, you could argue Infiniti is taking exclusivity a bit too far.

With new models on the horizon and plans to more than double the size of the dealer network by 2018, Infiniti doesn’t intend to remain such a small player in the UK market for long, and the Q50 line-up has now been bolstered by the arrival of a petrol option alongside the diesel and hybrid models.

Normally I’d steer clear of petrol power in favour of diesel for towing duties, but the new 2.0t engine has enough muscle to make a decent choice for towing. With 258lb ft of torque, the petrol is only 37lb ft shy of the 2.2-litre diesel’s output. With an official combined figure of 44.8mpg when matched to a seven-speed automatic gearbox, fuel economy is some way off the diesel auto’s 58.9mpg, but it’s certainly not thirsty if the official figures are to be believed.

Having driven both petrol and diesel (although unfortunately not the hybrid), I definitely prefer the petrol. It’s much quieter than the diesel, which is simply too gruff. The 2.0t is considerably smoother and more powerful at the top-end of the rev range.

With plenty of power and torque, towing shouldn’t be a problem. The unusually high 1678kg kerbweight gives an 85% match figure of 1426kg. The legal towing limit is 1500kg.

For company car drivers the diesel is clearly the more tax-efficient choice because of its lower carbon dioxide emissions, and if you cover a lot of miles there’s the fuel saving to consider. It’s heavier than the petrol (from 1744kg for the auto) and the legal towing limit is identical at 1500kg.

However, it’s hard not to be disappointed by the diesel. It’s not just the noise under acceleration, there are other signs of poor refinement. At tickover the engine sends vibrations through the driver’s seat and the steering wheel, which just isn’t acceptable in a £30,000 car. There’s a stop-start system to save emissions in traffic, but every time the engine restarts it does so with a shudder.

It’s a shame, because in many ways the Q50 makes an interesting alternative to the more obvious compact executive saloons. Anyone who enjoys gadgets and technology will be intrigued by the Q50. Direct Adaptive Steering is a good example. This ‘steer-by-wire’ system allows Infiniti to offer the driver a choice of steering weight and responsiveness. In the sharpest mode the steering is direct to the point of nervousness, which takes some getting used to. The least responsive setting feels very vague, so the normal mode is best in regular driving. Whichever setting is chosen, the steering lacks feel, but then Infiniti would argue that eliminating any kickback through the wheel over bumps is a price worth paying.

The steer-by-wire system also allows for the very clever but rather disconcerting Active Lane Control. This system will gently steer the car back towards the centre of the lane if the car begins to drift towards a white line and the driver isn’t indicating. What’s really hard to get your head around is that it does this without the steering wheel moving. Spooky stuff, and you can turn it off if you’d rather the car didn’t try to drive itself for you.

Both the petrol and diesel cars we drove rode firmly, but stopped short of being harsh. At speed both cars were unerringly stable, which should bode well for stress-free caravan towing.

Inside, the Infiniti offers reasonable space compared with the BMW 3 Series and Audi A4, and the 500-litre boot is a healthy size. However, if you can live without an upmarket badge there’s no shortage of saloons and hatchbacks from mainstream brands which offer more space.

Prices start from £27,950 for the entry-level diesel with a manual ‘box. The auto costs another £1550. Oddly, the petrol isn’t available in the most basic specification and there’s no manual version, so it’s priced from £31,755.

There are better compact executive saloons than the Infiniti (the 3-Series is my pick), but if you really want to avoid the obvious choices and appreciate the Q50’s technology, it’s an intriguing car.