Kerbweights across the Astra range are 1248 to 1364kg, which might hurt its prospects if you’re considering what tow car potential it has for bigger tourers 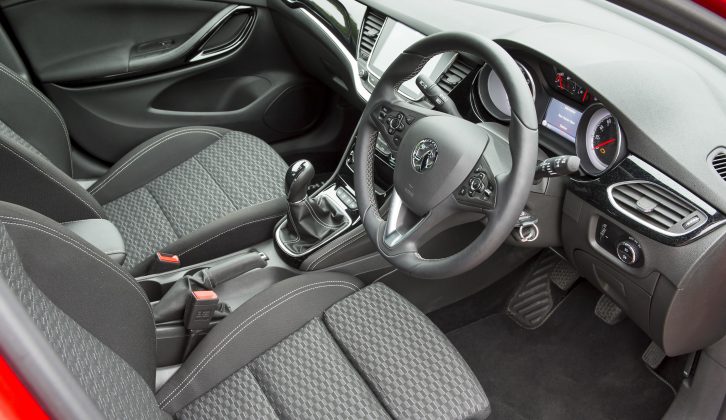 The new Vauxhall Astra’s cabin is smart and spacious, although we found the conventional handbrake rather stiff 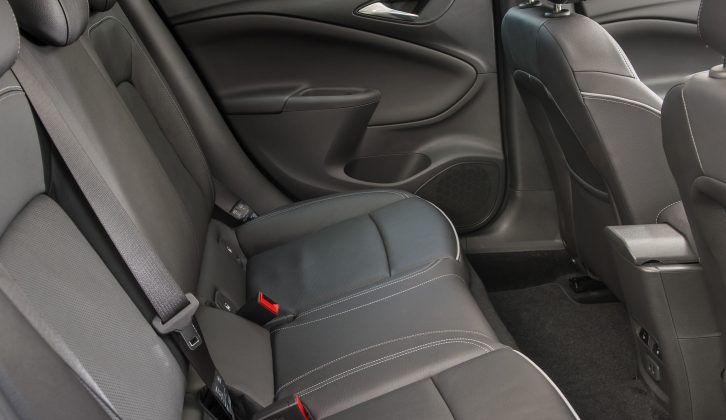 Rear seat space is good, but the window line is quite high The smartly-finished gearlever sits nicely in your hand and has a smooth action, so shouldn’t become tiresome after a long drive when on tour It’s a fine drive, but the jury’s out on what tow car ability the seventh-gen Vauxhall Astra has

The Vauxhall Astra has long been a model synonymous with dependable, affordable family transport and with the launch of this the seventh-generation model, which goes on sale this month, there’s more of the same.

But not just that. The Astra is a key model in Vauxhall’s portfolio and the maker is keen to raise its profile, with one eye on the tech-heavy, prestige cars a segment above.

However, let’s start with the basics. From launch there are seven engines in the range, four petrols and three diesels, with a 99bhp, 1.4-litre petrol completing the line up later this year. For now, petrol outputs go from 104 to 197bhp, with diesels from 108 to 158bhp, and there are five- or six-speed manual and six-speed automatic gearbox options, depending on the engine chosen.

One of the headlines from the Astra’s launch is that it’s smaller on the outside than its predecessor (now 4370mm long), while simultaneously offering greater room inside. Extra cabin space on tour is always very welcome, but the fact the new Astra is also up to 200kg lighter than before (depending on the model and trim), may make it a less useful buy when outfit matching.

Kerbweights across the range (including 75kg for the driver) go from 1248kg (for the yet-to-be-launched 99bhp 1.4) to 1364kg (134bhp 1.6-litre diesel auto). If you stick to the 85% rule recommended by the UK’s two largest caravanning clubs, that means you can tow caravans weighing between 1060kg and 1159kg. Clearly, the Astra will only suit if you’ve a lightweight van.

Still, if the weights work for you, there’s a lot to like about the new Astra. Driving the 148bhp, 1.4-litre turbo petrol will likely be the more rewarding experience. Pleasantly quiet, it’s also an engine that encourages you to have fun and explore the higher reaches of the rev range. Delve into the 181lb ft torque (which peaks at a surprisingly flexible 2000-4000rpm plateau) and it really is an eager little thing, easy to keep on the boil and never feeling lacking on a good range of road types during our test.

This is in no small part due to the slick-shifting six-speed manual gearbox, which helps you to make the most of what’s on offer – as it does when mated to the 134bhp diesel.

Sandwiched between the 108bhp and 158bhp variants of the new 1598cc ‘Whisper Diesel’, this mid-range model is surely one of the choice models for caravanners, weighing in at 1350kg in manual form. That it’s priced from £18,180, a £1320 saving on the auto and a not-too-painful £1185 more than the entry-level diesel, underlines its appeal.

And the 134bhp diesel does a pretty decent job of living up to its ‘Whisper Diesel’ moniker, once warmed through. While not over-endowed with welly and with a very slender peak torque band (236lb ft is delivered between a blink-and-you’ll-miss-it 2000-2250rpm), work the gearbox and there’s sufficient grunt in town, on the motorway or on a back road. We suspect, however, that its performance would be significantly blunted by having a caravan hitched to the back. This is accompanied by an official combined economy figure of 72.4mpg; we achieved an encouraging 46mpg after an enthusiastic, cross-country drive. For context, this compares with an official combined fuel economy figure of 51.4mpg for the 1.4 148bhp petrol, which also returned 46mpg on a B-road blast.

Whichever variant you plump for, you’ll find that the latest car to wear the Astra badge is a very likeable drive. While the steering is light around town, making the car a cinch to park and manoeuvre, it is never vague, turning in cleanly and directly. The six-speed manual ’box is an easy companion, and the brakes are pleasingly linear.

One item to note in the cabin is the parking brake. On test, we found the conventional parking brake very stiff and heavy to release and engage. In contrast, in cars fitted with an electronic parking brake (standard from Elite trim up or a £225 option) it engaged at the touch of a button and seamlessly released when pulling away.

Speaking of the cabin, Vauxhall’s headline-grabbing statement about the new Astra being larger inside than before certainly seems to hold up. Space up front is ample and the fact that a 6ft 3in passenger can sit behind a 6ft 3in driver means most people can be accommodated, most of the time.

There’s good adjustability in the driver’s seat and the steering wheel has both rake and reach adjustment. The seats are very comfortable, too, and despite the cabin being predominantly black, the mixture of textures and the use of silver highlighting mean that it never feels dingy. However, despite all that room, the high window line might mean that younger and/or smaller rear-seat passengers may struggle to see out.

Boot space is decent, too, the Astra offering 370 litres and an  828mm-long boot floor with the rear seats in place, increasing to 1210 litres and 1575mm with the rear bench folded and the space filled to the roof; and those rear seats are very easy to fold. The aperture is usefully wide, though there is a rather high load lip.

Quite apart from the fact that the Astra is an agreeable drive, the profusion of tech available is impressive for a mid-market model from a mainstream brand; much of it will interest caravanners for long drives on tour, too. OnStar, for example, turns the Astra into a 4G LTE mobile Wi-Fi hotspot, to which up to seven devices can be connected simultaneously, as well as bringing a host of reassuring safety and comfort features. It’s standard from SRi spec and above.

Also of note is the smartphone integration: Apple CarPlay comes as standard on all models, as part of the R4.0 IntelliLink infotainment system. You simply plug in your iPhone using its USB charging cable, and key apps including Phone, Maps, Messages, Music, Podcasts and Audiobooks are accessible, either using the touchscreen display, by voice via Siri or through the iPhone itself, allowing you to seamlessly tailor your in-car entertainment and keep in touch with the outside world. It’s the simplicity and ease of use that impresses the most, and the fact that using OnStar means that the phone can be connected to the car’s Wi-Fi hotspot. Integration for Android phones is expected to come on-stream early next year.

The range starts with the entry-level Design, followed by Tech Line, Energy, SRi, SRi Nav, Elite and Elite Nav, with prices beginning at £15,295 OTR for the 1.4-litre, 99bhp petrol Design. The diesel line-up kicks off from £16,995 OTR for the 108bhp 1.6. And if you’re looking to fit a towbar from the factory, it’s £525 including VAT for a detachable item – and there’s a trailer stability programme integrated into the ESP system.

There’s no doubt that the seventh-gen Astra is neatly-packaged and enjoyable to drive. Whether it’s heavy enough, or has sufficient grunt, to cut it as a tow car remains to be seen. However, with both its Vauxhall Insignia Country Tourer and Sports Tourer stablemates proving to be strong and dependable tow cars when we had them on long-term test here at Practical Caravan, with such good breeding the new Astra might yet have another ace up its sleeve.