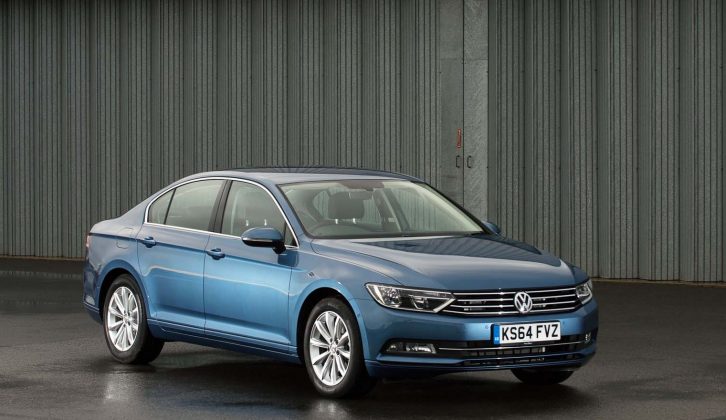 Now in its eighth generation, the latest Volkswagen Passat is handsome and, says our expert, very impressive Inside the new Passat, there’s plenty of space for passengers As well as the saloon, a new VW Passat estate is available The new VW Passat starts from £22,215 – read more in the Practical Caravan review If you struggle reversing your van on your caravan holidays, Volkswagen’s new Trailer Assist (£465) might be the answer to your prayers Select the angle and direction of the turn you wish to make, then reverse and the car does the rest

If you prefer a tow car to have a few rough edges, some quirks and a bit of character, you won’t like the new Volkswagen Passat. The eighth generation of Volkswagen’s family car is so efficient and able it’s almost annoying.

With its sharply creased bodywork the new car looks less anonymous than the previous model, but it’s understated and handsome rather than drop-dead gorgeous. In its styling as in everything else, the Passat sticks to the expected script. It’s thoroughly competent, just like the old car, only that little bit better.

The previous VW Passat was available with a number of high-tech features, and the list of clever gadgetry has now grown. The highlight for caravanners is the Trailer Assist system, a £465 option. This system steers the car for you when reversing. Select the angle and direction of the turn (the door mirror adjuster doubles as a ‘joystick’ control for the Trailer Assist system), reverse and let the car do the rest.

After an initial steering input the system gauges the wheelbase of the trailer or caravan by observing the angle of the hitch and using some ingenious image processing algorithms. In other words, there’s no need to manually input the size or type of trailer for the system to function – it works it all out for itself.

I found Trailer Assist steered accurately back onto the pitch which Volkswagen had prepared for its demonstration. However, the chief limitation of the system is that you need to initiate the turn at the right moment for Trailer Assist to guide you into place precisely, so it still requires some skill and judgement from the driver. If you turn too early or too late you can adjust the steering using the mirror adjuster, but then the steering has ceased to be fully automated.

Unfortunately, all the towing I’ve been able to do with the VW Passat so far has been limited to reversing around a hotel car park, so the opportunity to assess what tow car potential it has was limited, but there’s no reason to believe the new car won’t be at least as good a tug as the previous model.

Kerbweights are down by around 85kg, which isn’t ideal if you take a belts and braces approach to outfit matching, but the firmly controlled suspension of the cars I drove suggests the new Passat should make a stable tow car.

A 120PS (118bhp) 1.6-litre diesel is the entry point to the range (there are no petrol versions as VW doesn’t believe there’s enough demand), and returns an impressive 70.6mpg on the combined cycle. It performed well enough in solo driving, but the more powerful models look like a better bet for regular towing.

The ‘S’ spec 1.6 I drove was equipped with 16-inch alloys and unfashionably high-profile tyres. They may not look the part, but they helped this version ride more smoothly at low speeds than more expensive Passats with their larger alloys and lower profile rubber. There’s less road noise, too, so don’t think that by choosing the cheapest model you’re buying a lesser car in all respects.

The kerbweight for the 1.6 saloon with a manual gearbox is 1444kg, with a 1500kg legal towing limit. The maximum towball download is 90kg for this and all other versions.

The best-seller is expected to be the 150PS (148bhp) 2.0-litre diesel. With 251lb ft of torque, this model has enough poke to cope with any suitable match. That said, in sixth gear the engine was only turning over 1600rpm at 60mph, so motorway inclines could need a down-change to fifth with a caravan in tow.

Kerbweights for cars fitted with this engine start from 1475kg for the saloon with a manual gearbox, giving an 85% match figure of 1254kg. The legal towing limit is 2000kg.

Acceleration is noticeably more urgent if you choose the 190PS (187bhp) 2.0-litre diesel version of the VW Passat. The top-end punch improves, but it’s the higher torque figure of 295lb ft which will really count when towing. This version is also a few kilos heavier, with a 1549kg kerbweight for the saloon with a manual gearbox.

However, the 190PS version pales next to the 240PS (237bhp) 2.0-litre BiTDI 4Motion. With four-wheel drive and the smooth-shifting Direct Shift Gearbox, this car is effortlessly quick and significantly heavier than other models (kerbweights start from 1721kg). There’s so much pulling power (369lb ft) that even with four-wheel drive it’s possible to briefly unstick the tyres if you’re too brutal with the throttle on damp roads. Drive smoothly, though, and this is a refined express which can stand comparison with more expensive, prestige-badged rivals.

Where the Passat really scores over upmarket alternatives such as the BMW 3 Series and Mercedes-Benz C-Class is in the cabin and boot. There’s more space for passengers, with plenty of head and legroom front and rear. It’s the luggage room that impresses most, though. The saloon offers 586 litres for bags, while the estate has a massive 650 litres. That expands to 1780 litres with the back seats folded – a quick and easy job thanks to levers either side of the tailgate.

There’s been a price rise compared with the old model, but not a huge one. The range now starts from £22,215, climbing to £35,505 for the BiTDI Estate in range-topping R-Line trim.

VW tells me it has three Passats with towballs on its press fleet, so I’ll be booking one in for a full tow test soon. If you can’t wait that long, the first few cars off the boat will be in dealers this month and will doubtless make marvellous companions on your caravan holidays.

It is so efficient and able it's almost annoying The Volkswagen Passat has had a facelift