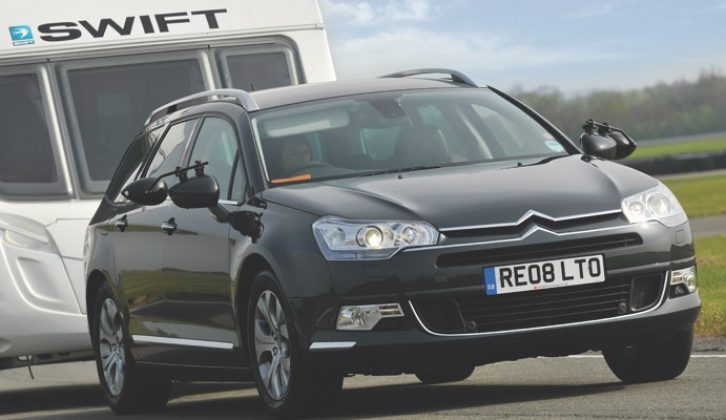 The C5’s adjustable suspension makes hitching up easier and keeps the car stable when towing, even during violent lane-change manoeuvres Options include electrically adjustable and massaging front seats, sat nav, Hydractive 3 suspension and parking sensors, so it’s well worth taking the time to hunt down as well-specified a model as you can

When this generation of C5 was launched, Citroën was keen to flaunt how it had managed to make the car… German. Yup, that most chic of French brands bade farewell to Gallic flair and focused on Germanic quality and efficiency.

The car’s appearance had a certain Teutonic robustness, while build quality showed a significant improvement over that of older Citroëns.

Citroën didn’t abandon all of its historical principles with the C5, so instead of focusing on the usual German attributes of ‘sporty’ driving experience and attendant ‘compromised’ ride quality, the French brand made the car comfortable and quiet.

If you have a long way to go, as most tow car drivers do, and want peace and comfort, take a look at the C5 Tourer.

In the mid-2000s, Citroën was seen as a bit of an also-ran. Models such as the C5 were not just off the pace, they were dull. Citroën, for so long the standard-bearer for unusual, quirky design, had lost its way.

It looked to its German rivals for inspiration, and the second-generation C5 was born, in both four-door and estate forms.

Effortless oddness was out, better build quality was in.

A load of standard equipment was also present and correct, with all models fitted with air-con, alloy wheels, adaptive front lights, cruise control and a speed-limiter.

Options included electrically adjustable and massaging front seats, sat nav and Hydractive 3 suspension, as well as parking sensors, so look out for as well-specified a car as you can.

Weirdness wasn’t completely abandoned, however, with Citroën fitting a steering wheel on which only the rim moved – the centre stayed still.

Initially, there were two petrol engines and four diesels available. The petrol range comprised a 127bhp 1.8-litre four-cylinder engine and a 143bhp 2.0 four-cylinder.

These are strong, smooth units that suit the car well when driven solo, but it’s a different story with a trailer hitched. They’ll undeniably pull a heavy trailer, but they’ll also need plenty of top-ups.

In 2010, this engine was replaced by the 158bhp 2.0-litre engine, which complied with stricter emissions regulations. This is strong and economical, and worth looking out for.

Two suspension set-ups were available – a conventional passive and an adjustable hydro pneumatic. It’s actually the old-school springs and shock absorbers that give the C5 Tourer the better ride.

Those looking for a tow car will surely appreciate the fact that the adjustable suspension can be raised or lowered to aid with hitching up.

This adjustable suspension also helps when towing, keeping the car stable even in violent lane-change manoeuvres.

Inside, five adults will have ample head- and legroom, and the boot is a good size, albeit not as large as the Ford Mondeo or Mazda 6 – blame the sloping tailgate for that. Fold the seats for a big area that’s easy to load.

From 2010, all C5s were fitted with Citroën’s eTouch emergency and assistance system, while various trim and tech upgrades happened throughout the car’s life.

The C5 has been subject to 12 recalls. These included the possibility of a leak from a defective fuel pump, plus windscreen trim that could become loose and in extreme circumstances, detach itself.

The C5 was then recalled for defective tailgate struts that could fail to keep the door open. More worryingly, the handbrake caused a recall, and so did the vacuum pump in the braking system.

Next was a duff windscreen motor, then the engine could stall after an emergency stop owing to the oil levels being incorrectly measured. Once more, the fuel system was found to be at fault, with the possibility of a fuel rail leak causing another recall. Inside, airbags could deploy incorrectly – another recall. The last two concerned a faulty starter motor wire, and defective engine cooling electronics.

Other issues seem largely random, such as tyre pressure monitoring sensor failures or power steering problems. That’s why you really want to make sure that the car has a solid history file; it should tell you if all of the recall work has been done. Then, because the C5 is quite a complex machine, take along someone who knows one end of a socket from the other. Or get a professional inspection carried out.

The C5 was much better made than other Citroëns of the period, and the age of the earliest cars means condition is key, rather than mileage.

Given that you can purchase this generation of C5 for less than four figures (if you’re brave), there’s a good chance of finding a cracking example for a bargain-basement price.

Even if you shell out a few thousand more, you’ll be getting a supremely quiet, comfortable car that eats up the motorways, towing or solo. It’s spacious enough for family holidays, and you’ll be able to drive past many a fuel station on the way.

As mentioned, you can pick up a C5 Tourer for less than a grand. However, you need to bear in mind that the cheapest cars will have spent the bulk of their lives on the move, and not always in the most sympathetic hands. These are the cars that will require the closest inspection.

Even the most expensive cars (bar a couple of exceptionally hopeful dealers) are available for around £10,000, so there’s scope for a late-year high-spec model that’s been well cared for.

This is the perfect C5, an ideal blend of reasonable price, comfort, standard equipment and muscle. It will handle a heavy trailer, and keep you entertained.

This is an acceptable version if all you ever do is potter around town, with the occasional foray on to faster roads. But the engine will struggle with a trailer.

If you have a long way to go, as most tow car drivers do, and want peace and comfort, take a look at the C5 Tourer