The Castleton has a spacious interior with plenty of storage options 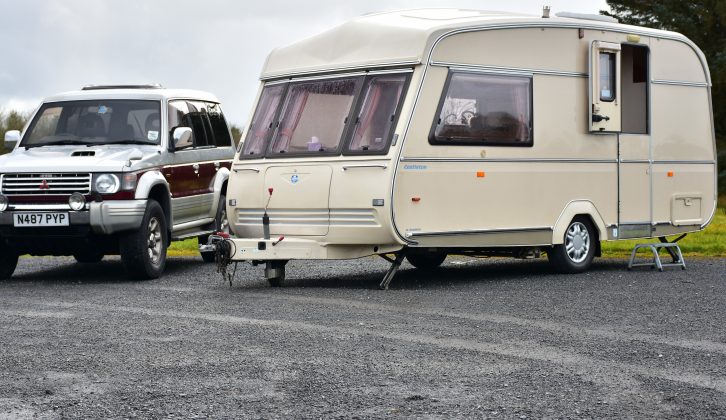 The Castleton badge has survived for 47 years, and counting The Castleton caravan factory was in Sherborne No Castleton tourer was complete without a generous drinks cabinet A new fire extinguisher is a ‘must’ in any caravan There’s an old-fashioned caravan toilet in the Castleton Graham and June Perry were among the founders of the Period and Classic Caravan Club back in the early 1980s. Like so many people we have featured in our ‘me and my caravan‘ series, this group of enthusiasts is dedicated to preserving and restoring the tourers of yesteryear and, as the club grew, Graham would go on to own several great classic caravans.

Among these was a 1930s Winchester that was found in a rather poor state, restored over several years and matched to a classic tow car. Graham and his brother Alan soon became regulars on the local classic car and caravan scene. Although originally from Birmingham, Graham has since moved to South West Wales and we caught up with him at the Gogerddan Arms Caravan Site as he took a break from running his clay-pigeon shooting business.

Back to the future

Although he still owns the Winchester, Graham decided that it was time he and June had a more modern tourer for general use. True to form, however, it couldn’t be anything run-of-the-mill, and Graham was keen to find something that would serve as a more modern interpretation of his Winchester.

That dream tourer turned out to be a Castleton HL Roadster, one of the last models built at the Tinneys Lane factory in 1995.

This clubman tourer had been one of the top luxury models in the 1960s, ’70s and ’80s and it continues to have a strong following today.

Castleton was established by Leslie Bennett, a grocery store owner in Sherborne, Dorset. Bennett had built a handful of static caravans and sold them, but Castleton Clubman Tourers wasn’t formed until 1958, when Bennett designed his first tourer and called it the Roadster. By the early 1960s the Castleton name had become synonymous with quality touring caravans, and in 1969 Les Bennett’s son Len took over the business, which by that time was producing just a few hundred tourers a year from the small factory.

Distinctive in design, the Castleton tourer was always seen as being a little old-fashioned, but this was also part of its charm: the factory had a team of skilled tradesmen using traditional building techniques. However, as the market for handbuilt luxury tourers began to dwindle, Castleton also lost sales. In an effort to appeal to younger buyers, a new model – the Genesis – was launched using bonded construction and boasting lighter weights, but in mid-1995 Castleton was wound up. The factory was bulldozed and houses were built, with one road being named Castleton after the once-illustrious firm.

Graham bought his 1995 example a few years ago and uses it to visit game fairs, where he has a stand for his business. “We wanted a place to be able to relax after a long day on our stand – and to use for holidays, too,” says Graham. “The Castleton was always a van that I aspired to – I wanted a new one in the 1980s, but it was too expensive and I couldn’t do a deal at the NEC Caravan & Boat Show.” Back then, Graham and June ran a historic caravanning display at the show, exhibiting items from touring days gone by.

The Perrys’ HL Roadster was a quality tourer, and a high-spec model for the time. An alarm, oven, fridge, flyscreens and blinds, a cassette toilet, mains lighting and a CD/radio were all fitted, and from 1994 the model was given a GRP front panel.

Conventional coachbuilt methods were employed, and in a Caravan Club survey Castleton vans scored a 92% rating among owners for their outstanding quality. They were distinctive in profile, and carefully crafted inside with their oak-veneered furniture and cabinet work – highly impressive in a world of mass-produced tourers.

The Perrys’ Castleton tows well behind their Mitsubishi Pajero – built in the same year as the tourer – and Graham has fitted a mover to make it easier to place on a pitch. Although once seen as a traditional brand, today the HL Roadster still looks surprisingly modern for its 21 years, and it’s easy to see why the Castleton name is picking up momentum on the classic-            caravanning scene. Classic Comanche turns up in Carnforth Build your own classic VW T1 Camper for £70