Money no object, most of us would love to have a large and luxurious caravan to holiday in. The trouble is, we would need a big and heavy tow car to match.

Shop for a new heavyweight 4×4 and you’ll need deep pockets, and the patience to wait for delivery, because many new cars are in short supply. Alternatively, you could buy secondhand and not only save money, but also find yourself behind the wheel of a new-to-you SUV in the time it takes to fill out the paperwork.

A relatively recent big 4×4 will have most of the safety aids of a brand new car, and shouldn’t be too far off the pace in terms of fuel economy and emissions. There’s no doubt that choosing a secondhand SUV will make your budget go a lot further. These are five of our favourites – you can also see our best used tow car guide for more pre-owned inspiration. The Volkswagen Touareg is one of the most underrated cars on the road. Badge-conscious new car buyers tend to overlook it in favour of a premium SUV from Audi, Land Rover or Mercedes, but for savvy used car buyers, the Touareg can be a bargain.

The current generation is still quite new and fairly pricey, even as a pre-owned buy. Instead, we would look for the previous model, sold between 2011 and 2018. Ideally, we’d go for a car from 2015 onwards, when this model benefited from some mid-life improvements.

Instead of a modest family hatch, your money will buy you a full-fat two-tonne 4×4 with a brawny 3.0-litre diesel engine. There’s no caravan the big VW isn’t capable of towing.

The Touareg is not just more affordable than most upmarket alternatives, it’s more durable, too. It tows as well or better than any SUV you can buy for £25,000. Stability at speed is first rate, and four-wheel drive makes for easy hill starts. It will tow your luxury twin-axle from one end of the country to the other without breaking a sweat.

The SsangYong Rexton is keenly priced as a new car, but after a few years it gets a lot cheaper.

We looked online and found a choice of 2018 models priced around £24,000. What’s more, many of these cars already had a towbar – one of the benefits of buying from a brand that’s always seen caravanners as an important market.

The second-generation Rexton is a huge improvement over the earlier model.

This one is better to drive, more generously equipped and a more able tow car.

In fact, if you’ve spent time in the old Rexton W, compare it with the later car and you’d think you must have skipped a generation or two. The cabin is better made from higher quality materials, and there’s space for seven inside. Admittedly the third row is quite cramped, but with the rearmost seats folded, there’s plenty of space for five, and a big boot.

SsangYong has stuck with body-on-frame construction for the Rexton, which contributes to its high kerbweight and excellent performance off road. However, it doesn’t make the Rexton the most sophisticated machine on Tarmac, and big bumps send a shudder through the cabin. You do feel some movements while towing on windy days.

It’s not perfect, but it is a lot of tow car for the money. Lexus has been making hybrids for longer than just about anyone else. It’s safe to say Toyota’s prestige brand knew what it was doing by the time the fourth-generation RX was revealed back in 2015.

Go for an RX 450h, and your luxury SUV will be powered by a V6 petrol engine and a pair of electric motors. Get all three power sources working together and there’s a healthy total of 313hp, enough to tow any sensibly matched caravan.

Given the kerbweight of 2100kg, the 85% match figure is 1785kg, well within the legal towing limit of two tonnes. Of the car’s weights and capacities, only the maximum noseweight of 80kg is a disappointment.

These cars hold their value well, but early models are now available at tempting prices. Among the used examples we found online was a 66-plate car with 40,000 miles on the clock, at £27,499. This Luxury spec car was packed with kit, including leather upholstery, climate control and sat nav. It’s not the heaviest, quickest or most prestigious SUV on the road, but the Škoda Kodiaq makes an excellent tow car.

The Škoda is good value new, and early examples are now becoming increasingly affordable on the secondhand market.

Compared with the other SUVs we’ve chosen, the Kodiaq is relatively light, so it won’t make a good match for quite such a wide range of tourers.

On the other hand, it will be cheaper to fuel, which has to be an important consideration with the sky-high price of diesel. With this engine, be sure to choose the five-seat manual or the DSG, as bizarrely, the seven-seat manual isn’t approved for towing.

Like the Santa Fe, the Kodiaq comes in five- and seven-seat versions. The one we found is a five-seater, with a huge boot.

As a tow car, the Škoda is stable and composed, two things the best tow cars will always offer. It won’t be as rock-solid as the Touareg, but it will cost a lot less to run.

See our review of the 2018 Skoda Kodiaq If you have been reading this and thinking “£25k isn’t really my idea of a bargain”, then let us point you in the direction of the Hyundai Santa Fe.

The version sold from 2013 to 2018 is now really cheap, especially if you look for a car from its early years on sale.

These days, if you are in the market for a brand new Santa Fe, you’ll choose between hybrid and plug-in hybrid versions.

Go back nearly a decade and diesel was still king. With 197hp, the Santa Fe’s 2.2-litre diesel engine doesn’t have the punch of a Lexus hybrid or the mighty V6 diesel in the Touareg, but it’s strong enough to haul a big caravan and a family’s luggage.

The Santa Fe was sold in both five- and seven-seat versions. The seven-seater is more sought after, but if five seats are enough for you, there’s no reason to pay extra for seats you’ll never use.

Hyundai also has a solid reputation for reliability, and although the original new car warranty will have long since ended on a 2014 model, we’d still buy with great confidence, especially if you can find a car that has a full service history. 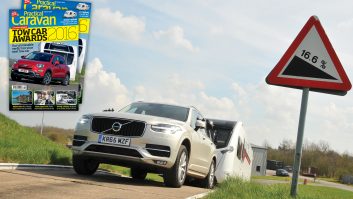 Practical Caravan’s May issue is a city breaks special!