Kielder Water, the biggest man-made lake in England by capacity, and the forest around it, offer plenty of outdoor activities when you visit Northumberland on your caravan holidays If you visit Northumberland on your caravan holidays, why not go to Red Barns beach, just north of Seahouses, which is one of the best places to view the Farne Islands Visit Berwick-upon-Tweed on your caravan holidays in Northumberland and take in the 17th-century Old Bridge, which is still part of the main London to Edinburgh road route 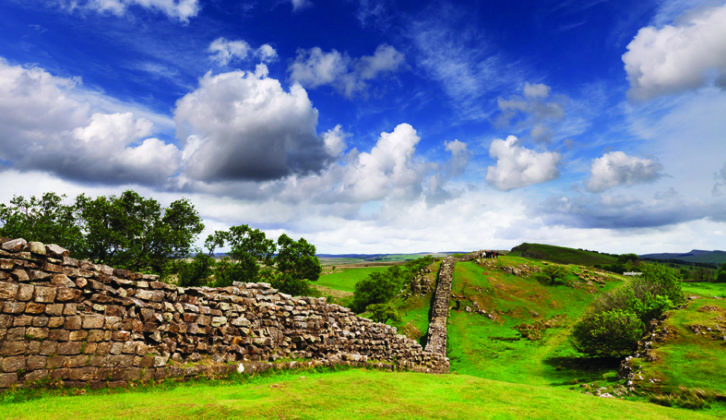 Hadrian’s Wall under a dramatic sky at Walltown Crags, Northumberland Though manmade, it’s hard to believe such is the attractiveness of the area, with tiny inlets and creeks feeding the reservoir and the North Tyne River and the prospect of seeing one of the most kingly of hunting birds, the osprey. It really is a place of majestic beauty and where you can gain a sense of being utterly remote. That said, there are a couple of caravan parks within the area – one lakeside, one forest-based so you can choose your preference for scenic views.

Kielder Forest Park has been designated as an International Dark Sky Park and reputedly has the darkest skies in England. That might not sound especially attractive, until you discover that it’s totally free from light pollution allowing visitors to actually see light skies – filled with the Milky Way, planets, meteor showers and great galaxies. For a closer view, there’s the internationally renowned Kielder Observatory. Meanwhile, history buffs can head to Kielder Castle, one time seat of the Duke of Northumberland, and ecologists to the Kielder Salmon Centre, where a breeding programme to increase the population of the endangered freshwater pearl mussel is taking place.

Kielder Forest Park is a part of Redesdale, an area within the National Park that covers some of the wildest and remote parts of the county. The village of Otterburn is at its heart, with Otterburn Mill a focal point for visitors and shoppers alike.

In the very north of the county, shared with neighbouring Scotland, are the Cheviot Hills, with the highest point, The Cheviot, at 816 metres, just on the Northumberland side. The most northern stretch of The Pennine Way National Trail runs quite literally along the border between Scotland and England here. Northeast are the delightful cluster estate villages of Ford, Etal and Crookham, creating an enjoyable day out along the Till valley but don’t miss the Flodden Battlefield and EcoMuseum. The serenely picturesque fields tell a ghastly story of bloodshed at the 1513 Battle of Flodden, when 14,000 men were killed in just one afternoon.

Within the centre of the county are some of the prettiest areas, with open meadows matching wild moorland along the Coquet Valley close to the town of Rothbury and one of the National Trust’s northern gems, Cragside. The Victorian masterpiece was the first house in the world to be lit by hydroelectricity and is hidden among rhododendron bushes, towering conifers and rocky crags.

However, it is Northumberland’s coastline that is one of its greatest assets, with vast, empty beaches under huge skies. Indeed a forty-mile stretch of coastline, from the Elizabethan-walled border town of Berwick-upon-Tweed south, is designated as an Area of Outstanding Natural Beauty. And so it is. Some of the best beaches are situated around Bamburgh, Beadnell and, further south, close to Amble. Every now and again a magnificent castle pops up to defend the shoreline, like Bamburgh, Lindisfarne or Dunstanburgh. And in between these are several campsites and caravan parks.

Lindisfarne Castle is on Holy Island, accessed via a tidal causeway. Aside from the 16th-century fort, which was significantly altered by Sir Edwin Lutyens in 1901 as an Arts and Crafts-style family home, the island is famous for its Priory, the home of St Cuthbert, one of the most important figures in early Christianity in England. Northumberland would not be the county that it is without the Saint, such are the strong ties; he is the patron saint of the county. Electronic copies of the Lindisfarne Gospels, significant illuminated manuscripts, are on the island for show.

A little further south, close to Bamburgh and Seahouses are the Farne Islands. Like Lindisfarne, they were once home to St Cuthbert, who lived there as a hermit in the 7th century. Today, they are home to the largest breeding colony of grey and Atlantic seals in England. Boat trips to the islands reward visitors with incredible wildlife scenes, including the seabirds that live and nest there.

Further south still is Howick Hall, the home of Earl Grey tea – the house was the ancestral home of the Grey family and that of the former Prime Minister, Earl Grey. Close by, just inland, is the gorgeous town of Alnwick with its own castle. The property has arguably some of the most spectacular modern gardens in Britain, although it is the 14th-century castle itself that will be familiar to Harry Potter fans, used in the making of the first two films as Hogwarts School of Witchcraft and Wizardry.

Of course, Northumberland’s history goes way beyond a castle built a few centuries ago. The Roman Hadrian’s Wall cuts across the county east to west, a UNESCO World Heritage Site that is 84 miles long. You can walk virtually the full length on the long distance footpath, but a lot of the stone wall itself has gone. Some of the best stretches to view the wall are those within the Northumberland National Park, around the attractive town of Haltwhistle, deemed the ‘capital’ for walkers of the Wall.

1.Watch the skies in an alternative way at Skyspace, a circular room that is illuminated by a combination of natural and artificial light to provide a constantly changing display of tone and colour. Close to the Kielder Observatory, Skyspace is an art and architecture installation to see during holidays near Kielder Water and Forest Park in Northumberland.

2.Visit Ashington and go to Woodhorn Museum, a celebration of Northumberland’s mining heritage, on your caravan holidays. Here, you can explore the Grade II listed colliery buildings and learn about life underground in this former mining community.

3.Take in the sights along Hadrian’s Wall when you visit Northumberland, either walking the National Trail, cycling along the designated cycle route, or by rail, using the Hadrian’s Wall Country Line Day Ranger ticker that links Newcastle and Carlisle. Chesters Roman Fort and Museum, Carrawburgh, Housesteads Fort and Vindolanda are all worthy Roman attractions along the way.

4.If walking the length of Hadrian’s Wall feels just too much, try the Lakeside Way multi-user trail. The 26-mile path encircles Kielder Water’s shoreline and is suitable for mobility scooters, wheelchairs and pushchairs in addition to walkers, cyclists and horseriders. Naturally, the route provides fantastic views of the water.

5.Enjoy a boat ride from Seahouses to the nearby Farne Islands and Longstone Lighthouse, where the father of Victorian heroine Grace Darling was the lighthouse keeper. There in 1838, at the age of 22 years, she rescued survivors from the stricken paddle steamer, SS Forfarshire. The RNLI Grace Darling Museum in nearby Bamburgh is dedicated to her.

Events very much take place all year round in Northumberland, kicked off by the Tar Bar’l New Year celebrations in Allendale when costumed men carry flaming barrels of tar on their heads! Brightening up winter, the Snowdrop Festival at Howick Hall Gardens provides a welcome display in February. Every May, the seaside town of Amble goes puffin mad at the Puffin Festival when it welcomes newly hatched arrivals on nearby Coquet Island.

Throughout the summer there are numerous food festivals, including the Mouth of the Tweed Food Festival in Berwick during July.

For the active, The Haltwhistle Walking Festival during late April and May is a biggie in the walking calendar, while Rothbury has its own walking fest in June. September sees the Kielder Challenge Walk, followed by the Kielder Marathon in October.

Especially for 2022, the 55-56°North is a year-long series of activities, celebrating a range of cultural and heritage events that will take place throughout the region. Highlights will include Under the Stars, the Lindisfarne Gospels and the Hadrian’s Wall 1900 Festival.

If you’re heading to Northumberland for your caravan holidays, what’s the best route to take when towing? The M1 motorway is one of the quickest routes from the south, which runs as far as Leeds. From there on, the A1(M) picks up direct to Newcastle and the predominantly single carriageway A1 thereafter to Berwick-upon-Tweed. The A1 from Edinburgh is also one of the quickest routes into the region from the north, though the A697 from Coldstream and the A68 from Jedburgh are also particularly scenic routes that take you into the heart of the county.

Travelling east-west, the A69 between Carlisle and Newcastle-upon-Tyne provides scenic cross-country touring to reach the southern areas of Northumberland, while the A68 gets right into the heart of the county, crossing the Cheviot Hills. Consideration should be taken of weather conditions for both these exposed routes during winter and when blustery.

You’ll find rural country lanes to be considerably quieter than in other parts of the country, particularly in the more remote areas of the Pennines, so be mindful of this if you choose to visit Northumberland on your caravan holidays.

There are plenty of good campsites in Northumberland. For some of the best campsites in Northumberland, take your pick from the Top 100 Sites. In the 2022 awards, as voted for by you. more than a dozen camping and touring parks featured from North East England, including Chain Bridge Caravan Site and Ord House Country Park, both on the outskirts of Berwick-upon-Tweed.

Best caravans for 2022: our top picks

A quarter of the county is designated as Northumberland National Park, and much of that is taken up by Kielder Forest and Water