Loch Gairloch is one of many lochs to enjoy on your caravan holiday in Scotland, as Practical Caravan’s travel guide explains 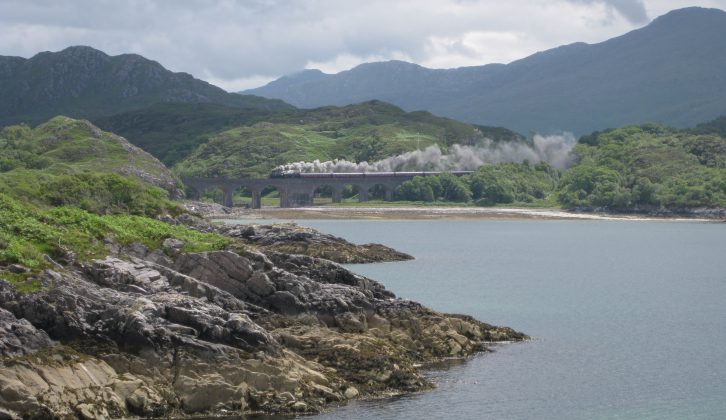 Visit Scotland in your ‘van and find many a memorable vista such as this, looking over the Sound of Jura, just outside Arduaine Wake to stunning views all year round when you tour Scotland The pretty town of Kirkcudbright, in south-west Scotland, is one of many gems waiting for you to discover Take a scenic overhead tour of the Loch Lomond and the Trossachs National Park, taking off from the waters of Loch Lomond in a seaplane.

Search for Nessie, the Loch Ness Monster, with a boat trip on the 23-mile long Loch Ness and read about the history of her sightings at one of the visitor centres in Drumnadrocht. While there, enjoy a walk along the Great Glen Way or paddle in a canoe along the Caledonian Canal.

Go skiing from the Cairngorm Ski Area near Aviemore (there’s a purpose-built campsite at Glenmore just for the job), and visit the free-ranging reindeer herd up on the mountain.

Walk the Royal Mile in Edinburgh for some elegant city shopping (where you can purchase a kilt) or witness the Art Nouveau architectural and design work and fine furniture of Charles Rennie Mackintosh at several locations in Glasgow.

Enjoy a day trip to the Orkney Islands. You can hop on a ferry for a short 40-minute passenger crossing from John O’Groats to South Ronaldsay during the summer months. Or take your car using the ferry services from Gills Bay to St Margaret’s Hope (60 minutes) or Scrabster to Stromness (90 minutes).

Annual events include things like the mighty Burns Night on 25 January, the anniversary of the birth of Scotland’s most loved writer, Robert Burns. The Scottish Snowdrop Festival takes place throughout February at various locations around the country, but particularly in Dundee and St Andrews.

May is Whisky Month, with related events across the country, particularly on World Whisky Day. And at the beginning of May it’s the Spirit of Speyside Whisky Festival, a combination of drinks all round with music, comedy and local crafts. Later in May is the Cairngorms Nature Festival, providing opportunities for visitors to get up close and personal with nature in the national park.

Taking place countrywide, although predominantly in the Highlands during the summer months, are the Highland Games and Gatherings. While in the towns of the Scottish Borders, summer sees the Return to the Ridings, one of the oldest equestrian festivals in the world.

St Andrew’s Day, 30 November, is deemed a Bank Holiday with many events laid on. And let us not forget Hogmanay, which sees out the old and brings in the New Year. Edinburgh, in particular, holds the focus on New Year celebrations, but then the city has become the capital of festivals.

Use the M6/A74(M) and the M8 for the west of Scotland and the M90/A90 for the east to Aberdeen. The M8 links Glasgow and Edinburgh. Thereon north, the roads are predominantly single carriageway but for the dual carriageway to Aberdeen.

Many roads in Scotland make a pleasurable and scenic drive, but plan fuel stops carefully as there can be large distances between service stations.  Check with your destination campsite for any difficulty with access when towing a large unit once off the main roads.