The Peak District is ideal touring country for caravan holidays, especially if you enjoy walking, cycling, climbing and sightseeing The Old Original Bakewell Pudding Shop still produces the town’s best-known treat, so be sure to visit Bakewell on your tour Visit Castleton in the Peak District and go to Peveril Castle – there’s a great view from the 60ft keep! When you visit the Peak District on your caravan holidays, head to the Derwent Reservoir – when it is full, water cascades over the dam in spectacular fashion 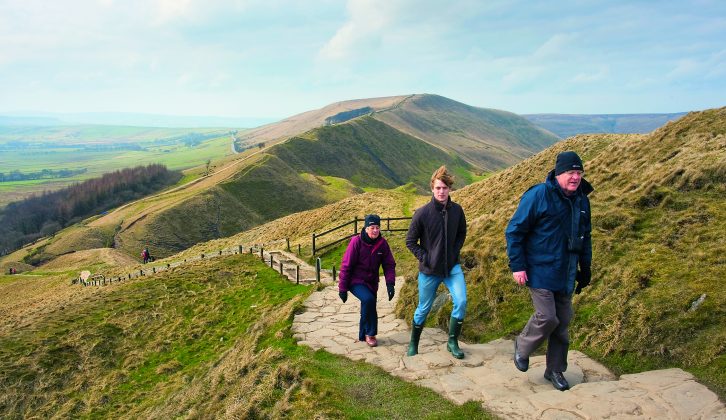 Walk, cycle or ride along the 13-mile Tissington Trail, a breathtaking route in Britain’s Peak District Dramatic rock formations on the northern edge of Kinder Scout in the Peak District national park. Popular visitor attractions, such as Chatsworth House, are much quieter

While Britain’s oldest national park is much associated with Derbyshire, the Peak District actually spreads into three counties – for Staffordshire and Cheshire make up its southwest corner. The region is generally ‘divided’ into two given its changing landscape – filled with rugged gritstone moorland in the High Peak area to the north and more gentle rolling hills and river valleys in the limestone-based White Peak area to the south.

Neither one is especially more beautiful than the other, they’re just different – and both need exploring! And with a mass of campsites – whether independent, club-owned or five-van CLs/CSs – it’s easy to take a caravan holiday in the Peak District.

The Peak District is considered one of Britain’s best and favourite natural playgrounds, and understandably so. Walkers are spoilt for choice as to which hill or valley to tackle first – be it Kinder Scout and the Pennine Way, Hollins Cross, Win Hill or the Limestone Way in the south. And for more manicured, pleasant family ambles, there are the picturesque National Trust-owned estates of Longshaws, in the northeast close to Sheffield, and Ilam Park in the south, near Ashbourne.

Cyclists get it good, too. In addition to the Upper Derwent Reservoirs (see below), you’ll find off-road cycling along former railway lines such as the Tissington Trail near Ashbourne and the better-known Monsal Trail, which links Bakewell and Buxton. There are campsites along the route so you can cycle or walk one way and get the bus back. And a great off-road trail for families is the Manifold Way, just eight-miles long from Hulme End, and with a couple of campsites at the start. With Tarmac, it’s suitable for wheelchair users, too.

For more heart-racing stuff, you’ll find climbers around Winnats Pass, Stoney Middleton and Stanage Edge and paragliders on Rushup Edge – trust us, you won’t be rushing up it! Alternatively, for something a little more sedate, it’s possible to hire a fishing boat on Ladybower Reservoir, explore Elizabethan architecture at the intimate Haddon Hall or cuddle pet lambs on the Chatsworth Estate farm.

If food is more your thing, well there are pubs and tearooms aplenty in Castleton, free spring water on tap (literally – from St Anne’s Well)) in Buxton, and, of course, Bakewell Pudding in Bakewell. Our pick of the best spots, however, would be afternoon tea or a pub lunch overlooking the duck pond in the very picturesque village of Hartington.

Located between the two massive conurbations of Greater Manchester and West Yorkshire, the Peak District is inclined to fill up of a weekend, particularly around long-time favourites such as Matlock Bath, Hope and the Chatsworth Estate. But it’s still possible to find a little piece of solitude. To get away from it all, head to the Govt Valley south of Whaley Bridge, Shutlingsloe and Tegg’s Nose in Cheshire’s claim on the Peak District or The Roaches, Grindon Moor and the Hamps Valley in the south of the area.

1.Take in the views of the Peak District on two wheels; there are many off-road cycle tracks, especially around the Upper Derwent Valley reservoirs, which were used as the real-life testing ground and film set for The Dambusters. There’s cycle hire available at the Visitor Centre, close to the Derwent Reservoir. A great circular ten-mile ride from the Visitor Centre includes the banks of both Derwent and Howden Reservoirs.

2.Make a start on the Pennine Way, beginning (or ending) as it does from the pretty village of Edale. It begins with virtually level ground and just the gentlest of climbs for the first couple of miles – and offering magnificent views – before you really have to knuckle down to some harsh slopes at Jacob’s Ladder.

3.Attend the opera at Buxton where you can see any number of classics in addition to lesser-known works. The opera house at Buxton is considered one of the finest in the country.

4.Go underground by visiting any number of caverns, many of them situated around Castleton. Each one offers something slightly different: Peak Cavern, affectionately known by locals as The Devil’s Arse, is a completely natural hole and is the only one accessed from the village; Speedwell Cavern includes an underground canal where visitors can take a boat trip through the cave; while both Treak Cliff Cavern and Blue John Cavern offer impressive stalactites and stalagmites.

5.For fine dining outdoors in the Peak District, visit Chatsworth House and also the award-winning Chatsworth Estate Farm Shop in Pilsley to stock up on some picnic fare then spread out a rug and enjoy an al fresco lunch in the Chatsworth Estate grounds – it has been voted Britain’s best heritage picnic place in the past.

Head to medieval Ashbourne on Shrove Tuesday for the annual Royal Shrovetide Football game involving a local derby. May sees the Chesterfield Area Walking Festival offer many guided and themed walks around the area for all ages, while on Ascension Day – and throughout the summer – you’ll find many towns and villages Well Dressing (decorating many water sources and wells), including Tissington (where the tradition allegedly originates), Hathersage, Youlgreave, Rowsley and Bollington.

Attention turns to Buxton in July for the Buxton International Festival, one of Britain’s largest opera-based fests; then in September and October, head across to the other side of the Peak District for the Matlock Bath Illuminations – no less cultural!

Pick your spot to pitch in the Peak District and the surrounding area from our annual Top 100 Sites Guide, as voted for by you. Clover Fields Touring Park, near Buxton, is one such campsite within easy reach of the park.

Being virtually slap-bang in the centre of England, access to the Peak District is relatively straight forward, with the M6 and M1 running north to south either side of the national park. Junction 29 off the M1, through Chesterfield to Bakewell is one of the straighter routes while Junction 26 through Matlock is really quite twisty with an awful lot of ‘up and down dale’; it’s less suitable for caravans.

From the west, one of the quickest routes to Buxton is Junction 15 off the M6 and the A53 via Leek, although the A537 from Macclesfield is arguably ‘prettier’ but twisty.

For Dove Dale and the very southern quarter of the national park, the A515 through Ashbourne offers a relatively easy route into the area.

Few routes within the area are inadvisable when towing, except Winnats Pass between Sparrowpit and Castleton – ‘vans should approach the Hope Valley from the east along the A6187 – and Mam Tor to Edale. Here, ‘vans should approach the Edale Valley carefully (it’s narrow) via Hope. Snake Pass (A57) and Woodhead Pass (A628) are usable (with care) when towing during the summer, but during the winter months they are often closed in bad weather and are worth avoiding.

Roads around the Upper Derwent Reservoirs are closed at weekends and Bank Holiday Mondays to all motorised traffic.

The Peak District is a favourite destination for many, considered to be one of Britain’s best natural playgrounds