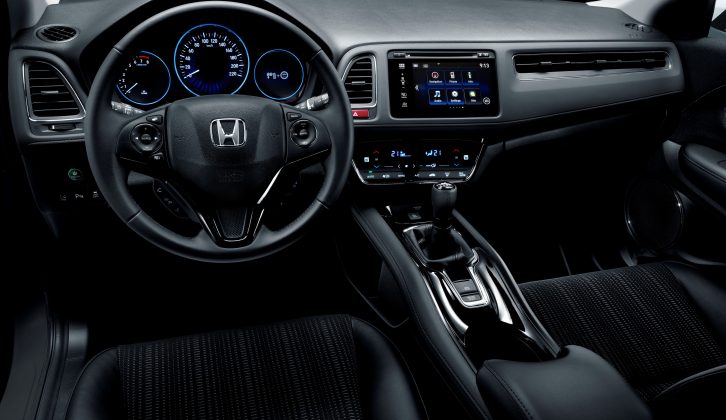 The base of the rear bench in the HR-V can be flipped up, creating extra luggage space – handy when on your caravan holidays A decade after the first HR-V went off sale, Honda will hope the new model can take a chunk of the crossover market

Have you ever arrived at a party one day early? That’s what Honda did with the original HR-V. With its 4×4-lite styling and hatchback practicality, Honda’s 1999 HR-V was a crossover before anyone knew what a crossover was.

When the HR-V went off sale in 2005 it wasn’t replaced, leaving the way clear for the Nissan Qashqai, Škoda Yeti and the many other crossovers that have launched since. As well as selling well to the general motoring public, many of these cars have proven popular with caravanners and make very good tow cars, as we’ve seen at our annual Tow Car Awards. Honda’s execs must have been kicking themselves.

An entire decade has passed since the HR-V gave up waiting for some other guests to arrive and went home. Now the party is in full swing, and the new HR-V will have to shout rather loudly to make itself heard.

It looks good enough to attract attention. Some of the styling cues are familiar from its big brother, the CR-V, but the coupé-like roofline and hidden rear door handles give the HR-V a sportier look.

The cabin shows real showroom appeal, too. The centre console is slightly angled towards the driver, the seven-inch touchscreen has been neatly integrated, and the standard of finish is high. However, you sit quite low to the ground. If you want a crossover because they sit the driver higher than a conventional hatchback, you may prefer one of the HR-V’s rivals.

At just under 4.3 metres long, the HR-V splits the difference between the Nissan Juke and Qashqai in terms of size. Inside, it feels much closer to the Qashqai, with surprisingly generous rear legroom. Adults can travel in comfort, although very tall passengers will find their heads close to the sloping roof.

There’s some clever thinking, too, in particular what Honda calls ‘Magic Seats’. There’s no actual witchcraft involved, just intelligent design; the base of the rear bench can be flipped up like a cinema seat, effectively creating a second large luggage space.

The boot itself is usefully big. Including the space under the floor, there’s 470 litres to fill. Fold the seats down and that increases to 1533 litres.

There’s a choice of two engines, although for tow car drivers the decision is pretty clear cut. The 1.6-litre petrol is available with a manual or automatic gearbox, but with just 114lb ft of torque it’s short of puff for towing. Kerbweights start from 1316kg (including 75kg for the driver not included in Honda’s published kerbweight) and the legal towing limit is just 1000kg.

The 1.6-litre diesel is much better suited to towing a caravan. It’s the same engine used in the Civic hatchback and CR-V SUV, with 118bhp and almost double the petrol engine’s torque figure: 221lb ft.

So long as you don’t let the revs drop too low, the engine pulls well and should comfortably tow any suitably matched caravan. Kerbweights start from 1399kg, giving an 85% match figure of 1189kg. The legal towing limit is 1400kg, and the maximum noseweight is 70kg.

It’s not an especially quiet engine, but the slick-shifting six-speed manual gearbox helps make the most of the available performance. Expect low fuel bills if you get anywhere near the official combined economy figure of 70.6mpg (68.9mpg for SE and EX spec cars).

Take the long way home and you’ll find the HR-V is pleasant enough to drive, without being especially engaging. The steering is very light and body movements could be better tied down over dips and crests, but the Honda corners neatly and the ride stays the comfortable side of firm. It’s neither as much fun as a Mazda CX-3 nor as smooth and refined as a Nissan Qashqai, and it’s a shame that 4×4 versions aren’t coming to the UK. Even so, the HR-V is a capable car.

Prices start from £17,955 for the petrol and £19,745 for the diesel. That buys you S spec, which has a long list of safety equipment including City-Brake Active, which can slow the car from low speeds if a collision is likely and the driver doesn’t take action. A DAB radio, Bluetooth connectivity, 16-inch alloys, climate control and cruise control are included in the price.

So, should you buy a Honda HR-V rather than one of the better established crossovers? While not a clear class-leader, the HR-V is there or thereabouts in most respects – and we look forward to finding out what tow car ability it has. Welcome back to the party, Honda.