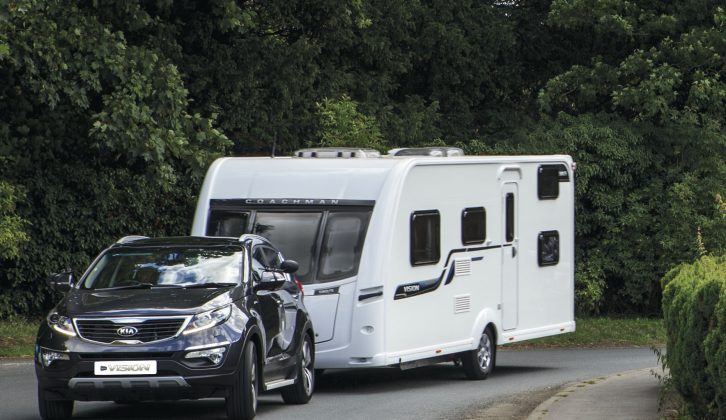 New mid-market caravans launched into a crowded and competitive market need to be top-notch. Luckily, Hull-based manufacturer Coachman is renowned for its sturdy, high-quality tourers. People who had bought secondhand Coachmans rated them so highly in our last Owner Satisfaction Awards that they came out top in the pre-owned category.

The big news from Coachman is the launch of its Vision lead-in range, replacing the Amara line-up. Vision continues eight of the nine 2013 Amara layouts, but deletes the twin axle, six-berth 655/6. Although it is Coachman’s lead-in range, it competes in the mid-market sector against the likes of the Elddis Avanté and Bailey’s Pegasus GT65.

Externally, Vision has one-piece aluminium sidewalls – as did the outgoing Amara – but gets new front and rear ABS panels, and a colour-coded white awning channel. You can stand on the hitch cover for better high-level cleaning, and the alloy wheels are a standard item. Although it picks up many styling cues from Coachman’s upper-level ranges, it doesn’t offer the stylish sunroof of its Pastiche, VIP and Laser stablemates – or of its nearest rivals, such as the Pegasus GT65.

Step inside, and you’ll see ash furniture that complements the oatmeal-and-turquoise upholstery. The kitchen lockers get their own fabric-look veneer to differentiate the area from the rest of the caravan.

In the kitchen, the work surface is slightly higher than in the 2013 Amaras, allowing room for a cutlery drawer above the fridge. The oval sink has a glass lid, a plastic bowl and a drainer, while further along are a dual-fuel hob and full oven with grill. There’s also a microwave above the hob, concealed in a dedicated locker.

Crucially, prices are around two per cent lower than for the Amaras. For example, the 580/5, which we awarded best caravan for small families in our 2013 Tourer of the Year Awards, is £500 cheaper as part of the Vision range. Similarly, estimated weights are up to 40kg lower than for comparable Amaras.

“Vision represents a big step for Coachman: the caravans look fabulous and are loaded with equipment, but it remains to be seen whether the Vision’s weights and prices have been cut enough to attract more buyers than for the Amara.”

A two-berth model with a parallel lounge, corner washroom and end kitchen. The fridge is separated from the main kitchen unit, located just behind the nearside sofa. The wardrobe is located on a similar position, on the offside. The lounge can either be made up as one 2.04m x 1.5m double, or as two 1.86m x 0.73m singles. The 380/2 has an MTPLM of 1215kg.

A larger parallel lounge two-berth, with an end washroom and a midships kitchen. The spacious washroom has an integrated wardrobe and a separate shower cubicle, while the kitchen is split across the central corridor, with the fridge on the nearside and the main kitchen unit on the offside. The lounge can either be made up as one 2.04m x 1.5m double, or as two 1.86m x 0.73m singles. The MTPLM is 1325kg.

A parallel lounge four-berth, with a midships dinette that converts into a pair of bunk bed, and an end washroom with a separate shower cubicle and an integrated wardrobe. The dinette is located immediately aft of the offside lounge sofa, while the kitchen is located rear of the nearside sofa. The MTPLM is 1470kg.

A four-berth with a parallel lounge, kitchen amidships and a fixed double bed, with a full-width end washroom behind it. The washroom includes a separate shower tray, and there’s a partition that allows you to cordon off the rear bed and washroom, creating an ‘en-suite’ bedroom. The 560/4 has an MTPLM of 1520kg.

A family six-berth with a parallel lounge at the front, a side kitchen on the nearside, a side washroom on the offside, a rear lounge and longitudinal fixed bunks. The rear lounge converts into a bed, allowing you to sleep six. While the washroom is compact, it still includes a separate shower stall. The MTPLM is 1595kg.

A five-berth with a parallel lounge, side dinette, side kitchen, rear corner fixed bunks and a rear corner washroom. The dinette converts into a single bed, and the spacious corner washroom features a circular shower cubicle. The kitchen is compact, with a half-height fridge. The MTPLM is 1565kg.

A six-berth with a parallel lounge in the front, a side dinette on the nearside, offside longitudinal bunks and a full-width end washroom with an integrated wardrobe and a separate, circular shower stall. Unlike the other six-berth in the range, the 640/6 has its kitchen across from the caravan door. The MTPLM is 1690kg.

The Vision range represents a big step for Coachman