There’s a new exterior look for the 2019 Elddis Avanté range, seen here on the 586 Two further bunks are available in the rear nearside corner of the 2019 Elddis Avanté 586, making six berths in total In 2019 model year flavour, the twin-axle Compass Camino 674 certainly looks sharp on the outside The Compass Camino 674’s kitchen comes with a dual-fuel cooker, for maximum flexibility on tour, a separate oven and grill and a sink with smart mixer tap At the rear of the Compass Camino 674, you’ll find the on-trend fixed twin single beds. There’s plenty of storage here, including a smart centre chest 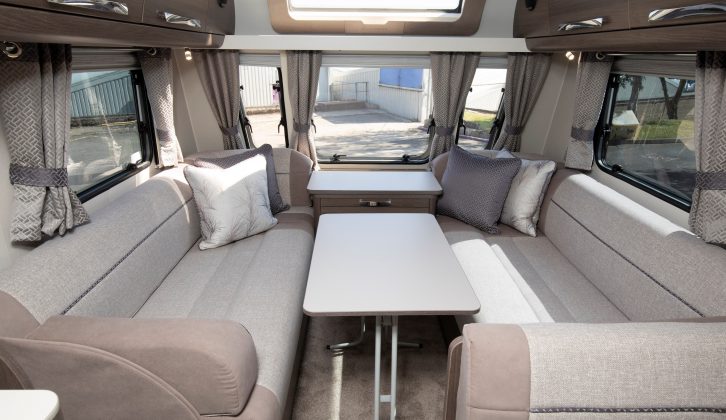 The specification is unmistakably Buccaneer, though, with quality finishes and super-comfortable lounge seating Looking towards the rear in the Buccaneer Aruba, there’s a high-specification midships kitchen with cast iron pan stands on the cooker, and a dinette that doubles as a make-up bed A long rooflight tracks the line of the Buccaneer Aruba’s central gangway, while an Omnivent extractor fan above the kitchen will quickly rid the van of steam and cooking odours A comfortable French bed takes up the nearside rear corner of the Buccaneer Aruba. It raises on gas struts to reveal a large storage area

The County Durham firm’s first full season since being acquired by Germany’s Erwin Hymer Group focused on motorhomes, with the relaunch of Compass and a move into van conversions.

But there was still room for developments in EHG UK caravans. The most action has taken place within the flagship Buccaneer range, with one new model and two re-worked ones.

For the 2019 season this continues as a five-model range, but the six-berth Galera has been dropped in favour of the Aruba. This has a similar layout to its predecessor, except that the bunks and children’s dinette at the back have been replaced by a fixed rear corner bed.

The Barracuda, meanwhile, introduced last year as a special model with an L-shaped lounge and 32-inch TV, has been slightly remodelled. The narrow open coat-hanging space to the right of the door as you came in has been replaced by a larger cupboard and storage unit with conventional doors. The peninsula-style kitchen has been shortened to make more of a gangway into the lounge. In its place, the designers have included a two-level worktop that acts as a divider between kitchen and lounge. But the L-shaped seating and TV remain.

For 2019 all Buccaneer models now come with the new Thetford K1520 oven with a separate grill – and with cast iron pan stands on the hob that you are more likely to see at home. Two wide pull-out baskets are also included in the kitchen storage. All Erwin Hymer UK models now come with ‘Twine’ vinyl flooring.

There’s a pair of USB sockets in the interior, LED spotlights in the front lounge, a newly designed cutlery tray in the kitchen, and new handles on all drawers and lockers.

Furniture is in dark ‘Cassino Ash’, with coordinating ‘Tavira’ upholstery, which, like Erwin Hymer UK models this year, is in Aquaclean fabric designed to be cleaned by wiping. All models are now priced at £33,399, except for the Barracuda, which costs £33,699. That’s an across-the-board rise of £700.

Changes to other brands

The only other redeveloped layout this year comes in the Elddis Avanté, Compass Casita and entry-level Xplore ranges. The six-berth 586, with fixed bunks and a second dinette that makes into another pair of bunks, has had its rear washroom changed.

Instead of sitting squarely on the corner, it now fits as a rectangle down the side. This is to make way for a larger wardrobe at the centre of the rear panel. All Avantés and Casitas this season also come with the new Thetford oven (but with a conventional caravan hob) and a new cutlery tray, as well as new LED spotlights, more hooks and an EcoCamel showerhead in the bathroom, and new locker door handles. Both ranges stretch from £18,149 to £23,299, a rise of between £600 and £740.

Xplores also come with new LED lights, locker door handles, washroom hooks and cutlery tray, and a striking grey and yellow upholstery scheme known as ‘Shoreditch in Citron’. Prices range from £13,699 to £16,999, up between £450 and £500.

The Elddis Affinity and Compass Capiro ranges benefit from the same new features as the Avantés and Casitas, with the addition of an Alde load monitor.

This device controls the level of power flowing through your caravan to prevent a blowout if someone suddenly turned on a device that tripped the fuse on your hook-up.

The furniture and upholstery combination is the same Cassino Ash and Tavira as that found in the Buccaneer. Prices for these ranges have risen by at least £500, from £20,899 to £22,499.

The upmarket Elddis Crusaders come with a new rear panel for the 2019 season.

For a first look review of the Elddis Avanté 586, see the September issue of Practical Caravan, on sale now

The most action has taken place within the flagship Buccaneer range, with one new model and two re-worked ones, but there are also changes to Elddis Avanté, Compass Casita and Xplore