There’s plenty of news from Lunar Caravans for the 2018 season – get stuck in! The skylight and ambient lighting mean whether night or day, the interior of the Alaria is well lit You also get this rather smart shower in the Alaria, the range-topping collection from Lunar Caravans At the other end of the range, the entry-level Venus gets a new external look New soft furnishings, kitchen worktops, and locker doors and handles come to the Venus range for 2018 The two-berth Lunar Ariva continues into 2018 The Ariva has new soft furnishings, too, called Vibe 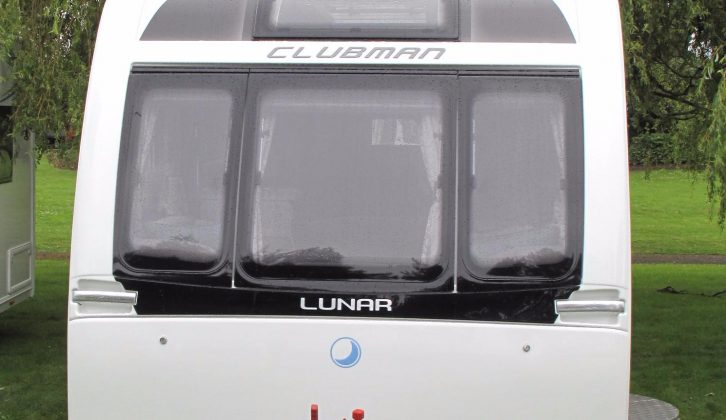 There’s a new model in the Lunar Delta range for 2018, this island-bed TR Other changes for the Quasar range for 2018 include a new sunroof, cream locker doors and a new splashback in the kitchen – this is the Quasar 544

The two alternatively named brands that Lunar produces for the top and bottom of the market appear to have gained most focus for the new model year.

Let’s start with the budget Venus range, which comes into 2018 with crisp fresh new graphics on the outside and a new awning light.

There’s also a completely new interior based on ‘Aldira’ soft furnishings in grey, with brushed-oak locker doors and new handles that were the result of extensive consultation with Italian supplier Technoform. Kitchen worktops are also now cream laminate.

More radically, the home entertainment system featured in these vans will be the first time Lunar has experimented with a system that does not include a CD player.

Evidently the company thinks the young, budget-conscious families who may be attracted to Venus will prefer streaming and downloading.

To that effect, the 460 that was the only two-berth layout in the range has been discontinued, but the five others remain, including the best selling 620/6 twin-axle.

More space for the Alaria

The top-notch Alaria range was introduced mid-season last year, but this season already marks a change because all models are now 8ft wide.

The only reason why they couldn’t be at the launch was because a pit in the Lunar factory that is used to put roofs on all vans was not big enough to hold such a body! Over the past few months it has been widened so that it can.

There was only one prototype, the Alaria TI, at launch, although at the NEC all four models in the range will be on show, including the new TR featuring an in-line island bed – a layout repeated in the Delta range, which Alaria is based on.

One other notable change is that Alarias will no longer carry the interchangeable RGB lighting system.

Tweaks across the Quasar range

And it seems the brand’s design ethos has rubbed off on Lunar, too, because 2018 Quasars (and the two-berth Ariva) feature new ‘Vibe’ soft furnishings that wouldn’t look out of place in a Joules catalogue.

Other additions include a sunroof, corner storage lockers that are similar to what you get in a Clubman, a pelmet with lighting, cream locker doors and, in the kitchen, a new ‘Twirl’ grey and white splashback, a chrome tap and a laminate worktop. All layouts stay the same.

The Stellar/Lexon range of Lunar caravans gets a new layout in the shape of the twin-axle 660, with a transverse island bed and rear washroom.

It’s a layout and chassis configuration that already exists in Quasars in the best-selling 674.

Otherwise, 2018 Lexons have a new single-cantilevered gas bottle locker in the front, ‘Malawi’ soft furnishings in grey and silver, and the same Twirl splashback, as well as an on-trend Belfast-style sink in the washroom.

All models in the Clubman line-up also get a new single gas bottle locker in front, the same Twirl splashback and that on-trend Belfast-style sink.

Other than that they stay much the same – which is not surprising, really, given that last year the Clubman SI was the best-selling Lunar of all, with over 300 models sold.

The Delta range, as mentioned, gets a new layout in the shape of the Delta TR.

But sales were up 14.7% over the same period, and it is carrying over into the new season less than 10% of what was built.

The company is also operating close to capacity, and is in talks about expanding its factory by 140,000 square feet.

At the same time, Lunar has invested a “six-figure sum” in a new testing facility that uses rainwater mixed with an additive that UV light can pick up to test for possible water ingress, both on new models and potentially on caravans in for repairs.