Owners Nic and Andy Vickery-Brown think this vintage caravan, Gertie, is great for business and pleasure 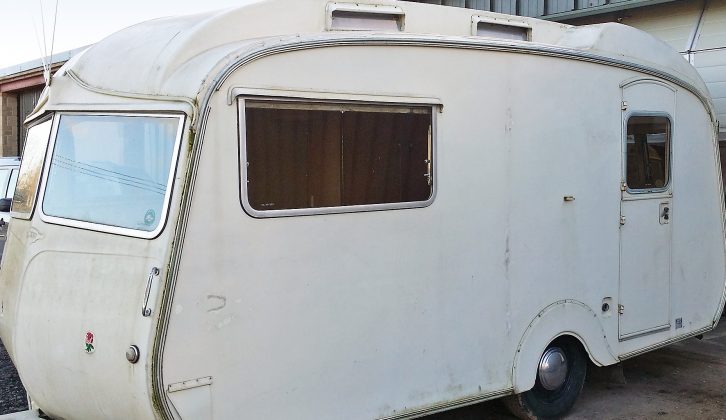 After a while searching for vintage caravans for sale, Gertie popped up – she’d been cared for but needed some TLC 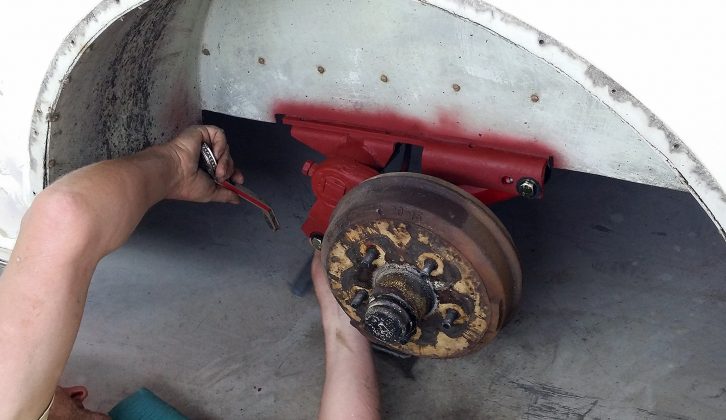 Gertie’s brakes needed to be changed, as part of the renovation Much of this vintage caravan’s internal furnishings remain, including the wooden units The Carlight Cassetta was built using revolutionary sandwich-wall construction methods, and had a glass-reinforced-plastic outer skin New life has been breathed into this lovely vintage van, ready for shows and caravan holidays alike Nic Vickery-Brown has been a full-time artist for two years; she’s enjoyed drawing since she was a little girl. But the growth of her work means that she now needs to attend numerous shows and other events. Unfortunately, the studio in her garden – known as ‘The Ladyshed’ – isn’t portable enough to take with her!

After trying (and failing) to use a gazebo when she was out and about, Nic decided to look for something more sturdy, reliable and totally prepared for our British summers.

“I really like the look and build quality of older caravans,” she says. “After a lot of evenings spent trawling through the internet I found ‘Gertie’, a 1968 Carlight Cassetta, on eBay.

“Gertie had just been relisted because there was a mix-up over when the original bidder could collect her. I’d been watching lots of old vans, and the ones I really liked went out of my price range pretty quickly. I cheekily contacted Gertie’s owner, offered him a price, and promised that we would pick her up the next week. Agreeing to buy her unseen was a bit worrying, but it seemed that it was meant to be.”

The gamble paid off when Nic travelled to collect the ageing van from its farmyard home of the past few years. “The tyres were fine, and she looked in pretty good nick. In addition, there was a lot of original paperwork with her; at some point she had obviously been cared for. But later we were to find out that she would need quite a bit of work.”

Before the TLC could start, Nic had to get the van from the seller to a workshop. The towing electrics were intermittent, so a light board was fitted, enabling Nic and husband Andy to hitch up and get on the road. They didn’t get far, though, because they were so keen to have a nose around that they pulled up in the nearest lay-by to investigate. They towed it with their 2001 Land Rover Discovery, nicknamed ‘Doris’.

Gertie was initially taken to Lucy Jayne Vintage Caravans, where her condition was assessed. The rotten parts of the frame were replaced, as well as the electrics, brakes and more. The tourer also desperately needed a respray, which she got. The cushions were reupholstered, the wood repainted and attractive wallpaper added.

“We’ve not changed her interior much, because it’s partly the reason that we bought her,” says Nic. “I really do love everything about the van: the clever storage, her looks and the quality of the fittings, which make her ideal for transporting and displaying my work in a unique way. Plus, at the end of the day we can pull the beds out and stay over. What more could you want?

“I’m especially fond of her mirror-backed cocktail cabinet, and have got some new tiny glasses to go in it – there’s even room for a pair of bottles. This will come in very handy when we are touring with her this summer!”

Gertie will still be used as a caravan. The main display area for pictures will be out in the awning, with smaller works and cards, and a studio space for Nic located inside.

Because this is Gertie’s first year, and it wasn’t clear when she would be ready to hit the road, Nic has decided to attend a few local shows. She and Andy will also use Gertie for caravan holidays, and have planned their first trip, to Norfolk, for later in the year.

With fond memories of childhood holidays in her uncle’s vans (which included a Safari, a Hobby and three Rapidos), when they would head off to rallies and the New Forest, Nic is looking forward to caravanning once again, whether it’s to a show or on tour.

“I really enjoyed the Moreton-in-Marsh agricultural show, which is the country’s biggest one-day event of its kind, and was held over the first weekend in September in Gloucestershire. I’m also hoping to use Gertie all year round, as events dictate; although they are mostly held in the summer and autumn months.

“I’ll be looking to travel further afield, too, so we could pop up anywhere!”

Agreeing to buy her unseen was a bit worrying, but it seemed that it was meant to be The art of switching off