When Jess Griffiths and Garry Partridge first saw this 1976 Swift Corniche 14 it was by torchlight – and it was being used as a garden shed! 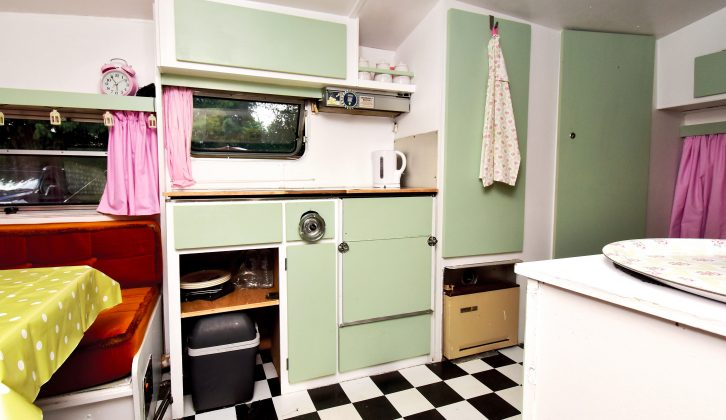 The refurbished furniture is fresh and bright, and works well with the black-and-white floor A mirror has been added to the side dresser, so you can make sure you look as good as your vintage caravan! We met up with Garry Partridge and Jess Griffiths in the Cotswolds, at Moreton-in-Marsh Caravan and Motorhome Club Site.

They were staying in their classic 1976 Swift tourer, and we couldn’t resist checking out their beloved Corniche 14.

Back in 2014, Garry and Jess went to look at a vintage caravan that was being used as a garden shed by a family in Gloucester.

By the time the couple arrived it was nightfall, and they did their best to inspect the Swift with a torch.

“We wanted to renovate an old caravan to our own interior design,” said Jess, “and of course to use it!”

The Corniche was bought and towed back home to be restored. The interior was old and tired, and it was decided that the Swift would be totally reworked inside – though the upholstery was retained as a stark reminder of the Swift’s 1970s origins.

The exterior of the Corniche 14 was largely left alone – nothing really needed doing – although the original grabhandles were replaced by the smart stainless-steel ones that it now wears.

The chassis was manufactured by Peak Trailers, a company based in Stockport that supplied most manufacturers at the time.

When this van was built, chassis were steel and had to be painted every few years to keep rust at bay.

The original carpet was stripped out and replaced with a black-and-white tiled effect, while the oak-veneered furniture was given a makeover in white and pastel-green – which works well.

The factory upholstery was left in place, but the interior walls were wallpapered then new curtains were added in pink.

Jess and Garry really gave the classic Swift their own personal stamp, with colours chosen to give the tourer a more contemporary look.

The ceiling got a fresh lick of white paint, which brings in more reflected daylight and adds to the Swift’s bright interior feel.

The Corniche had mains electrics as standard from 1977 (which was unusual for that period), but it had also been added at some stage to this ’76 model.

“Unfortunately, it had been wired to make the chassis live,” says Jess. Eeek!

That job was the first to be sorted out, and over the years more mains sockets have been added, along with a 12V socket by the door – ideal for Garry’s coolbox.

They’ve also kept the original underfloor coolbox, an idea that Swift used throughout the ’70s.

The gas lights in this vintage caravan have gone, however, replaced by LEDs, and Garry has added a CD/radio over the front lounge area.

The fridge (a standard fitment) was taken out and the space is now a useful storage area, but the original Carver SB1800 gas heater has been retained.

When it was new, you could add a blown-air outlet to the Carver for a few extra quid, and Jess and Garry’s Corniche has had this done at some point, too.

This 1976 Swift Corniche 14 has had new life breathed into it, and the couple have no plans to swap it – except, perhaps, for another classic!

Swift caravans have been in production since the end of 1964, and by the early 1970s the brand had its own distinctive look of triple windows front and rear, plus a green waistband.

The caravan market changed dramatically in the mid-’70s, with manufacturers moving into new segments.

Swift’s Peter Smith decided to launch an upmarket version of a best-seller from the firm’s mid-priced range – and the Corniche was born.

It was based on the popular Danette, but with features that were unusual outside of costly hand-built tourers.

Off to a strong start

The Corniche sold well in its first season, 1976, and over the following years new models were added.

As Swift’s luxury line, it was among the smartest tourers on the market, with aerodynamic GRP mouldings by the late ’80s setting it apart from other makers’ flagship ranges.

Swift’s purchase of Bessacarr in 1995 meant that the Corniche was no longer top dog, however, and by the end of 2002 it had been dropped.

The name has since returned on a dealer special.

They’ve kept the original underfloor coolbox, an idea that Swift used throughout the ’70s