Scatter cushions were included in the optional upgrade pack and the soft furnishings are of excellent quality, especially when you consider the Xplore range’s target market The Xplore 474 is generous with storage options throughout, while the light woodwork lends an airy feel 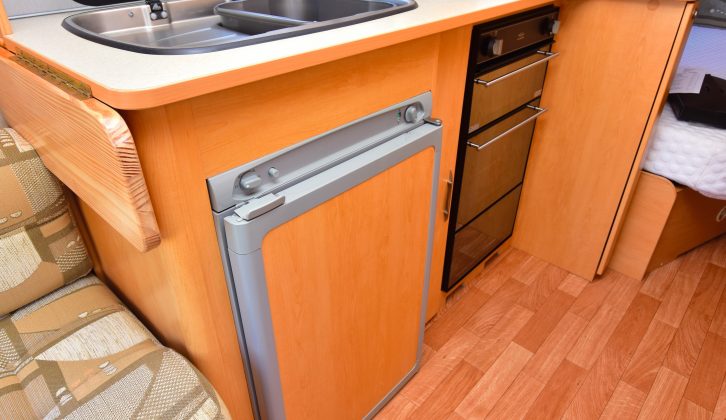 The Xplore line-up quickly proved itself to be a big success for Elddis, which launched it in 2008 to gain a foothold in the budget sector of the caravan market. The models’ very low weights allowed them to be towed by smaller tow cars. It saw off the Avondale Dart and Bailey Ranger, while Sprite retaliated with sub-ranges.

Their one-piece front windows mark the vans out as entry-level, but more upmarket features crop up, such as stainless-steel grabhandles and GRP front panels – although the rear just has a moulded section to house the road lights. The soft furnishings, fit and finish were comparable to those in pricier vans.

The rest of the kit list was as you’d expect: a combined oven/grill, a three-burner gas hob, blown-air heating, a fridge, a rooflight and an aerial. An options pack was sold with most Xplores, improving the specification.

Cost savings were made on the two-piece sidewalls and steel wheels – early models did not get alloys. These Xplore caravans ride on BPW chassis and a Winterhoff stabiliser was option, though our example has an Al-Ko.

I first inspected the Xplores before they were unveiled for 2008 and came away impressed. This held true for the 474 which, as in the 2009 version pictured, featured ample storage, a front lounge, plus a kitchen and a fixed double bed on the offside. The nearside corner washroom was compact but practical. The lighting wasn’t the best, but spots were fitted in the front corners of the lounge.

The Xplore was marketed as a standalone brand for two years, then became a range in the Elddis family. It was later relaunched as a separate marque again and remains so today. Xplores were also used as the basis for dealer specials such as the Mayfair and Wisp, with extra kit and upgraded soft furnishings.

Overall build quality is good, but we’re still watching to see how they stand up to general wear and tear over a long time. Couples were the main customers for the 474, so most examples that we spotted on used forecourts had been kept in good order. The 474 was replaced in 2010 by the larger 504.

When we viewed this 474, a customer was due to put down a deposit for it. At £6995 it was a great buy, given the mover and water containers in the deal. It did have floor delamination, but the buyer was happy to sort it.

Xplores make great first tourers, especially for families. The big twin-axle 596 and six-beth 546 are hard to find on forecourts, and don’t hang around. The 474 and 452 are perfect examples of good value-for-money caravans.

Ample storage overall and good-quality upholstery feature across the range, offering affordable alternatives to Sprites and Baileys — but good ones sell quickly.

And don’t forget to check out the Xplore caravans for sale with Practical Caravan!

Some details on the featured caravan: