Inspect the footwells for damp carpets, which can be a sign of poor door seals It’s good to know you get a full-sized spare, although boot space isn’t exceptional 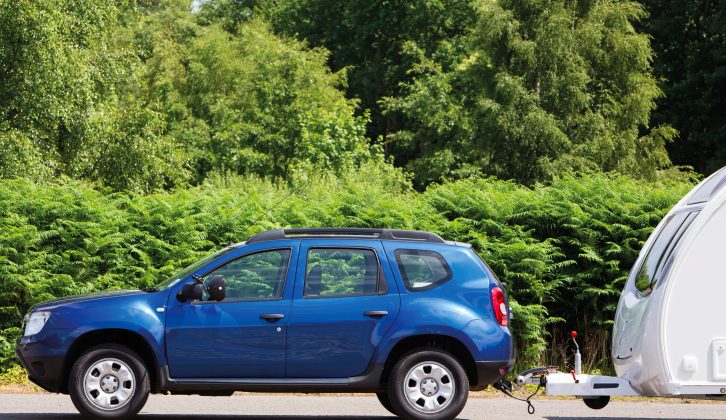 The Dacia Duster has grabbed a lot of attention and column inches by being cheap. This pound-store Renault (Dacia is a subsidiary of the French firm) throws up one question immediately: is it any good?

What tow car ability does this Dacia have? And, as a used buy, is it a good one?

The Duster isn’t just slightly cheap. When new, it cost about two-thirds the price of a Nissan Qashqai, which it rivals and with which it shares some engines.

The other reason the Duster is here is that, in its first year of production, it was voted Best Budget 4×4 at Practical Caravan’s Tow Car Awards, so it has some form when it comes to towing caravans.

The Duster also claims to be rugged and is popular in less developed parts of the world, building a case for consideration. Should other marques worry?

Arriving in January 2013, the Dacia Duster marked the Romanian company’s return to the UK market – it sold a few very different (and unrelated) Dusters here in the 1980s.

Styled as chunky 4x4s from 2013, the real cheapies were actually only front-wheel drive, so don’t be caught out by that. Adding all-wheel drive to the package came at a £2000 premium and still adds around £1100-£1200 to their secondhand values.

There were two four-cylinder engines from which to choose: a 1.6-litre petrol producing 103bhp and a 1.5-litre dCi diesel with 107bhp and 192lb ft of torque. However, you could only get the petrol engine as an entry-level Access model, for which no diesel option was offered.

The higher-trim versions – Ambiance and Laureate – were diesel-only, though all could be had in either two- or four-wheel drive.

Those Access models were designed to be basic so the front-wheel-drive version would meet the headline £8995 price. The cheapest diesel you could buy was the two-wheel-drive Ambiance at £11,495.

In September 2014, coinciding with a shift in right-hand-drive production from India to Romania, the Dacia had a mild facelift, with a fancier chrome front grille, improved seats, body-coloured bumpers on all models, and a few upgrades across the range. The petrol engine gained another 10bhp, but few of these were sold.

The Dacia Duster’s main enemy is rust. And, yes, that is a strange problem to highlight on cars that are less than four years old – a flashback to 1970s Italian products.

The issue was caused by poor paint preparation and application, and seems to be restricted to cars built in India – one of the reasons why RHD production was moved from there to Romania in 2014. It also seems to be worse on white cars, though whether that’s simply because rust shows up more readily against white isn’t clear.

Quite a few cars have been repainted under warranty, so they should be OK. But take care to check body seams, around sealing rubbers and generally in all inaccessible areas that a spray gun may miss.

Another place to check for rust and water is the scuttle panel, where ineffective or blocked drain valves allow water to collect. Inspect footwells for damp carpets caused by poor door seals and, on the test drive, be aware of rattles from the front doors – it’s a quality issue that can be hard to fix. The same goes for rattly airbags in the steering-wheel boss.

When you take a diesel for a test drive, watch out for flat spots during acceleration, particularly between 1500 and 2500rpm. It doesn’t affect all examples, but it is something dealers have been unable or unwilling to fix; they tend to pass it off as one of those ‘they all do that’ non-issues.

However, it is irritating and, by all accounts, is a common reason why quite a few owners give up and sell their Dusters.

On the other hand, don’t worry about the clunk you commonly get from the front when changing between forward and reverse. It is just the brake pads reseating themselves and isn’t a safety issue.

We all like a bargain, and people who bag themselves a good Dacia Duster are full of praise for the car. Moreover, they are good for towing – at least at the lighter end of the market.

For our money, though, there aren’t enough good Dusters about and logic suggests those may not be the ones up for sale.

Given the various quality and corrosion issues in early cars, you may be better waiting for the later Romanian-built Dusters to work their way down the food chain in a few years’ time.

Our top tug from the Dacia Duster range is the 1.5 dCi Laureate 4×4. It makes sense to go for the top model with all the kit, because it is more pleasant to own and, in used terms, has lost a lot more value than the basic models.

However, we’d avoid the 1.6 Access. There is something intrinsically wrong about a car that looks like a 4×4 but isn’t. The petrol engine is less powerful, thirstier and few were sold new.

The diesel you almost certainly want was, as mentioned earlier, more expensive in the first place, so you’ll struggle to find anything for less than £6000.

Do you agree with our assessment that four-wheel drive is a jolly good idea in this kind of car? It is if you enjoy taking caravan holidays on out-of-the-way campsites or you tour all year round.

Expect to pay £7200 or more for a four-wheel-drive-equipped Duster, because they are holding their prices a little better than the lesser options.

Sadly, those facelift models haven’t had time to shed much value and you’ll struggle to find anything under £10,500.

If you need to fit a Witter flange towbar to a used Dacia Duster, according to a quote we got from PF Jones, it will be £129.12, plus a Witter detachable towbar will be £227.04, fitting extra.

And what about servicing? An interim service for a Duster 1.5 dCi will cost £182 and a full service will come to £278.60, according to Servicing Stop.