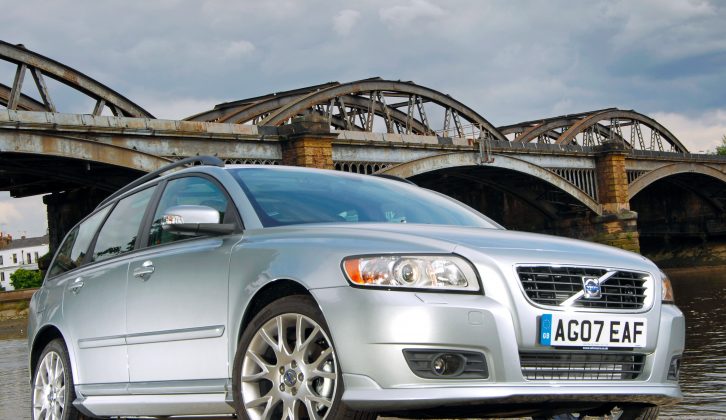 The Volvo V50’s wide range of engines made it a very popular estate – but what tow car capabilities does it have? We think the centre console design still looks great, and it’s good that the steering wheel is adjustable It’s a bonus if you get heated seats up front! 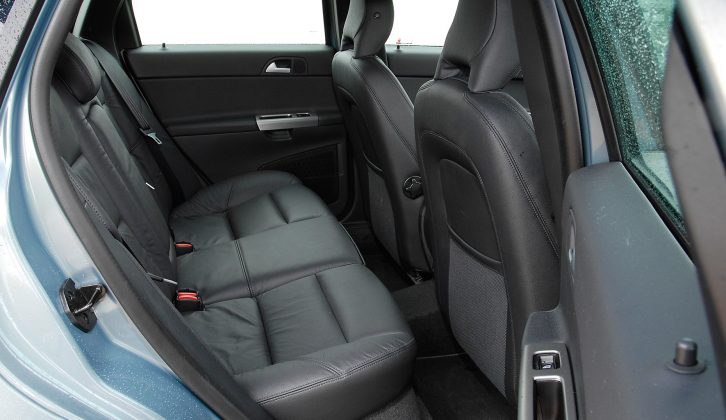 For many years, Volvo’s ‘little’ estate was the brand’s bestselling product. I say little, but that’s a relative thing: it still weighs in at 1.5 tonnes – handy when you’re considering what tow car potential it has.

With the help of Ford, who owned Volvo at the time, the V50 was available with a wide range of engines to suit all needs and pockets, though at the expense of some of the rock-solid build quality we’ve come to expect from the Swedes.

At least that heftiness helps provide a stable towing platform, and indeed the Volvo V50 has proved very popular amongst those looking for a tow car at the lighter end of the towing market.

Their front-wheel drive layout means they struggle a bit with traction on wet hill climbs. If that worries you, there is a rare four-wheel-drive version that should allay your fears.

Launched in 2004 under Ford ownership, the Volvo V50 used the second generation Focus platform, and for further cost-saving got its four-cylinder engines from that range, too.

The V50 got a facelift for 2007 – chunkier looks and LED taillights mark them out. The addition of 1.6-litre petrol and diesel engines broadened the range, though a year later the 2.4 petrol engine was dropped.

For 2010, the whole diesel range was completely revamped and renamed. The D2 had a new 1.6 ‘four’ with a little more power and much better fuel economy.

Trim levels are hard to define with these cars as various ‘option packs’ could be added at all levels, and there was a long accessories list.

From 2007 there was also the popular R-Design package with – amongst other things – a tasteful body kit, unique alloys, a two-tone half-leather interior and blue instrument dials.

The diesel 1.6 has become notorious for turbo failure, at as little as 60,000 miles, which also takes out the oil pump and other parts. Even using pattern parts and a non-franchised dealer is going to mean a bill for over £1000 to fix it, so only consider one that’s been fixed.

All the four-cylinder diesels also need their diesel particulate filters replaced every 75,000 miles or five years (whichever’s sooner), so beware of cars being sold just before this is due or you’ll pick up the circa £750 bill.

Another regular on the Volvo V50 servicing list is fluid flushes every 40,000 miles for the pre-2008 Volvo Geartronic gearboxes. Make sure service records show this has been done.

Many people think all Volvos go on forever, no matter how they are treated, but it’s not so with the V50: it’s too ‘Ford’ for that.

Later cars used a version of Volkswagen’s DSG transmission, which has its own problems. Many early units had to be replaced under warranty. Basically, if an auto shows any sign of malfunction, you’re looking at the wrong car.

Cam belts and tensioners on the five-cylinder engines are best replaced at 60,000-mile intervals rather than the official line, which varies from 108,000 to 144,000 depending on where you look.

Belts have been known to snap, or tensioners fail, at as little as 50,000 miles, so rather than face £6000 for a new engine, £450 for a new belt and tensioner seems like good insurance.

Avoid any pre-2008 V50 fitted with a Teves ABS pump. These Mk60 units are a big problem on quite a few cars, and replacement and resetting the ECU can cost up to £1500. Cars fitted with the Bosch ABS system are not affected, so check the labels.

Simply put: five cylinders good, four cylinders bad. Particularly in diesel form, buying the latter has proved for many to be merely a down payment on a life of misery and expense.

So don’t be tempted, there are plenty of five-cylinder Volvo V50s about and they’re better for towing anyway.

Also, try and ferret out one that was originally specced with the Winter Pack. Not only are the included heated seats a pleasure, but it makes the car easier to sell later on.

The D4 does everything the larger-engined D5 can, but uses less fuel. It’s also worth the small premium you’ll pay over the less powerful D3.

The model we’d avoid is the V50 1.6D. It’s traditional to shame the smallest (or largest) petrol engine here, but in this case the small Ford/Peugeot is so woefully trouble-prone that you need warning off. Just for starters, turbo failure is almost guaranteed with this car.

And what about servicing? An interim service will be £137 and a full service will come to £225 (prices supplied by Servicing Stop).

Don’t be tempted by a four-pot, there are plenty of five-cylinder Volvo V50s about and they’re better for towing