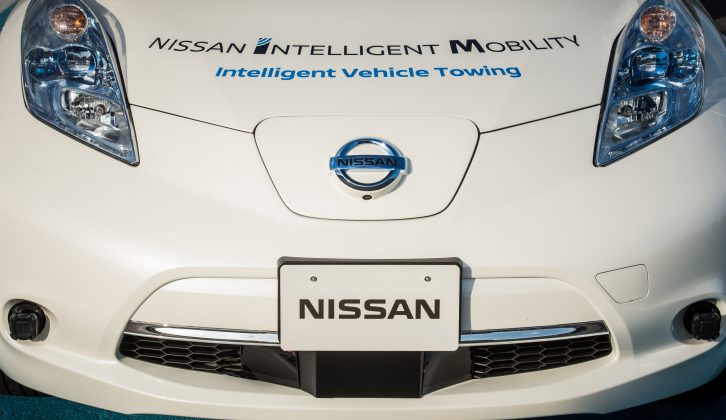 The trial has been running for over a year, but there are no plans to move it onto the public roads Self-driving cars have been in the headlines this year, not always for good reasons. Now Nissan has developed an autonomous tow car.

Don’t worry, you won’t see it towing to a campsite near you anytime soon. However, this fleet of self-driving Nissan Leaf tow cars points to an interesting future.

The vehicles aren’t in use on the road. Instead, Nissan uses its specially modified electric vehicles to pull trailers carrying finished production cars around the Oppama plant in Japan.

How does it work?

Instead of a driver, these tow cars are equipped with cameras and laser scanners to detect lane markings, kerbs and potential hazards or obstacles around the vehicle.

By cross-referencing this information with map data, the tow car calculates its location, and finds the route to its destination without any human help.

The towing car travels within the speed limits of the factory, and automatically stops if it detects an obstacle or hazard ahead, before setting off again when it has determined that the way is clear.

Since the trial began over a year ago, the self-driving cars have completed more than 1600 test runs. Nissan says the technology will be employed at other factories in due course, although there’s no indication as to when Nissan’s production vehicles will be able to tow autonomously.

However, Nissan has said that: “The data and know-how obtained through this project will help to enable broader adoption of autonomous driving technology, in order to provide new solutions to our customers, and to our society.”

Self-driving technology is developing at a startling pace. There are already cars which will effectively drive themselves on the right kind of road, although these systems still require strict supervision from the driver.

I’ve driven a Mercedes-Benz E-Class fitted with Drive Pilot, which steers the car for the driver. But the handbook is quite clear – the driver must keep their hands on the wheel and be ready to take over from the system at a moment’s notice.

“Drive Pilot requires the driver to keep their hands on the wheel,” a spokesman for Mercedes-Benz told me. “It is not an autonomous system, but rather an assistance system that also provides a step along the path to autonomous vehicles.”

In theory, the system is supposed to make long journeys more relaxed. In reality, I felt like a nervous back-seat driver, only one who might have to take responsibility for driving at a moment’s notice.

I would much rather drive myself than constantly second-guess the car’s every decision. I’d be even more nervous with a caravan in tow. Sensibly, Drive Pilot will not operate if the E-Class is towing a trailer.

Systems like this one, and Tesla’s Autopilot system, are stepping stones to fully autonomous vehicles. They work up to a point, but it’s important that those responsible for selling, marketing and driving these cars understand where that point is.

The widely publicised fatal accident in May this year involving a Tesla driven with the Autopilot system, seems to have been an example of a driver failing to supervise the car and maintain responsibility for their own safety.

Towing autonomously on the public road will bring with it a new set of challenges. Any safe system would need to take account of a trailer’s length, width and wheelbase, and ideally whether the trailer is braked or unbraked.

Many modern cars have trailer stability control, and this system will need to feed into the autonomous control of the vehicle to combat any snaking or instability.

How long will it be before we see cars like Nissan’s autonomous Leaf towing to and from campsites up and down the country? I’d guess at least 20 years. And like semi-autonomous and autonomous cars in general, we can expect the technology to continually evolve in the meantime.

According to Richard Cuerden of TRL (formerly the Transport Research Laboratory), a car which can drive autonomously under all circumstances and all types of road is some way off, “probably 10 years plus,” he suggests. “But a vehicle which could drive from Manchester to Birmingham on the M6 is just a few years away.”

Expect towing capability to lag a few years behind, as each step towards full autonomy proves itself and has any teething troubles ironed out.

The self-driving tow car is coming. But it’s going to take a long time to progress from a closed environment like Nissan’s Oppama factory, to complex and unpredictable public roads.

These tow cars are equipped with cameras and laser scanners to detect lane markings, kerbs and potential hazards or obstacles around the vehicle