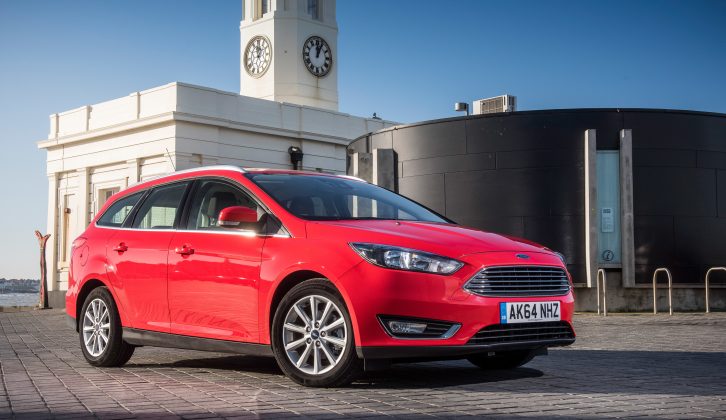 It can’t quite match the quality of the VW Golf, but the facelifted car’s dash is less cluttered – read more in our Ford Focus review This 8in colour touchscreen comes with Sync 2 Ford is going to have a busy year, with several new tow cars to tempt caravanners – including the revised Focus. It may not be all-new like the Mondeo or Ford’s next-generation MPVs, but there have been worthwhile improvements to this popular small family car, so it’s one to bear in mind when deciding what tow car to buy.

Revised styling brings the Focus into line with more recent Ford designs, and there are changes under the bonnet, too. Economy has improved and emissions are down, especially if you opt for the new 1.5-litre diesel that we’ve been driving.

It’s available in two states of tune, and we tested the more powerful of the two. With 120PS (118bhp) it has a little more top-end punch than the old 115PS (113bhp) 1.6-litre engine, which is still available until the spring. Torque is more important than power when towing, though, and the new engine has 199lb ft. That should be enough to comfortably tow a relatively light caravan.

We’ve been driving the estate, which has a kerbweight of 1368kg. That gives an 85% match figure of 1163kg, just under the car’s legal towing limit of 1200kg. So while the 1.5 TDCi can’t tow many four-berth tourers, it is a legal match for the likes of the Sprite Alpine 2 or the Elddis Xplore 304.

On our solo test drive, the engine felt willing and strong. It’s refined and quiet, too. The big selling point, though, is fuel economy. According to the official combined figure, the car is capable of 74.3mpg and emits just 98g/km of carbon dioxide. Even with a tight new engine with just a few hundred miles on the clock, we saw 50mpg or better on most of our journeys.

For heavier duty towing, the 2.0-litre diesel should be a better bet. It’s the same engine we’ve recently driven in the Mondeo, and has 150PS (148bhp) and 273lb ft of torque. That’s serious pulling power for a relatively small car.

The kerbweight increases to 1415kg for the 2.0 TDCi Estate, which gives a healthier 85% match figure of 1203kg. The legal towing limit increases to 1500kg. If you are an experienced tow car driver and happy to tow a caravan weighing between 85% and 100% of a car’s kerbweight, that opens up many more suitable matches.

Ford has tweaked the suspension settings on the revised Focus, but it’s not a night-and-day difference compared with the pre-facelift car. That’s no bad thing, as the Focus was already one of the best small cars to drive. Past experience shows it’s also a very stable tow car.

Expect more of the same from the revised model. The ride is a smidge more comfortable than it used to be, but body movements are still kept under firm control, which usually bodes well for stability with a caravan in tow. The cabin is quieter at motorway speeds than before, which will be welcome on long journeys on your caravan holidays.

Inside, Ford has done away with a raft of buttons to give the centre console a tidier feel. The top two trim lines (Titanium and Titanium X) come with the latest generation of Ford’s infotainment system, called ‘Sync 2’. This uses an 8in colour touchscreen to control a variety of functions, and can be uprated to include satellite navigation for an extra £250. Sync 2 with sat-nav is a £500 option on Style, Zetec and Zetec S models.

As well as making the dashboard less cluttered, Ford has improved the standard of finish. The Volkswagen Golf still looks and feels more upmarket, but the difference is no longer so marked.

So far, so good. However, the new Ford Focus still lags behind a number of rivals in terms of passenger space. Those in the front have enough room, but legroom in the back is relatively tight. A VW Golf has more space, and the Skoda Octavia is much roomier.

Luggage space is also some way off the best small estate cars. The 476-litre boot is fine for a weekly shop, but will be tested by a family of four on a caravan holiday. Several rivals offer more than 600 litres for bags.

It’s not the biggest small estate, but it is keenly priced. The range starts from £17,880, which undercuts the cheapest Golf Estate by £645. Our Titanium X test car costs £24,095, which is competitive for such a well equipped model.

If you can live with the modest boot space, the Ford Focus is a lot to recommend. The manufacturer has successfully updated what was already a very capable car.

Ford has successfully updated what was already a very capable car