Does badge appeal matter to you when wondering what tow car to buy? The Mercedes-Benz C-Class is beautifully finished but, asks our expert, is it worth the extra outlay? 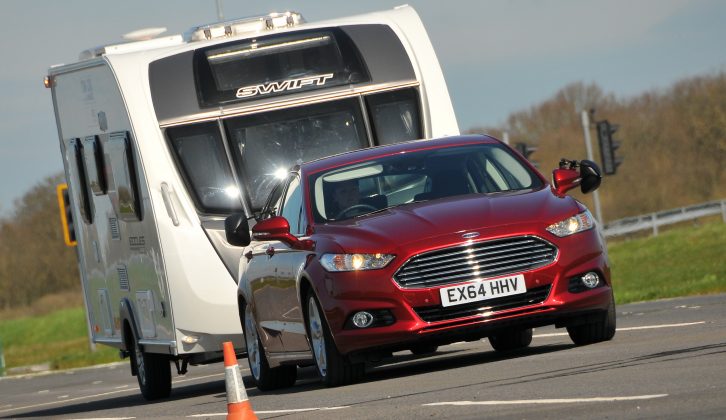 The Ford Mondeo is front-wheel-drive, while prestige rivals from BMW and Mercedes-Benz are rear-wheel-drive Prestige is an odd thing. Some see an upmarket badge and are happy to pay extra for it. Others see snobbery and wouldn’t spend the extra even if they could.

I know a millionaire who until recently drove his dogs for their morning walk in the back of a Škoda Fabia. And a few months ago I was asked for car-buying advice by a young mum-to-be who was happy to spend a big chunk of her monthly pay packet on an Audi because of the badge on the bonnet.

People make these value judgements when deciding what tow car to buy, too. A new Land Rover Discovery costs double what you’d pay for a SsangYong Rexton W, but both are big, two-tonne 4x4s with seven seats and towing limits far higher than the laden weight of most caravans. Of course you want the best tow car you can afford, but by any objective measure, can one be twice as good as the other?

The truth is, few buyers will be choosing between the two as new cars. But there will be plenty of people deciding whether to buy a used Discovery, Audi Q7 or BMW X5, or a new car with a less desirable badge. Or at least a badge that’s generally perceived as less desirable.

Does an upmarket brand name actually stand for anything other than ego and one-upmanship over a pint in the campsite bar? With big 4x4s, I’d argue that it does. In terms of performance and stability when towing, there’s a big gulf between the likes of a Land Rover Discovery and a SsangYong Rexton W. Even the Hyundai Santa Fe and Kia Sorento, which have long since left their budget origins behind but are more affordable than a Disco, don’t tow as well as one of the big-brand heavyweights.

But if you consider a family saloon, hatchback or estate, then I’m really not convinced the premium options are worthy of their premium price. I’m thinking of, in the mainstream corner, the likes of the Ford Mondeo and Volkswagen Passat. In the prestige corner, they face the BMW 3 Series and Mercedes-Benz C-Class.

Traditionally the motoring press, myself included, has played up to class distinctions by referring to the mid-market machines as ‘family cars’ and models with upmarket badges as ‘compact executives’. These labels encourage car buyers to think of the two as distinct groups, whereas in fact they are similar in size.

Is a BMW 3 Series really that much better than a Mondeo? I think the 3 Series is a brilliant car, and I look forward to driving the revised model. But a Mondeo is also very enjoyable to drive, and the fine differences in steering feel and handling which it’s easy to become obsessed with when you’re a car enthusiast really make precious little difference in day-to-day driving. Car launches often take place on sun-baked, half-deserted roads in southern Europe. It’s a long way from the potholed, congested roads of southern England where I live. Most of my ‘real’ journeys involve changing in and out of first gear for 10 minutes, then sitting on the motorway for an hour. On drives like that, on-the-limit steering feel and 50/50 weight distribution don’t matter a jot.

If you look at which makes a more practical tow car, the Mondeo has more cabin space than the 3 Series, especially for rear-seat passengers. There’s more luggage space, too.

It seems a bit unfair to keep picking on BMW, so let’s take a pop at Mercedes instead. Compare the new Volkswagen Passat Estate with the Mercedes-Benz C-Class Estate. As a tow car, the Mercedes has the advantage of a higher kerbweight. The C220 I tested a few months ago has a kerbweight of 1615kg. The nearest equivalent Passat (the Estate with the 190PS engine and a Direct Shift Gearbox) weighs 1581kg. So, there’s an objective and measurable advantage to buying the car with a prestige badge, albeit a small one.

Passenger space? The Passat is roomier. A lot roomier. My measurements show another 6cm of rear legroom. Boot space? There’s 650 litres to fill in the VW, compared with 490 litres with the rear seats upright in the Merc. So, if you’re heading off on your caravan holidays for a fortnight, the VW Passat is a much better bet.

The best thing about the C-Class is the standard of finish. The latest Passat is well screwed together and does a decent job of bridging the divide between mainstream and prestige cars. But there’s no other car of this size which has the design flair or upmarket feel of the C-Class. I could happily sit in the Mercedes’ cabin and just stare at the dash and play about with the switches. Next to the C-Class, the Passat is well put together but rather predictable and unadventurous.

The strongest argument in favour of a prestige car has always been that it will hold its value better than a mainstream model. However, according to What Car?‘s figures the Passat will be worth 44% of the original price after three years and 36,000 miles on the road. The C-Class will be worth 45%. A whole extra per cent, when you’ve paid thousands more for a smaller and less practical car.

Don’t get me wrong, I’m not trying to make out that anyone who buys a BMW 3 Series or Mercedes-Benz C-Class is a fool, or has somehow been duped into paying more money for an inferior machine. In my view the 3 Series is the best car of its kind to drive, and the C-Class is a work of art inside and out. But it’s hard to find a rational argument for the worth of their prestige badges, beyond the shifting and ill-defined nature of prestige itself.

Would you pay an extra £7430 for a lighter, less torquey, less roomy car?