Jeep has significantly improved its Cherokee range for 2014, says Practical Caravan’s tow car expert after time behind the wheel UK market Jeep Cherokees are well equipped and cabin quality is much improved, the 8.4-inch touchscreen coming on all but entry level spec cars Hill Start Assist and trailer sway damping are fitted to all 2014’s new Jeep Cherokees, which is great news for caravanners 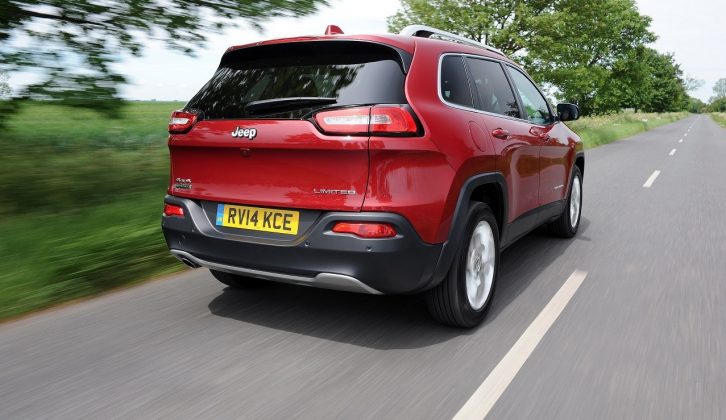 Limited is the top spec line and adds keyless entry, while the Jeep Cherokee range gives a choice of front- and four-wheel-drive models, starting from £25,495

The new Jeep Cherokee looks set to continue the iconic brand’s resurgence in the UK. So far in 2014, sales are up 70% on last year and now the Cherokee has arrived Jeep has a credible rival to the likes of the Audi Q5, BMW X3 and Land Rover Freelander. A range of towing-friendly features mean the Cherokee should appeal to caravanners as much as anyone looking for a tough and rugged SUV.

If you are considering what tow car to buy, I can tell you that the new Jeep Cherokee is certainly a huge improvement on its predecessor. The step-up in cabin quality is the most obvious change. It looks and feels much better screwed together, with soft-touch plastics on the top half of the dashboard and a solid feel to all the switchgear. On all but entry-level spec cars there’s an 8.4-inch touchscreen display which dominates the centre console, and unlike some similar systems, it’s easy to use.

For now, there’s a choice of front-wheel and four-wheel-drive diesels. The range starts at £25,495 for the 140PS (138bhp) front-wheel-drive Cherokee. The 4×4 version (which only sends power to the front wheels unless they begin to spin) costs another £2000. If you want an automatic gearbox, you’ll need to pay at least £29,995 for the 170PS (168bhp) diesel, which isn’t available as a manual. If you really must have a petrol engine, a 3.2-litre V6 will be available on special order from the end of the year.

Jeep expects most buyers to go for the 170PS 4×4, and that’s the version I spent most time driving for Practical Caravan on the launch event. There was no opportunity to tow with the car, but it has the makings of a decent tug. The 1878kg kerbweight gives an 85% match figure of 1596kg, and the braked towing limit of 2475kg is reassuringly high. The noseweight limit is 124kg.

There’s a respectable 258lb ft of torque. On my solo test drive the engine pulled well, helped by the smooth-shifting and decisive nine-speed gearbox, but it’s worth noting that plenty of rivals offer more mid-range muscle (the Land Rover Freelander’s SD4 engine puts out 309lb ft, for example).

The engine is noisy when worked hard (something that’s true whether you choose the 140PS or the 170PS version), but it settles into the background at an even pace. At motorway speeds, wind and road noise are kept in check, but there’s a lot of road noise over course surfaces.

On twisting roads, the Cherokee doesn’t handle with the agility of a BMW X3 and the steering feels light and rather remote. Better to relax and drive at a steady pace, and enjoy the Cherokee’s impressive ride comfort. Only really sharp bumps unsettle the car.

Go for the manual version and the gearshift is precise but rather stiff, and there’s no rest for your left foot when it’s not working the clutch. However, acceleration feels similar with either engine (the 140PS and 170PS versions have the same torque), and fuel economy improves to 44.1mpg on the combined cycle for the two-wheel drive and 41.5mpg for the 4×4. The 170PS automatic returns 39.8mpg.

Whichever engine or spec level is chosen, the Jeep Cherokee has a number of towing-friendly features that Practical Caravan readers will appreciate. All cars have Hill Start Assist to stop the Jeep rolling backwards on a slope, and trailer sway damping. As standard, the car comes with a puncture repair kit which Jeep says can be used when towing if necessary, although it recommends that caravanners should choose the optional full-size spare.

There’s plenty of room for the spare in the 77-litre space beneath the boot floor. From the floor up to the luggage cover, the Jeep’s boot measures 412 litres. Plenty of rivals offer more, but the boot is a good, square shape. Luggage space can be extended by sliding the rear seats forward (there’s 15cm of travel), as well as folding them flat.

In the back seats there’s enough legroom for adults to get reasonably comfortable, while air vents help keep passengers cool.

Buyers have the choice of three spec levels until the more off-road focused Trailhawk arrives at the end of the year. The Longitude spec includes seven airbags, cruise control, a Stop/Start system to turn off the engine when stationary, 17-inch alloys, a six-disc CD player and dual-zone climate control. Longitude+ spec adds the 8.4-inch touchscreen with sat-nav and DAB radio along with an uprated nine-speaker stereo. Top-of-the-range Limited spec cars come with keyless entry (the car will unlock when you pull the door handle so long as you have the key with you), rain-sensitive windscreen wipers, tinted privacy glass, bi-xenon headlamps, heated front seats and an eight-way adjustable driver’s seat.

I’ve already asked Jeep if they will put a towbar on one of their press fleet, so I look forward to towing with the new Jeep Cherokee soon.

The new Jeep Cherokee is a huge improvement on its predecessor